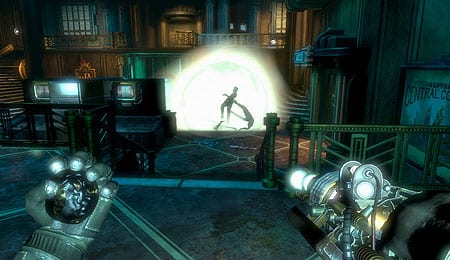 2k released its fourth, and final, installment of downloadable content for BioShock 2 last week, and it’s safe to say this is the one gamers have been waiting for. Unlike the first three, which contained two multiplayer expansions and a self-contained set of ADAM gathering challenges, Minerva’s Den expands Rapture’s narrative, telling a story surrounding the city’s AI — nicknamed “The Thinker.”

The Thinker is the brainchild of Charles Milton Porter, who was summoned to Rapture by Andrew Ryan to construct the evolving AI. Porter’s partner, Reed Wahl, becomes obsessed with The Thinker and betrays Porter, leading to a falling out with Ryan. The story picks up with you, an Alpha Series Big Daddy known as “Subject Sigma,” working with Porter to reclaim The Thinker and escape Rapture.

Told in typical BioShock fashion through transmissions and audio logs, the tale feels far more personal than what was presented in the main game itself. The voice acting and dialogue are once again fantastic with well developed characters, both new and familiar, adding depth to the story. Porter’s back story, in particular, is exceedingly well done and makes him one of the few truly redeeming characters found in Rapture throughout the entire BioShock saga.

Even though you’re no longer playing as “Delta,” the controls are identical and combat pretty much remains the same as well. That’s not to say nothing has changed, though, as you have access to a new weapon (the Ion Laser), new plasmid (Gravity Well) and will also encounter some new takes on familiar foes such as the Lancer Big Daddy and elemental splicers. The biggest difference is that you’re granted access to items at different intervals in Minerva’s Den, which may force some out of their comfort zone when it comes to mixing and matching weapons and plasmids based on what’s available.

Combat can be tough as these new areas seem even more densely populated with splicers and, as you might expect in a high technology area, there are also plenty of bots. You start off sparsely equipped as well, and will need to find weapons and plasmids just like you did in BioShock 2. Essentially, Minerva’s Den plays like a streamlined version of the main game, though because it’s shorter you’ll want to maximize your opportunities to earn ADAM, which means gathering takes on added importance — if anyone found the pacing of BioShock 2 to be too slow, Minerva’s Den remedies that.

Excellent from start to finish, Minerva’s Den is the best add-on I’ve played since Fallout 3’s Broken Steel. For just 800 MS Points (US$9.99) you get a memorable four-to-six-hour ride through Rapture full of the game’s signature art style and storytelling. It’s a must buy.

By Herija Green
This entry was posted on Saturday, September 11th, 2010 at 1:08 pm and is filed under Herija Green, Video Game Reviews. You can follow any responses to this entry through the RSS 2.0 feed. You can leave a response, or trackback from your own site.