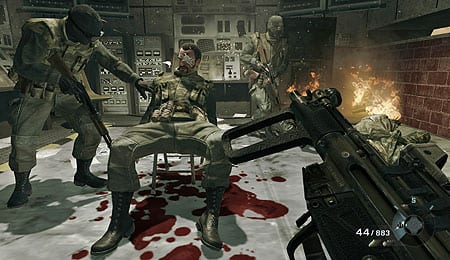 Black Ops pulls no punches when it’s time for bloodshed.

When it comes to institutions in modern gaming there is Activision’s Call of Duty series and then there’s everything else. Treyarch, which is responsible for this year’s highly anticipated installment Call of Duty: Black Ops, has long taken a backseat to Infinity Ward, the developer of Modern Warfare 2. However, given the drama surrounding the departures of Jason West and Vince Zampella it was doubly important that Treyarch step up and deliver with Black Ops. Was it successful in stepping out of Infinity Ward’s sizable shadow? Read on to get our verdict.

I’ve owned and played countless hours of every game in this series since Call of Duty 3, and in that time there have been no substantive changes made to the controls. It’s a familiar system that serves the game well and, honestly, one that doesn’t need updating.

As you’d expect from a big budget title like Black Ops, the visuals are extremely polished. Beyond the detail work, however, what really defines this game is the feeling of chaos that permeates the campaign. Explosions are massive and satisfying. Friendly and enemy troops engage one another in firefights and even hand-to-hand combat. It really makes certain segments of the game feel dizzying, and yet even with all that going on, the frame rate almost always remains steady.

Surprisingly, some of the game’s best isolated moments graphically happen when things are at their quietest. Given the breakneck pacing throughout much of Black Ops, those “calm before the storm” situations offer a welcome reprieve that allow you to soak up your surroundings. Whether sneaking through a Viet Cong camp or traversing snow-covered mountains, it’s very impressive.

Audiophiles will no doubt love the booming sounds of battle, which are unapologetically delivered with tangible impact. Explosions thunder through the speakers and enemy gunfire whizzes by as you engage dozens of hostiles, adding to the game’s manic approach along with a soundtrack that matches the intensity of the sound effects every step of the way.

Voice acting is good and the dialogue is solid, too. However, your squad’s constant need to badger you about enemy locations or your responsibility to complete an objective gets old real fast. I really don’t need to be reminded every five seconds that I’m trying to destroy a specific enemy stronghold or that there are snipers in the trees. Clearly the developers meant for their direction to be helpful, but it’s done with such frequency that it becomes more of an annoyance.

Lastly, I found the casting of Ice Cube as one of your squad mates to be a little distracting. Yes, there are other known actors in here (such as Ed Harris and Gary Oldman), but Cube has such a distinct voice that it served to take me out of the experience at times. Of course, I’m a long-time hip-hop aficionado, so others may not have that issue.

Throughout Treyarch’s work in the Call of Duty series, one thing has remained constant — all of its games were set during World War II. However, with the current popularity of modern shooters, the developer finally casts aside that timeframe (for the most part) and places us in the 1960s for some Cold War action. The insertion of actual historical figures, like John F. Kennedy and Fidel Castro, into the storyline gives it a plausible base, something Modern Warfare 2 lacked.

You’re cast in the role of Alex Mason, a soldier being interrogated by unknown captors. Things cleverly branch out from here as you find yourself playing through Alex’s memories of previous missions in an effort to uncover the answer to a riddle: what do the numbers mean? That piece of vital information is rattling around somewhere in your brain…you just can’t remember. It’s not the most original plot device ever dreamed up, but it maintains an undertone of mystery as you travel to different times and locations.

Where the campaign settles on very familiar ground is with the pacing and massive firefights that seem to saturate every level. In fact, in many instances it feels like Modern Warfare 2 with a 1960s paint job as on-rails snowmobile segment is replaced by on-rails motorcycle escape. Destroying enemies from above is now guiding a friendly squad from above. Guns have grenade launchers attached to them. There’s a section where you control homing rockets (did those exist during Vietnam?). Slow motion breach and clear is present and so on. All these things are fun to do, but make no mistake about it — you’ve done most of them before.

Friendly and enemy A.I. is what you’ve come to expect from the Call of Duty series, which is to say, uneven. On the lower difficulty settings your foes will practically stand there and let you kill them without protest. Amp it up to Veteran and suddenly everyone is a crack shot that knows exactly where you are at all times. Teammate A.I. is consistently unhelpful as they seemingly either hide in cover or stand in the open and don’t shoot enemies. They do excel at nagging, however.

Also worth noting is that Treyarch appears to have made a concerted effort to make this game gritty with graphic scenes of torture, throats being slit and situations where the focus are the eyes of the person you’re killing. So while Black Ops may not have anything the equivalent of MW2’s “No Russian” level to get parental watchdog groups up in arms, this is certainly not a kinder or gentler Call of Duty.

Ultimately, the campaign produces plenty of thrills and the mysterious nature of the numbers serves to tie what would otherwise be a series of unrelated events together while providing an added impetus to finish other than just racking up kills and/or achievements.

Of course, modern first-person shooters glean nearly all of their replay value from multiplayer, and arguably no series has mastered that aspect better than Call of Duty which, following the release of Black Ops, has seen each of its last four titles rank among the ten most played games on Xbox Live. Given that continued success, it’s no surprise that the fundamentals haven’t changed much.

The game comes packed with 14 adversarial maps and, as usual, you’ll have access to all your favourite modes like Team Deathmatch, Capture the Flag and Domination. The new locations are good, featuring a fairly diverse selection of structures and environments within which to kill people. Perks and kill streaks return as well, and while some adjustments have been made to fit with Black Ops’ timeframe it’s easy to spot MW2’s influence — such as identical kill streaks slightly repackaged.

Perhaps the biggest change to multiplayer is the addition of a new currency system called “CoD Points” (abbreviated as CPs), which are now used to purchase guns, perks, equipment and even secondary customization options like unique emblems and targeting reticules. In a way it downplays the importance of leveling and completing challenges, though many items still require you to reach a specific level before offering you the option of buying them.

Beyond just spending your CPs, you can also risk them on the outcome of Wager Matches, which introduce four entirely new gameplay modes: One in the Chamber, Gun Game, Sharpshooter and Sticks and Stones. Of that group, Gun Game is the standout offering. In this mode, your gun changes after each kill with the first person to exterminate an opponent with all 20 guns earning the victory. It’s a cool new system and a welcome breath of fresh air to a mostly familiar feature set.

Rounding out Black Ops is Zombie Mode, an unlockable from World at War that is accessible from the start this time around. Nothing has really changed since then as you’re still tasked with trying to fend off wave after wave of the undead. You earn money by killing zombies, which is then used to buy new weapons, access new areas and more. There’s one map available initially with another unlocking after you complete the game (those that buy the Hardened Edition will have access to four more). If you liked it before, there’s no reason you wouldn’t enjoy this time around.

As if that weren’t enough, there’s also a hidden arcade game (Dead Ops) and a new fully-featured Theater system that allows gamers to share clips, screenshots and more. I’m not ready to put it on the same level as Halo yet, but it’s a welcome addition nonetheless.

In a year where games like Medal of Honor and Battlefield: Bad Company 2 aimed to topple Call of Duty, Black Ops is a reminder why this series has worn the crown for so many years. And while it’s only natural to compare it to Infinity Ward’s efforts, Black Ops stands comfortably on its own as a top-notch shooter that’s loaded with replay value.

By Herija Green
Tags: Activision
This entry was posted on Wednesday, December 1st, 2010 at 5:22 pm and is filed under Herija Green, Video Game Reviews. You can follow any responses to this entry through the RSS 2.0 feed. Both comments and pings are currently closed.