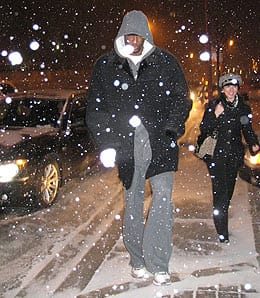 Shockingly, Erick Dampier opted for a warm weather location to play in.

Welcome to the Week Six edition of The Wire Troll, our weekly look at players that may be available on your league waiver wire, but could see a spike in Fantasy value due to a variety of circumstances. Well, U.S. Thanksgiving is over, and hopefully you and yours had a safe and happy holiday. As the weekend wanes, you’re faced with two of Thanksgiving’s toughest dilemmas: What to do with all this leftover turkey, and how do I politely chase away the relatives that somehow construed a dinner invitation as a free pass to camp out in my house all weekend? As a public service, The Troll would like to take a moment to remind you how to wend your way through this complex conundrum.

Day One: Impress your relatives with what you can do with leftovers.
Day Two: Reaching a bit but still impressive; your relations exchange a few nervous glances during the meal.
Day Three: “Turkey, um…chili, is it? How…original.”
Day Four: Your relatives pack up and leave – after a hearty breakfast of turkey omelets and turkey sausage – rather than face the lunchtime reality of your turkey tetrazzini flambe.

Nicely played…and you still have time to set your lineup for that goofy weekly lineup league you insist on staying in even though the format is hopelessly outdated and based primarily on good fortune rather than skill.

It’s short and sweet this week, gang: Hey, Superman had Kryptonite and The Troll has tryptophan.

Erick Dampier, Miami Heat: If your league is deep enough, and your need is dire enough, Dampier may be worth adding for the boards and blocks he’s bound to provide when he makes it onto the court for the Heat. He signed his deal Tuesday, and he’ll need time to round into shape, but he should be on the floor by the end of this week. Just an early heads up for those of you with Olympic-sized player pools.

Shaquille O’Neal, Boston Celtics: Shaq Daddy is averaging only 23-plus minutes over his last four games, but he has managed to post 15.5 points, nine boards and one block per outing. There’s no telling how long he can keep this up, but while the Diesel is rolling he’s worth owning in deeper leagues.

Grant Hill, Phoenix Suns: Hill has woke up the echoes over his past eight games, averaging 17.1 points, 3.8 rebounds and 2.9 assists. His three-point shot is all but gone, and his health will always be a concern, but the cagey vet is showing flashes of the skills that made him one of the game’s best players Back in the Day. He should be owned in leagues larger than 12 teams until he cools off.

Nick Young, Washington Wizards: John Wall still appears to be hurting, and as a result Young has been asked to shoulder more of the offensive load in DC. Over his last seven games, the Wizards’ sixth man has averaged 16.1 points and 1.2 treys and, while he won’t give you much in the way of peripheral stats, he should continue to shoot the rock at will while Wall is less than 100 per cent. Young’s lack of versatility makes him more of a specialist than a universal add, but he should certainly be rostered in deeper formats.

Amir Johnson, Toronto Raptors: He makes a rare repeat appearance on the Troll thanks to the fractured foot suffered by starter Reggie Evans Saturday night. Johnson looks like he’ll move into the starting lineup immediately, and we’ll see if the talent he has flashed when given starter’s minutes can make him a Fantasy force. Foul trouble will remain an issue, but Johnson becomes a nightly double-double threat as Toronto’s starting power forward. He should also pitch in at least one block and close to one steal per outing, and should be picked up in most formats.

Leandro Barbosa, Toronto Raptors: With Jarrett Jack now mired behind Chris Paul in New Orleans, quite a few backcourt minutes have opened up in Toronto. Barbosa looks to be the prime beneficiary of that vacancy, as he has averaged 12.3 points, 2.7 dimes and one three-pointer since returning from injury three games ago. The Brazilian Blur is an injury risk, but with the Raps looking for someone to score the ball, he should provide modest production of points, treys and assists.

Luther Head, Sacramento Kings: Coach Paul Westphal is the New Don Nelson, and right now Head is at the top of his list of Mostest Favourite Players. Since moving into the starting lineup five games ago, Head is averaging 11.2 points, 3.8 rebounds, 3.2 assists and 1.6 treys. He is something of an oddity in Sac-Town, as he actually plays defense – so he may be a fixture in the rotation for a while. Grab Head if you’re in need of treys and modest help elsewhere, but be mindful of Westphal’s tendency to tinker with his lineup.

By Buck Davidson
This entry was posted on Saturday, November 27th, 2010 at 2:11 pm and is filed under BASKETBALL, Buck Davidson, The Wire Troll. You can follow any responses to this entry through the RSS 2.0 feed. You can skip to the end and leave a response. Pinging is currently not allowed.