Jim Thome Gets Some Love 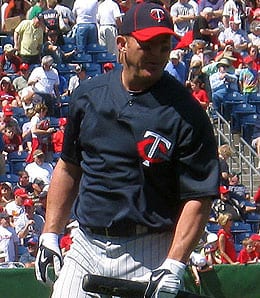 It was nice to see Jim Thome get some consideration for the Edgar Martinez Outstanding Designated Hitter Award, given to Vladimir Guerrero on Wednesday. Am I the only one that didn’t know such an award existed? At any rate, in limited action, Thome enjoyed a pretty darned good season for the Twinkies, swatting 25 homers in just 340 plate appearances and earning a little waiver wire love from us late in the season.

Thome is one of those “more valuable in real life than Fantasy” types, especially since he limits your team’s flexibility by not qualifying anywhere defensively. He’s a free agent this offseason, and should come cheaply for any team that needs a power bat off the bench or the left-handed portion of a DH platoon (which seems like a major waste of a roster spot). I sure hope he lands a gig, as Thome is just 11 homers shy of becoming the eighth players to reach 600 for his career, and he’s one of the few on the list that has not (as of yet) been implicated in some kind of PED scandal.

The Twins, meanwhile, may have significantly less money to re-sign Thome after winning the rights to negotiate with Japanese second baseman Tsuyoshi Nishioka of the Chiba Lotte Marines. The first Pacific League player to record a 200-hit season since Ichiro Suzuki, Nishioka won the Pacific League batting title last season with a .346 mark.

The Red Sox were one of the other teams that bid for the negotiating rights, won by the Twins for approximately $5 million.

So we now know that Orlando Hudson probably won’t be back with the Twins next season. Minnesota had offered him arbitration but had a deal in place to ensure he’d decline it and remain a free agent. The Twins could still re-sign Hudson, but obviously wouldn’t bring back both Hudson and J.J. Hardy, and even if they lose Hudson, at least they’ll now get a compensation draft pick.

By RotoRob
This entry was posted on Friday, November 26th, 2010 at 4:03 pm and is filed under BASEBALL, RotoRob. You can follow any responses to this entry through the RSS 2.0 feed. You can leave a response, or trackback from your own site.