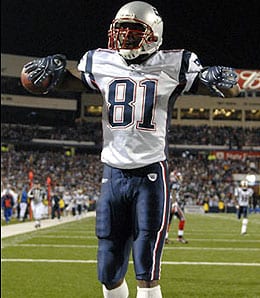 How long will it be before Randy Moss gets sent packing by the Titans?

Even without Randy Moss, Tom Brady has led the Patriots to the number one spot with the best record in the league. Moss, by the way, who has impressively worn out his welcome on teams teams in half a season, will now see what he can do about poisoning the Tennessee Titans.

Matchups of the Week: Miami at Baltimore, Indianapolis at Philadelphia and Pittsburgh at Cincinnati on Monday Night Football.

Biggest Drop: Three teams have dropped six spots each, the Minnesota Vikings, the Arizona Cardinals, and the Denver Broncos.

1. (3) New England Patriots, 6-1:  Even without Randy Moss, Tom Brady has continued to find a way to win with BenJarvus Green-Ellis and Brandon Tate. On Sunday, the Pats travel to Cleveland to face the Browns, who are giving up 244.1 passing yards per game.

2. (1) Pittsburgh Steelers, 5-2: The Steelers discovered they do have some problems in their loss to the Saints, but with a trip to Cincy to take on the struggling Bengals, Mike Wallace should get back to getting long TDs.

3. (4) Baltimore Ravens, 5-2: After a close call in OT against the Bills, the Ravens’ bye week should have helped them work out the kinks and break out against the Dolphins on Sunday.

4. (2) New York Jets, 5-2: Getting shut out against the Packers shouldn’t worry the Jets too much. Their defense still played well and did not give up a touchdown all game. New York plays Detroit next where the offense should get rolling behind LaDainian Tomlinson.

5. (5) Indianapolis Colts, 5-2: Peyton Manning led his injury-prone team to another victory over the Texans after being dominated by Arian Foster in Week One. The Colts’ defense may have some trouble with the Eagles’ running game if Michael Vick is back.

6. (7) Atlanta Falcons, 5-2: The Falcons have a tough schedule coming up four straight games against winning teams. They will need to rely more on their running game if they want to win the division now that the season is halfway done.

7. (11) New York Giants, 5-2: Eli Manning and the Giants have won four straight games and travels to Seattle where they hope to conquer Qwest Field’s noise and beat the Seahawks. Look for Hakeem Nicks to have another big game.

8. (13) Green Bay Packers, 5-3: If the kind of defense the Packers showed when they beat the Jets on Sunday returns against Dallas this week, then they will be a in great position, having won three in a row before their bye week. Aaron Rodgers could use help from his running game, which is definitely struggling without Ryan Grant, but there is enough talent to get them through.

9. (8) Tennessee Titans, 5-3: After the Titans’ third-down defense cost them the game, they have plenty of time during their bye week to figure out some discrepancies before they go to Miami in Week Ten. It also seems unclear whom they want to play at QB, but regardless of who gets the nod, he’ll have a new target in Moss.

10. (6) New Orleans Saints, 5-3: The Saints earned a huge win over the Steelers as Drew Brees was able to get it done without a running game. However, if the Saints are going to beat out the Falcons, they will need Reggie Bush and Pierre Thomas healthy.

11. (14) Kansas City Chiefs, 5-2: After handing the Bills a second straight OT loss, the Chiefs travel to Oakland to try to prove who the new leader of the AFC West is. Picking up Randy Moss off waivers could have helped lead KC to a division title, but it didn’t happen.

12. (9) Philadelphia Eagles, 4-3: With Michael Vick coming back, we will see how the Eagels’ playoff hopes fair against the Colts. LeSean McCoy and Vick should be able to run big against a struggling Colts’ rush defense.

13. (10) Houston Texans, 4-3: Arian Foster averaged 6.8 yards on 15 carries against the Colts on Monday night. Only down by two possessions, the Texans relied too much on the passing game when their running game was so promising. Their defense could have more trouble against the Chargers’ offense this week.

14. (19) Tampa Bay Buccaneers, 5-2: Cadillac Williams has 84 carries for 212 yards and no TDs; LeGarrette Blount has 43 carries for 222 yards and three TDs. I think the Bucs have found the running back they were looking for.

15. (16) Miami Dolphins, 4-3: Thanks to Dan Carpenter’s five field goals the Dolphins won, however Miami was unable to pick up Moss, who could have freed up space for Brandon Marshall to get to the end zone.

16. (28) Oakland Raiders, 4-4: If the Raiders beat the Chiefs, they will be tied for the lead in the AFC West. Oakland will need Darren McFadden to have another big game to help get past Kansas City.

17. (12) Chicago Bears, 4-3: After two straight losses, the Bears are coming off their bye week and now must face the Bills. Could Chicago be upset, or is it being handed a win on a silver platter? If da Bears’ offensive line improved and they run the ball more, then they have it in the bag.

18. (16) Washington Redskins, 4-4: What is going on with this team? Rex Grossman playing over Donovan McNabb on the potential game-winning drive? Are you kidding me? The Redskins’ bye week comes at a great time after losing to Detroit.

19. (25) Jacksonville Jaguars, 4-4: It seems to be a toss up each week whether David Garrard plays well or not; at least he had an excellent game against America’s team. Hopefully Maurice Jones-Drew’s recent domination has shown the league that he is not on the downside of his career already.

20. (23) Seattle Seahawks, 4-3: The Seahawks are going to need the help of the crowd at home to beat the Giants. Seattle’s offensive line will have to work hard to keep the Giants’ defenders at bay.

21. (21) St. Louis Rams, 4-4: Last week, Sam Bradford put another win under his belt. The Rams were rumoured to have considered making a play for Moss, something that might have sparked their team to a division title in the NFC West.

22. (24) San Diego Chargers, 3-4: If the Chiefs lose this week and the Chargers win, San Diego will be in decent shape with a Week Ten bye. With Ryan Mathews getting healthy, the Bolts are starting to play better, and Antonio Gates has been the man, with a league-leading nine receiving touchdowns.

23. (17) Minnesota Vikings, 2-5: The Vikings’ big move to get Moss for a draft pick has completely flopped, as he was waived earlier this week. The way things are going this season, Brad Childress could get the boot as well.

24. (18) Arizona Cardinals, 3-4: Derek Anderson could be coming back as the starting QB, and Steve Breaston is back, so he can put up big numbers with teams focusing on covering Larry Fitzgerald.

25. (20) Cincinnati Bengals, 2-5: The Bengals have lost four straight and now they have to play the Steelers. Cincy can’t get a break, although Terrell Owens is have a much better season than last year.

26. (30) Cleveland Browns, 2-5: Let’s see how Colt McCoy fares against the new number one team after upsetting the Saints in Week Seven and getting more bye week practice as the starter last week.

27. (29) Detroit Lions, 2-5: Matthew Stafford is back and now trying to compete with Sam Bradford to see who’s the better number one draft pick.

28. (22) Denver Broncos, 2-6: The Broncos’ lack of a running game is showing through their defense after losing four straight. I bet they’re happy their bye week came now, giving them a chance to regroup before returning for two divisional games.

29. (26) Dallas Cowboys, 1-6: America’s team is without Tony Romo, and may soon be without the “America” part. Dez Bryant showed why he didn’t want to carry Roy Williams’ pads after getting more targets than him.

30. (27) San Francisco 49ers, 2-5: Troy Smith may be the spark the 49ers were looking for going into their bye week before playing the Rams.

31. (31) Carolina Panthers, 1-6: At least the Panthers pulled out one win so far, because the rest of their schedule may make it tough for them to win another game.

32. (32) Buffalo Bills, 0-7: Two straight overtime losses has got to bring morale down, but perhaps Ryan Fitzpatrick and his beard can lead the Bills to a win over Chicago this week.

By Trevor Blake
This entry was posted on Wednesday, November 3rd, 2010 at 7:29 pm and is filed under FOOTBALL, NFL Power Rankings, Trevor Blake. You can follow any responses to this entry through the RSS 2.0 feed. You can leave a response, or trackback from your own site.