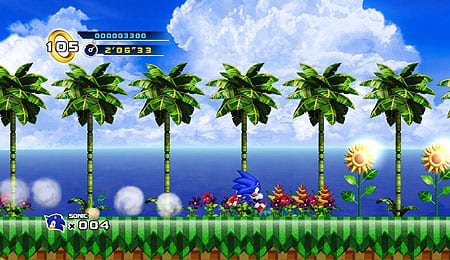 Like all hedgehogs, Sonic creates puffy little cotton balls as he runs.

As a kid that grew up with a Sega Genesis, I was widely mocked by my Nintendo-fanboy friends — until Sonic The Hedgehog came out. Well, that and the bloody version of Mortal Kombat, but Sonic had more of a wide-reaching appeal and it shifted Nintendo’s hold on the 16-bit industry into a competitive race between the two console developers. After that, we all graduated to the world of Playstation and XBox, and Sonic disappeared into a variety of party games and strange appearances (Sonic & Mario At The Olympics, anyone?). Sega’s gone back to its roots now, and Sonic The Hedgehog 4, Episode 1 is a complete throwback to the days of 16-bit Sonic speeding across the screen. Did it succeed like other throwbacks such as Bionic Commando: Rearmed?

This is as traditional a Sonic The Hedgehog game as they come, so you could play it using a Sega Genesis controller. You use the directional pad or left analog to move Sonic, and one button is all you need. When Sonic is upright, it’ll cause him to jump. When he’s in the air, he can use it to do a homing attack (where he launches towards an enemy or object). When you press down, it revs Sonic up to go to full speed.

That’s really all you need to do to get through the game. Like I said, it’s old-school through and through, and if you somehow hooked up your old hefty Genesis controller to your PS3 or XBox 360, it’d feel like you stepped through a time warp.

If you took a kid from 1991 and showed him Sonic 4, he’d freak out. It doesn’t just look like an old Sonic game, it looks like the 16-bit graphics were inserted into cel animation, painted, and brought to life. While it won’t win any points for realism, the bright colours, crisp graphics, and smooth animation take everything that Sonic was and brings it into HD. And old-school fans will appreciate the intro, complete with a splashy Sega logo.

Sonic isn’t necessarily a graphic-intensive game, though, and outside of the HD resolution, the game could have been built on last generation’s hardware. The sound is straight out of the Genesis era, with the familiar ring chimes and jump sound effects. The music is similar — no epic orchestral score here — though the instrumentation obviously isn’t limited to the sound chip in a 16-bit machine. The game takes some familiar cues and melodies from old Sonic games, and should bring about plenty of nostalgia when the soundtrack plays.

Let’s get this out first: if you loved the traditional Sonic combination of speed and platforming, then you’ll be at home here. You’ll recognize levels based on some favourites from previous games, and the controls will feel intuitive. Sonic 4 expands on the old-school gameplay by having bigger level design that encourages replayability, and the homing mechanism is a nice addition to Sonic’s feature set, providing just enough of a new dimension to the platforming for something a little bit different.

The level designs are bigger than the original games, though similar in style with plenty of loops and corkscrews, along with massive jumps and springs that send you flying into another spring. If the speed of the original Sonic games proved to be disorienting for you, you won’t enjoy this. However, if you liked the mix of platforming and pace, you’ll feel right at home. The expanded levels hint at places to go back and explore, but there’s also a timer for you to track your score on the online leaderboard.

That’s the good news. The bad news? One minor-but-major detail in the control design spoils a lot of the speed of the game. In the old Sonic games, you started out on a trot, then Sonic ran, then he curled up into a ball and flew. In this iteration, you start out with a walk, then a trot, then a run. That’s right, a walk. Sonic never walked anywhere, and this painfully slow movement seems counterintuitive to the game’s natural premise of speed. In short, it’s really annoying, especially when you stop and need to get going again.

My other major complaint is a lack of multiplayer. One of the best parts of Sonic 2 was the addition of competitive multiplayer with the second player taking control of Tails. With today’s online functionality and widescreen TVs, it seems simple to create both local and online multiplayer for this sort of thing. I can’t tell you how many hours of my middle school life were spent by racing the same levels over and over on my friend’s copy of Sonic 2, and it’s too bad that it wasn’t implemented in this new version.

Sonic 4 is a trip into nostalgia with a fancy new paint job. Old-school gamers and platform junkies will appreciate it, as it’s lovingly crafted and well-designed, though not without its flaws. It won’t convert fans like the original Genesis games did back in the early 1990s, but it’s plenty of fun, especially for those that grew up on the speedy blue blur.

By Mike Chen
This entry was posted on Wednesday, November 3rd, 2010 at 9:09 pm and is filed under Mike Chen, Video Game Reviews. You can follow any responses to this entry through the RSS 2.0 feed. You can skip to the end and leave a response. Pinging is currently not allowed.