2010 AFL Roundup: Eric Hosmer is Back 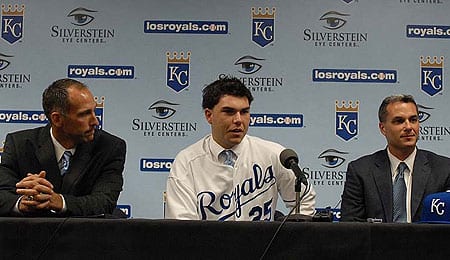 The Royals are extremely high on prospect Eric Hosmer (centre).

Our trusty baseball writer Tim McLeod is on his way to the Arizona Fall League, and promises to file some scouting reports on some of the game’s brightest prospects. To whet your appetite for prospect-laden baseball, we thought we’d check in with some happenings from the first two weeks and change of the 2010 AFL schedule.

The first baseman started slowly in the AFL, then began to heat up last week, but has slipped this week (0-for-13 in the last three games). Still, even if Hosmer’s AFL numbers aren’t jumping off the page (.184 BA and 476 OPS), he’s still been productive, driving in ten runs in 11 games. And considering he’s played a ton of ball this season (he was with Team USA for the 2011 Pan Am Games qualifying tournament), you’ve got to cut the kid some slack. Hosmer has returned to top prospect status, and has put himself within a year or two of the bigs along with a very nice wave of talent the Royals have on the way that may finally help turn this team around.

One player that is turning heads in the AFL is Seattle second base prospect Dustin Ackley, our No. 19 prospect heading into the season. On Monday, he was 2-for-5 with a homer and two RBI, his second straight multi-hit game to raise his average to .344 with five extra-base hits in ten games. I had assumed Ackley needed another half-season in the minors, but he may change my mind. Seattle is likely to decline its option on Jose Lopez, and if Ackley is deemed ready, he’ll take over at second base, shifting Chone Figgins over to the hot corner.

Milwaukee outfielder Caleb Gindl has also raised his stock this fall. He first drew our attention last year when he enjoyed a solid but injury-shortened season in the FSL. Gindl moved up to Double-A this year, and while he experienced some growing pains, he still enjoyed a somewhat productive season.

In the AFL, however, the 22-year-old has looked like a bona fide prospect despite his small stature (5’9”, 185). He hit safely in his first nine games before going hitless Monday and is now batting .325 through ten AFL games with ten runs, four doubles, two homers, five RBI and good strike zone judgment. Because of his size, Gindl is one of those players, like Reed Johnson before him, that will have to prove himself at every level, but his performance this fall has definitely put him on the map.

For some, like Mets’ pitcher Nicholas Carr, the AFL is an opportunity to get back on the radar. Carr missed almost a year of action because of Tommy John surgery, returning in June and pitching out of the bullpen – he was a starter before getting hurt. Now 23, Carr has seen a lot of action in the AL, but his command has been spotty. Still, at this point, it’s more about getting his innings in and gaining some experience against better competition. Carr will probably pitch at Double-A next season, and his future is likely in the bullpen, something that seriously affects his status as a prospect. But if he adjusts to the higher levels quickly, his route to the majors will probably be a lot faster as a reliever than as a starter.

Another Met we’ve been tracking in the AFL is 23-year-old Dominican shortstop Jordany Valdespin. He didn’t have a great season, failing to achieve similar results at Advanced-A that he had in his brief stint at that level in 2009. And upon promotion to Double-A, Valdespin’s extra-base pop went AWOL.

In the AFL, however, this kid has shone. On Monday, he recorded his second straight three-hit performance, running his hitting streak to six games and raising his overall AFL mark to .355 through 15 games. Valdespin has 13 runs, a homer and 11 RBI, and while his batting eye remains weak, he’s been running wild on the bases with seven thefts already. This is a prospect that until now had not popped up onto our radar. Well, he’s there now.

Derek Norris is a catching prospect that just made our Top 45 in the spring, but was perhaps in danger of falling off next year’s list after a middling, injury-shortened season at High-A in 2010. However, this 21-year-old Nationals’ prospect has been launching balls in the AFL, on Monday doubling and driving in another two runs, running his total to 14 RBI in ten games. He’s hitting .300 with three homers, is showing his usual amazing batting eye and has even swiped a couple of bases. No, Norris hasn’t thrown a no-hitter in his spare time…what a stiff. Seriously, though, this kid is back on track as one of the top offensive catching prospects in the game.

By RotoRob
This entry was posted on Tuesday, November 2nd, 2010 at 12:56 pm and is filed under BASEBALL, Prospects, RotoRob. You can follow any responses to this entry through the RSS 2.0 feed. You can leave a response, or trackback from your own site.