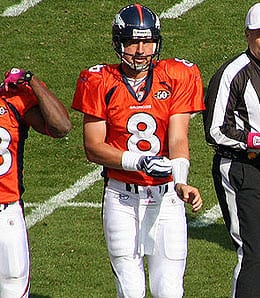 I lost Dallas Clark and now Tony Romo, so I traded Larry Fitzgerald for Kyle Orton this morning. Sam Bradford is my No. 2 quarterback, but both are on bye for Week Nine.

I must use my waiver wire No. 2 pick on Josh Freeman, Jon Kitna or Chad Henne and drop Bradford. Which QB do you suggest for Week Nine only?

It’s pretty amazing how quarterback play in Arizona has regressed to the point that trading Fitzgerald, a surefire first- or second-round pick this year, for Orton, probably undrafted in many leagues, was met with a solemn nod on my end. Good job, Ken Whisenhunt. Way to have a plan post-Kurt Warner.

As for your choices, they’re all pretty marginal. Everyone is on the road against solid or better pass defenses. Under other circumstances, I’d take my chances with Kitna because of all the guys they have, but Green Bay shut that offense down with Romo at the helm last season, and the Packers are familiar with Kitna from his Motown days. Freeman played pretty well in Atlanta last year (250 passing yards, two TDs, no INTs) and is probably the safest selection.

By Herija Green
This entry was posted on Saturday, October 30th, 2010 at 12:16 pm and is filed under Dear RotoRob, FOOTBALL, Herija Green. You can follow any responses to this entry through the RSS 2.0 feed. You can leave a response, or trackback from your own site.