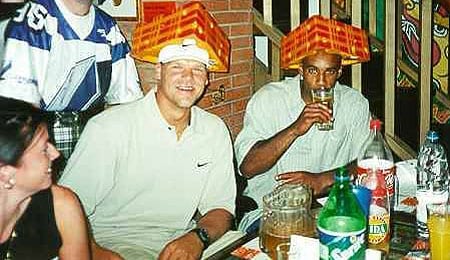 With the Jags hurting at QB, Todd Bouman (centre) took a break from quaffing beer and wearing a block of cheese on his to appear in his first game in five years.

Trevor is taking another break from the NFL Power Rankings this week (something about having to get an education…sheesh!), so your trusty editor will check in with some NFL news and notes to feed your football cravings.

Roddy White was absolutely ridiculous on Sunday, pulling in 11 passes for 201 yards and two TDs to help Atlanta stay undefeated at home and put Cincinnati in some trouble. The fact that he put up such a big day against a pretty solid, albeit shorthanded pass defense in Cincy makes it all the more remarkable. This weekend, however, White will face an even stiffer test against Tampa Bay’s third-ranked pass defense. Expect him to come down to earth, but White has been an absolute beast all season long, and even a middling day for him is still pretty useful for Fantasy owners. Thanks to White’s exploits, QB Matt Ryan enjoyed his biggest day of the season so far.

Do you think DeAngelo Hall bought Jay Cutler dinner Sunday night after he had his way with him, picking off the Bears’ quarterback four times? Speaking of four, that’s the same number of consecutive games that Cutler has struggled. If he hadn’t had those big first two weeks, his numbers would be even worse than last year. But what’s really scary for Cutler owners is that he endured one of his lamest games of the season against the NFL’s worst pass defense in Washington. To make matters worse, Cutler also fumbled on first and goal from the one yard line. D’oh! And next week, he has to travel to Buffalo to face the Bills, owners of one of the best pass defenses in the league. As if going to Buffalo for any reason isn’t bad enough, imagine having to head there knowing you’re going to struggle to generate an air attack? Cutler is winding up on some waiver wires in shallow leagues, and it’s a trend that may gain more steam after Week Eight.

If Kenny Britt is still on your league’s waiver wire, you best pick him up pronto, as he won’t be there for long. Seven receptions for 225 yards with three TDs, one of which was an 80-yard play? This dude needs to get in a bar fight every week. He faces a much tougher task this weekend in San Diego against the NFL’s second-best pass defense, but make no mistake – Britt has arrived as a legitimate offensive force.

Todd Bouman, in his first game action since 2005, wasn’t horrible, but he still hasn’t earned a win as a starting quarterback since 2001. At any rate, don’t get used to it. Jacksonville is expecting David Garrard and Trent Edwards to be healthy this weekend, so Bouman can go back to doing what he does best – holding a clipboard.

Okay, he needs to do a better job of holding on to the ball, but generally speaking could Ben Roethlisberger’s return from suspension be going any better? He enjoyed a very big day Sunday against a very strong pass defense in Miami. He’s got another tough challenge coming up in New Orleans this weekend, but if you slept on Big Ben and didn’t scoop him off the wire when you had the chance, that ship has sailed.

Boy, is Drew Brees ever finding out how tough it is to remain on top. After enjoying a career year last season and leading the Saints to a Super Bowl title, he’s slipped quite a bit this season, perhaps hitting rock bottom Sunday as he endured his worst game of the year in an embarrassing upset loss to the Browns. Brees was picked four times, two of which resulted in touchdowns by David Bowens. Surely you were expecting a better performance against one of the league’s worst pass defenses. Things get tougher this week with Pittsburgh coming to town, and the fact that New Orleans’ running game is racked with injuries won’t make life any easier for Brees.

The Bucs are hardly an offensive powerhouse, but place kicker Conner Barth is gaining steam as a Fantasy option. On Sunday, he booted four field goals, including one from 53 yards, and is now 10-for-12 for the season and just 16 points behind his entire season total from last year. Barth could be in line for another big game this weekend in Arizona against the Cardinals’ middling defense.

Speaking of guys that deserve waiver wire traction this week, how about Jacksonville WR David Gettis? He’s been plodding along this season, but on Sunday exploded for eight receptions for 125 yards. With the Jags playing in St. Louis this weekend, Gettis could be in line for another big game, so if you need help at WR, he’s a great gamble and is almost certainly available on your wire.

Baltimore’s defense hasn’t been up to snuff this season, but don’t fault Ray Lewis. He was dominant Sunday, recording 15 tackles, one sack, one (very key) forced fumble and one PD. Lewis has been winding up on some wires, and I really don’t understand why as he’s already reached 60 tackles, and should surpass last season’s total if he stays healthy. Even at 35, he’s a game changer.

Back to another placekicker that deserves your attention, how about Olindo Mare of the surprising Seahawks? He enjoyed a breakthrough game Sunday, going 5-for-5 on field goals to run his total to 30 straight makes, the longest current streak in the NFL. Seattle’s weak offense ensures that Mare’s upside is limited, but if you’re in need of a kicker in a deeper league, he deserves a look.

By RotoRob
This entry was posted on Wednesday, October 27th, 2010 at 11:41 am and is filed under Fantasy Notes, FOOTBALL, RotoRob. You can follow any responses to this entry through the RSS 2.0 feed. You can leave a response, or trackback from your own site.