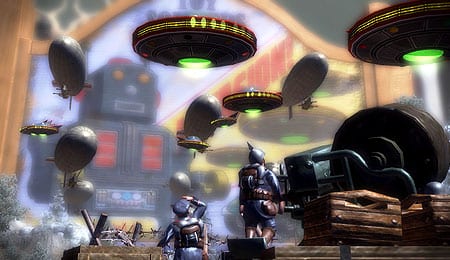 UFOs fill the sky in Invasion as the spectre of Robobob looms large.

Toy Soldiers was a surprise hit on Xbox Live Arcade, melding tower defense with hands-on shooting to create one of the most enjoyable downloadable releases this year. For those that can’t get enough of plastic toys battling it out, Signal Studios returns one more time with Invasion, its second (and final) installment of DLC.

Released on September 29 at a cost of 400 MS Points, Invasion contains:

After sticking to World War I for its source material to this point, Signal Studios goes in another direction with Invasion by introducing more playful units. The basic story is that the British are desperate, and they’re launching an all-out offensive against the Germans (that’s you) with the aid of non-military (fire trucks) and futuristic (flying saucers, space tanks and more) toys.

The diversity of the units you’ll be facing, which includes ones from the main game, makes for some of Toy Soldiers’ most enjoyable battles. You’re constantly scrambling to repair and upgrade existing armaments or tear down obsolete ones as the treacherous Brits rapidly deploy units by air and land.

Despite its brevity, the Invasion scenario may rate as the most challenging in the game, particularly on the higher difficultly settings where funds can be scarce. It also feels like you’re being encouraged to take a more active role as I ended up spending a lot of time operating the various vehicles to keep enemy forces at bay.

Fans of Survival mode will also find a new location to defend. It’s more similar to a campaign map than the others, but with just seven available locations to build defenses and enemies attacking from five positions it’ll push your multi-tasking skills to the breaking point in short order.

Two multiplayer maps (Guise and Mont St. Quentin) round out the package, offering more locations to duke it out with friends locally or over Xbox Live. The two issues that have plagued the multiplayer (lag and overpowered tanks) persist, but the locations themselves are well constructed. Guise is small and built for up close and personal combat with a key central bridge point overlooking both sides. Mont St. Quentin bends to cut down initial lines of sight, allowing more time to construct defenses.

All the things that made Toy Soldiers fun when it launched back in March return in Invasion. Given its low asking price there’s no reason anyone looking to extend their time with the game shouldn’t pick it up.

By Herija Green
This entry was posted on Tuesday, October 26th, 2010 at 9:17 pm and is filed under Herija Green, Video Game Reviews. You can follow any responses to this entry through the RSS 2.0 feed. You can skip to the end and leave a response. Pinging is currently not allowed.