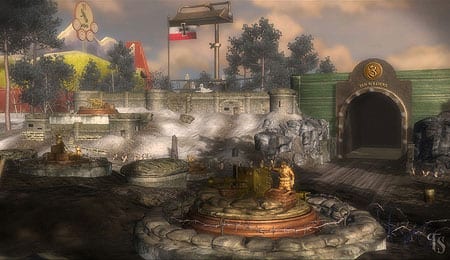 The Xbox Live Arcade has undergone quite a transformation since its inception, going from a service that offered mostly ported arcade games to what is now a steady pipeline of original titles — some of which have to be considered on par with full retail releases. The recently released Toy Soldiers kicks off of this month’s XBLA Block Party, and is an intriguing hybrid action/tower defense game grounded in the technology and weaponry of World War I.

It’s always tricky business getting a real-time strategy game to function well on a console, but Toy Soldiers generally does a good job. When setting up your units you use the analog sticks to move the camera and cursor around the map before bringing up a radial menu of available units with the right trigger. After selecting one you purchase and place it by pressing A.

Once purchased you can interact with the individual units (upgrades and repairs are available), but what makes this game different from your average strategy affair is that you can assume control of any unit at any time. Manning the machine gun nests and mortars is a lot of fun, and there are strategic advantages to doing so, such as getting to fire three mortar shells before reloading instead of one.

In addition to the purchasable units, you’ll also find airplanes, tanks and an interactive sniper tower that allows you to pick off enemy infantry. The controls are kept simple when in the vehicles with little outside of moving and primary/secondary fire to be found. Flying can be a bit clunky and tanks feel like they move a glacial pace when trying to reach combat, but there’s nothing here that sucks the fun out of controlling the units.

For a downloadable release, Toy Soldiers features some really strong graphics that comfortably rank among the better efforts I’ve seen on XBLA. The battlefields, presented as World War I dioramas, are loaded with trenches, barbed wire and destructible cover. There aren’t a lot of vibrant colors, but that makes sense given the source material. Also, despite that drab palette, the game manages to create a quirky and upbeat mood with the way units look and move — watching enemy infantry march into your toy box is always good a laugh…or at least it would be if it weren’t costing you the game.

Even though the screen is consistently populated with upwards of 50 advancing units to go along with hails of gun and mortar fire there’s never any slowing or dipping in the frame rate. Destroying your plastic adversaries is also a highly satisfying experience, one that doesn’t lose its charm no matter how many of the little buggers you blow apart.

The audio holds up its side of things as well, highlighted by some immersive sound effects during the combat itself. Everything from battle cries to gun fire is beautifully reproduced without compromising the game’s relatively light-hearted vibe, which deserves major kudos. There are also fun WWI-era tunes worked into the mix along with some pulse-pounding boss music.

Every mission you embark upon in Toy Soldiers ultimately has the same goal: keep the enemy out of your toy box. That’s easier said than done as the computer will put near constant pressure on you by launching wave after wave of attackers. You have access to six unit types, each of which is designed to counteract different types of enemies — anti-air batteries are necessary to fend off incoming airplanes and chemical nests can stop advancing soldiers in their tracks, but neither of them is effective against armoured ground units. That means you’ll need to keep an eye on the enemy queue to know what’s coming next or you’ll risk being overrun.

What separates Toy Soldiers from so many other strategy/tower defense games is the ability to get your hands dirty by controlling any unit you’ve constructed, adding more than a little action to the mix. The A.I. does an effective job of defending your position, particularly controlling the AA guns, but when you filter enemy forces into choke points, it’s always best to be handling the key weaponry yourself. The balancing act of going between building/repairing new units and taking care of business personally is easily the game’s most addictive element.

The game offers two different 12-mission campaigns. You start off guiding the Allies and as you move through the campaign you’ll unlock more unit types as well as additional upgrades. Ultimately you’ll have access to the six types mentioned above, five of which can be upgraded to Level 3 — you cannot improve the basic barbed wire. It does feel a little short on variety, though the game is judicious in unlocking the ability to upgrade units, which makes it seem like more.

Upon completion you’ll unlock a second campaign where you play as the Central Powers. It’s worth noting that both campaigns contain the identical 12 maps with the same bosses found on the same levels, although some missions now take place at night. Despite the familiarity, switching sides is plenty to make it feel like a different experience and you’ll definitely want to play through both versions.

Toy Soldiers begins with three difficulty levels, but each time you finish a level you’re given the ability to play through it on Elite difficulty. Here the friendly A.I. will not fire a single shot, leaving you to try to ward off the entire assault solo. I personally can’t fathom clearing most of the levels on my own, so anyone looking for a challenge will find it here.

There’s online and offline competitive multiplayer (no co-op) as well, which adds launching attack waves at your opponent to go along with the defensive abilities. It’s well balanced, though the tanks feel a bit overpowered, and can make for a lot of fun. Finishing the campaign also unlocks a survival mode where wave after wave assaults your position until your toy box is destroyed.

Toy Soldiers is a charming game that’s rich in both strategy and action. It packs a lot of content for its asking price (1,200 MS Points – $15) and should satisfy both cerebral and action-hungry gamers.