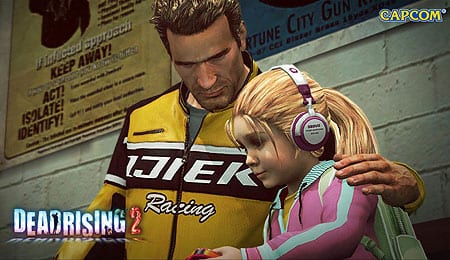 Dead Rising 2’s plot is driven by Chuck’s love for his zombie-afflicted daughter Katey. Which makes it one of the worst parts of the game.

It’s fun to kill zombies. Whether you have the trusty old chainsaw, a spiked baseball bat, or a football with grenades duct-taped to it, there’s nothing quite like taking apart the living dead — especially when there are endless hoards coming your way and everything around you can be a weapon. That’s the starting point for Dead Rising 2. Unfortunately, the game loses some of its steam through technical issues and frustrating design choices, preventing it from really becoming a classic.

For a high-profile PS3/Xbox 360 game, Dead Rising 2 certainly doesn’t match the other graphical powerhouses of this generation. In cutscenes, models are adequate, but they’re nothing special during actual gameplay. In some cases, the game doesn’t look as good as, say, the recently upconverted God of War PS2 games. While I haven’t come across any particular reason for this, it makes sense that a lot of the system’s processing power is used in creating, moving, and tracking the hundreds of zombies in the large space around you. Because of that, you’re going with horsepower over aesthetics, and that means that Dead Rising 2 won’t exactly be the centre of your tech demo library.

As you’re in Fortune City (basically, Las Vegas), the backgrounds and environments are all what you expect. There are bright, garish colours, some with animated lights and flashing messages. Hey, it’s Vegas…err…Fortune City, right? The colourful designs and obnoxious backgrounds match the situation perfectly, and even though these might not be the most detailed environments we’ve seen in recent gaming, there will still be no question about where you are.

Dead Rising 2’s soundtrack essentially comes in three parts: Blockbuster Action Movie Music for cutscenes and intense moments, Bang-Your-Head Metal (or pro wrestler theme music) when Chuck is doing badass stuff like making weapons, and Mall Muzac, complete with cheesy baselines and quiet flutes. Funny enough, the last option is probably the thing that will get stuck in your head the most. It’s this mix of extremes that also represent the sense of humour you’ll find throughout the game.

The sound effects are probably more important to Dead Rising 2 than the voice acting, since the heart of the game is really about using umpteen weapon and weapon combinations to kill zombies. From action-game basics (swords, bats, guns, etc.) to in-the-moment improvisation, Dead Rising 2 has an appropriate sound effect for whatever it is your survival adventure needs. Ever wonder what it’d sound like to whack a zombie upside the head with a purse? Wonder no more.

In a game where you’re being attacked by literally hundreds of NPCs, precise control might just be key to success — and that’s where Dead Rising 2 falters. The game’s collision detection just isn’t that accurate, which means that you’ll be accidentally hitting NPCs that you’re supposed to be escorting or you’ll just plain miss zombies you’re swinging at. Want to jump on that store counter to get away? It might take you a few tries, and watch out for the invisible edges that seem to snag Chuck as he runs around.

As with the graphics, some of the processing power required for precise collision detection was probably used up simply through the sheer number of zombies in each area. However, scaling back on the zombies just by 10 or 20 per cent might have created a more accurate control scheme. As it is right now, you could be standing right in front of a zombie and swinging a sledgehammer that somehow completely misses it. And when you get guns, well, Gears of War this ain’t.

Capcom has balanced this somewhat by the fact that zombies are ridiculously easy and fun to kill. But during tense moments when you’re down on health and you really, really need to get that bottle of orange juice across the room, this lack of precision can be overwhelmingly frustrating. The game could also benefit from a quick dodge or side tumble move, as Chuck simply isn’t nimble enough to avoid the attacks of some mini-bosses.

I’ve been pretty critical about the technical aspects of Dead Rising 2, but the bottom line is that the core of the game is fun, fun, fun. It’s a simple formula — get stuff, combine it into cool weapons, kill lots and lots of zombies. When you get your first taste of zombie killing beneath the Fortune City arena, you’ll laugh and maybe even cringe a little bit, but you’ll definitely have fun. You’ll also be able to dress Chuck up in a lot of the stuff you find, from a bikini to Halloween costumes — and don’t forget to mix and match. Maintenance rooms are littered throughout Fortune City, and these work benches are where you’ll combine weapons into new maniacal concoctions (my personal favourite is the spiked gloves created from MMA gloves and a box of nails). You’ll be able to pick up just about anything you run into, and it’ll serve some functional purpose. New weapon combinations are unlocked through simple experimentation, leveling up, or closely examining posters and items around Fortune City.

That’s the gist of how the game works. From there, however, it’s a mixed bag that will definitely turn some people off. These issues stem mainly from design decisions, not technical issues, so you’re pretty much stuck with the game as it is.

As with the first Dead Rising, the game is broken up into segments and each segment has a timer. During each segment, you’ll also get optional side missions which will take you all over Fortune City. Sometimes you’ll discover new weapons, sometimes you’ll rescue people and they’ll join your party to help, and sometimes you’ll just kill a heck of a lot of zombies. It’s all about exploration and creativity, which is why the timing aspect of the game can be so frustrating. It’s like going to a buffet but only being allowed to pick one thing at a time to bring to your table. This forces you to focus on the core story missions and only some of the side missions — and if you run out of time, there’s no re-starting the mission; your only options are to re-load from your last save point or to start the whole story over.

Ah, yes. That last part is one of the most interesting caveats with Dead Rising 2. You can start the whole story over, but Chuck will be as strong as you last left him. And you’ll probably have to do this, given the trial-and-error nature of some missions coupled with the timer. It’s old-school in a way, just like the old NES games that forced you to start over when you died — except this time, you can re-start the story with a super-leveled-up Chuck capable of doing way more damage with a more unique assortment of weapons and more inventory slots. This will allow you to catch up on other side missions that you just couldn’t do, or give you some level of freedom that you couldn’t get through your first playthrough.

One way to level up without the need to focus on story missions is by joining in a co-op game. You’ll send an invite out to players (public or private depending on your settings) and if they accept, you’ll be teleported to their world. You’ll get to keep all of the cash, experience, and weapons but it won’t affect your story progress. And yes, killing zombies with two people is more than going solo. Co-op is only online, though. Considering how fun zombie killing is with a friend in the room, the lack of local co-op is very disappointing.

As for the story, well there’s a bit about a zombie-bit daughter and a conspiracy to let zombies loose. It didn’t grab me at all, and much of the time, it really seemed far too serious considering the goofy Evil Dead-vibe of the game. One cool thing, though, is that Chuck will wear whatever you have in cutscenes. So he might have an emotional moment with his young daughter while wearing a bikini top, biker boots, and an old lady’s church hat. That’s always good for a laugh.

Dead Rising 2 won’t be everyone’s cup of tea. The unique time/leveling up structure of the game creates nearly unlimited replayability, especially since side missions can branch off and spawn different experiences that you wouldn’t get without them. It’s a double-edged sword, though; some people will hate the timing aspect of it despite the workaround that Capcom implemented. On the other hand, the co-op and creation aspect will keep a lot of players coming back for more. The simple solution would have been a non-story-driven open-world option where you just run around, make weapons, and kill zombies. If Capcom included that, along with local co-op, I might give Dead Rising 2 a 4.5. Instead, these gameplay limitations, coupled with technical issues, prevent it from being a classic.

Are you following our Video game only Twitter feed?

By Mike Chen
This entry was posted on Monday, October 25th, 2010 at 3:17 pm and is filed under Mike Chen, Video Game Reviews. You can follow any responses to this entry through the RSS 2.0 feed. You can skip to the end and leave a response. Pinging is currently not allowed.