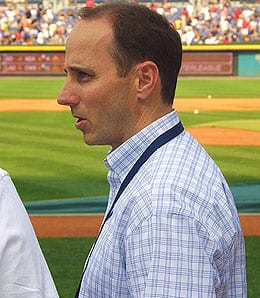 Brian Cashman has helped build a team that’s made it to the ALCS nine of the last 15 years.

Joe Girardi continues to claim that it wasn’t the Yankees’ strategy to take the AL Wild Card instead of the AL East so they could avoid facing Texas in the first round. But with him team squared at one with the Rangers – and really very lucky not to be down 2-0 – and scheduled to face Cliff Lee in Game Three, it’s pretty obvious that strategically planned or not, New York was wise to miss Texas in the ALDS.

Speaking of Lee, he further cemented his reputation as a playoff ace with a pair of dominating wins in Tampa Bay to help the Rangers knock out the Rays in the ALDS. Just look at how he turned things around for Texas after missing a couple of weeks at the beginning of September. The Rangers had been scuffling in August and dropped five straight in early September, but Lee’s return stabilized the club to the point that they entered the postseason firing on all cylinders. Lee went 2-1 with a 1.93 ERA and .189 BAA in September, striking out 24 and walking just six in four starts and 28 IP. And he’s taken that to a new level since the playoffs have begun.

What the Yankees need to take control of this series is Alex Rodriguez to return to his 2009 playoff form, as opposed to pretty much every other trip he’s had to the postseason. He’s just 2-for-10 so far in the ALCS, though in fairness, he drove in a pair of runs to help the Yanks prevail in Game One. New York has proved it can win without A-Rod, getting very hot at the end of August and beginning of September while he was on the DL. And clearly he was not needed in the sweep of the Twins, as Rodriguez did next to nothing, yet the Yanks ploughed through Minnesota with ease. But just imagine how potent New York will be if he gets hot. Lee or no Lee, the Brian Cashman’s club will be heading back to the World Series if Rodriguez turns it on.

Another reason to hate the Yankees: this is their ninth trip to the ALCS in the last 15 years. Just think about that for a moment. Okay…now go throw up.

Phil Hughes experienced a massive hike in innings pitched this season, and as we expected he was capped at just over 175 IP for the year. However, any worries that he was tiring down the stretch (Hughes gave up six homers in just 26 IP in September) had to be alleviated when he hurled seven shutout frames in Game Three of the ALDS as the Yanks wrapped up their sweep over Minnesota. Hughes’s control in that start was sharp and he only had to throw 99 pages. Better yet, he had a complete week of rest before starting Game Two of the ALCS Saturday afternoon.

Well, it didn’t work out so well, as Hughes again had command issues, and served up another dinger en route to being tattooed for ten hits and seven runs in just four innings, and he simply didn’t give him team a chance to win. And suddenly, the Yankees’ already tenuous pitching situation just got a bit more worrisome. Hughes is scheduled to pitch again in Game Six (if necessary) on Friday in Texas. It’s likely New York’s season could be on the line in that game, and I’d be worried about the kid’s ability to get the job done in such a key situation.

Game Three on Monday night will pit Lee against Andy Pettitte, who is also no stranger to playoff glory. In fact, the veteran Yankee southpaw will be seeking his 20th career post-season victory – more than any other pitcher in MLB history. Pettitte looked solid in beating the Twins in Game Two of the ALDS and will be pitching on 11 days rest, so rust more than rest will be a concern. This game has all the makings of a classic, as not only is it a swing game, but it pits two of the best left-handed pitchers in post-season history against each other. Make sure you clear your schedule for this one, folks.

Elvis Andrus may not have had the sophomore season we were expecting, but he’s making up for it in the playoffs, having hit safely in all seven games. Saturday, he went 2-for-4 with a run, a walk and two steals for his fourth multi-hit game of the postseason. Better yet, with five steals, he’s anchoring a Ranger running game that is finally producing like it was expected to this season. After his down season, Andrus may slide in your draft next spring, which will make him a very nice value pick given his upside.

One of the Rangers’ speediest players is of course Julio Borbon, but his chief weapon has been difficult to exercise from the bench, as when he struggled during the season, Texas shifted Josh Hamilton to centre and slotted David Murphy into the lineup in Borbon’s place. Borbon got the start in Game Two of the ALDS, and he did score a run, but took an 0-for-4 with two strikeouts, and has been pretty much riding the pine since, seeing only three at-bats in the five subsequent games. Borbon came up big in September when Hamilton was out, batting .341 with 11 runs, 14 RBI and five steals, but overall he couldn’t come close to delivering on the promise he showed as a rookie. In fact, after stealing 19 bases in just 46 games last year – and making Fantasy owners drool over his SB potential – he swiped just 15 bags in 137 games this year. Exhibit A as to why Texas’ running game fell way short of expectations in 2010.

By RotoRob
This entry was posted on Sunday, October 17th, 2010 at 4:10 pm and is filed under BASEBALL, Fantasy Notes, RotoRob. You can follow any responses to this entry through the RSS 2.0 feed. You can skip to the end and leave a response. Pinging is currently not allowed.