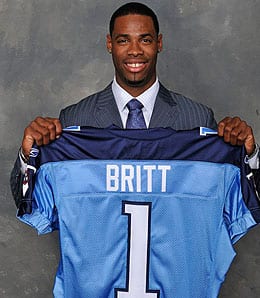 Kenny Britt is starting — and scoring — making him an excellent flex choice.

Entering Week Six, I’m wondering which of Kenny Britt, Danny Amendola, BenJarvus Green-Ellis or Ladell Betts (assuming Pierre Thomas sits) I should use in my two flex spots. Note that we get one point per two receptions.

On paper I like Betts’s matchup (Tampa is allowing a whopping 4.9 YPC, 31st in the NFL), but he was responsible for two disastrous plays last week and you have to wonder if there will be a hangover, or a tightened leash. Green-Ellis is running hard and might be more of a focal point sans Randy Moss, so I’d go with him for one of your FLEX spots.

For the other, I don’t really think there’s much of an argument for Amendola. Catching 12 passes in a 38-point loss means next to nothing, and the fact that he hasn’t scored all season while Britt has scored in three straight makes Britt the smarter play.

Fantasy football is all about maximizing potential, and that being the case you should roll with Green-Ellis and Britt.

By Herija Green
This entry was posted on Saturday, October 16th, 2010 at 12:23 pm and is filed under Dear RotoRob, FOOTBALL, Herija Green. You can follow any responses to this entry through the RSS 2.0 feed. You can leave a response, or trackback from your own site.