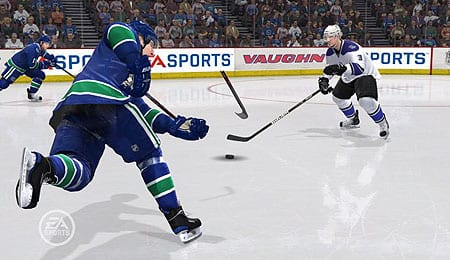 Jack Johnson is such a bad ass he can break sticks with his mind.

If you purchased a hockey card between 2005 and 2007 the chances are pretty good that the info on the back was written by me. For nearly two years, I served as the Hockey Editor for Upper Deck — before all that counterfeiting and defrauding of vendors — and during that time I rediscovered my forgotten love of hockey games that dates back to Ice Hockey on the NES.

Within that genre, Electronic Arts’ NHL series has become a powerhouse, dominating the competition so completely that 2k took this year off to reboot its own franchise. Given the chance to run unopposed, did NHL 11 mail it in or keep pushing the envelope?

Few sports games on the market handle as intuitively as NHL 11, which continues to use the dual analog stick setup for skating, puck handling and shooting. It works beautifully, and even the more advanced moves are simple to pull off. Board work has been tweaked for more realistic results, but the biggest change is a reworked face off system that allows for multiple outcomes, adding more strategy and depth. Also new is a “hustle” function, which acts like a de facto turbo button yet prevents spamming by making your player fatigue dramatically when you overuse it.

There hasn’t been much graphical advancement in the series over the past two years as NHL 11 looks nearly identical to NHL 09. In fact, the only substantive differences come as a result of the brand new real time physics engine, which creates a more authentic flow to the action. Gone is the pre-canned “big hit” animations, replaced with realistic collisions based on things like momentum and player size. The puck also deflects off different surfaces with added realism.

As noted, player models and arenas look pretty much the same, which is fine as everything looks so smooth and natural gliding across the ice you won’t care. What might frustrate is the occasional bouts of slowing that occur when pucks start flying and skaters are scrumming it up along the boards. The camera angles in Be A Pro mode can also be annoying when they rotate around you rather than just staying locked. They’re small gripes, but they’re not unique to this year’s version, either.

Two years ago I thought Bill Clement and Gary Thorne were the best announcing duo I’d ever heard in a video game. However, with much of their commentary identical to NHL 09, that torch has now been passed to the NBA 2k crew. They still do a nice job of calling the action on the ice and matching the excitement level with their tone, but it feels a little too familiar. The soundtrack is appropriate and few sounds are more terrifying than the clang of the crossbar in overtime when you’re on “D.”

If you’ve played EA’s NHL series since the dual-analog stick reboot then you pretty much know what to expect in terms of on-ice action as the nuts and bolts haven’t changed much. Then again, if it wasn’t broke, why fix it? Instead of changing things just so it can be stamped on the box, NHL 11 continues to add new elements and improve existing ones to subtly, yet substantially, up the ante.

Most of the key additions have already been touched on, but they’re worth revisiting, particularly the real time physics. The way it drives the action really helps keep things seeming fresh and ensures that you’ll be seeing something new 50, 100 or even 500 games later — a key component for any sports game fundamentally presenting the same event over and over again. You’ll see crazy deflections, skates kick pucks into the net, goals disallowed and more.

Some of the more unrealistic tactics, such as opponents constantly diving on the ice defensively, have been cleaned up as you can now jump over them as an extension of the deke system. The additions of the new face off engine as well as broken sticks, which admittedly happen too often, are nice little improvements as well. Casual fans may not appreciate all the nuances that continue to get addressed by EA, but true puck fans should take note.

One area where I feel the game is beginning to show its age is in the presentation. There are a lot of stoppages in play during an average game, and I felt I was seeing the same handful of goalie animations over and over again at the expense of replays. The post-whistle scrum can also be ridiculous at times, looking like something out of Slapshot with all ten players paired off and shoving each other. Those seconds add up, and when you’re playing your fourth or fifth game in a row you’ll wish the action would just move ahead to the next face off.

Ultimately, though, all of my gripes are minor ones dealing with elements peripheral to the in-game experience itself. The more deliberate flow and sense of speed are excellent, as are goalie and skater A.I., though you’ll still see the occasional bad play by a defenseman allowing a breakaway chance that should’ve never materialized. Overall, the on-ice action is excellent.

Electronic Arts is clearly making a play to monopolize your gaming hours this winter as NHL 11 is loaded for bear with three and a half (Be A Pro and EASHL are offline/online versions of the same thing) fully fleshed out game modes to choose from. The newcomer is the card-based Hockey Ultimate Team (HUT), which allows gamers to create their team from scratch and be part of an Online Dynasty mode without the pressures of joining a dedicated league with other owners.

You begin with a starter pack that contains low-level players and are tasked with building up your club by earning EA Pucks — done by playing games with your HUT or buying them with MS Points — to purchase additional packs. These bring not only new talent, but also things like training (play them to improve a player’s skill level), contract (to lock up your guys) and head coach cards. The game boasts that there are over 4,100 player cards available so obviously there’s a ton of depth here.

Each player/goalie card contains a lot of information, including skill ratings, how many games they’ve got left on their contract (and in their career), available training card slots, potential and more. As you progress you’ll trade/sell players and tweak your roster in an effort to maximize team chemistry. It can be a lot to digest and relative novices may be turned off by the amount of micro managing and lack of household names available early on. While it may not be for everyone, it has a lot of potential for those willing to invest the time and navigate the clunky menus. It’s not perfect, but it’s definitely an improvement over the Ultimate Team modes we’ve seen from other EA Sports titles.

For those that prefer a more singular experience, there is Be A Pro and its online cousin, the EA Sports Hockey League (EASHL). Both have received some minor tweaks — you now begin your offline career in the final stages of the Memorial Cup, and your performance there drives your draft position — yet carry the same strengths and weaknesses. The CPU is a little more forgiving with your player now and won’t drop you from the first line on a whim, but it’s still incredibly harsh when it comes to grading your team play. On my first shift I poke checked the puck away from a defender lining up a shot and then took it the length of the ice, deked and went top shelf for a goal. My team grade…a B-minus. What!?

The EASHL has made itself a bit more accessible to newcomers by having players start as free agents, allowing them to hone their skills and not join a team immediately. Still, the EASHL is driven by the people you’re playing with, and that means you’ll potentially be subjected to terrible teammates or opponents that will quit at the first sign of trouble. When it’s right, though, it’s brilliant and still rates as my favourite online sports experience.

Last up is NHL 11’s franchise mode, entitled Be A GM. Like Be A Pro, there haven’t been huge changes made here. The biggest would be the addition of the Canadian Hockey League as well as several European Leagues, allowing you to select real prospects in the expanded draft. Restricted free agency is also new, and the game’s detailed use of the CBA to hand out compensation when you raid another team’s RFAs makes you think twice before offering that deal.

However, despite some above-average trading A.I. there are issues that will frustrate would-be GMs looking for an authentic recreation. First, every team is rated within a few points of each other so there’s virtually no separation between taking over as Pittsburgh’s head man or Florida’s. Second, the numbers produced by simulating a season are simply out of whack. Injuries are far too rare, as are penalties — it’s like suddenly everyone in the NHL is angling to win the Lady Byng Trophy — and no one ever gets fatigued. It’s unrealistic and hurts the mode’s authenticity.

Running unopposed, NHL 11 could’ve gotten away with releasing a glorified roster update. Instead, it trotted out a massively deep new mode and reworked the in-game physics to improve on what was already a superb recreation of the sport. If you like hockey in the slightest this is a great pick up, and one that’ll be dominating your free time for months to come.

By Herija Green
This entry was posted on Tuesday, October 12th, 2010 at 1:32 pm and is filed under Herija Green, HOCKEY, Video Game Reviews. You can follow any responses to this entry through the RSS 2.0 feed. You can leave a response, or trackback from your own site.