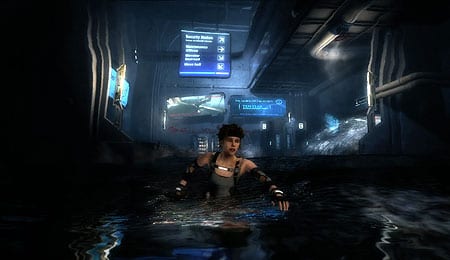 Hydrophobia oozes desperation thanks to some very dark visuals.

It’s been just over a month since Xbox Live’s Summer of Arcade wrapped up its proceedings, but Microsoft is back at it again with another four-pack of games under the title Game Feast. It kicks off Wednesday with the anticipated release of Hydrophobia. Xbox Live has traditionally done a good job of identifying the best and the brightest downloadable releases for these promotions, but is its latest offering up to snuff? Read on to find out.

Although the basic platforming and shooting in Hydrophobia is solid there are a handful of choices that stand out as head scratchers. The most notable is the complete abandonment of the left bumper/trigger during the main game. Instead of using them to aim down sight — as is typical in many shooters — you’ll instead click on the right stick to enter/exit precision aiming. It feels counterintuitive and slow. Also strange is the inability to enter cover without having your weapon drawn.

The recent trend of graphical excellence in downloadable titles continues here as developer Dark Energy Digital has crafted a gritty futuristic setting in the same vein as Dead Space, though the environments aren’t nearly as diverse or creepy. The game projects a sense of claustrophobia, making it feel like your options for escape are dwindling by the moment. Character models are decent despite the fact your enemies are recycled and have no real personality.

Realistic water physics have been a major talking point of Hydrophobia, and for the most part they hold up well with waves ebbing and flowing as the hull continues to breach. By the same token, however, the constant presence of water makes it difficult to see at times, particularly when the water forces you partially underwater. In these instances the game doesn’t seem sure whether to give you the above or below water perspective, creating some choppy moments.

Probably the game’s weakest element is the voice acting, which features a passable female lead and an engineer named Scoot, who does a painfully stereotypical Scottish accent that’ll have Star Trek fans rolling their eyes at the obvious similarities between him and Mr. Scott. It didn’t kill the experience for me or anything that severe, but I believe others will take larger issue with it than I did. The soundtrack does a nice job of matching the tenor of events, and the sound effects follow suit.

Set in what the developers have described as a “tangible future,” Hydrophobia takes place aboard a massive ship called The Queen of the World, which is essentially a city at sea that the world’s rich inhabit to escape the epidemic of an overcrowded planet. With resources scarce, NanoCell, one of the ship’s primary backers, is set to make a huge announcement against the backdrop of the floating metropolis’ 10th anniversary celebration. However, a group of terrorists have other ideas.

You play as Kate Wilson, an engineer caught in the wrong place at the wrong time. Kate is heading down to the lower levels to check on a system outage when all hell breaks loose, sending her into survival mode as she tries to escape the ship’s flooding innards while also unraveling the motives of the Malthusians that are hijacking the vessel. Their message to the masses: Save the World, Kill Yourself.

Gameplay in Hydrophobia has a little bit of everything: platforming, exploration and combat. This definitely isn’t a shooter, however, so those expecting lots of gunplay may be disappointed as much of Episode 1 — for those that aren’t familiar, Hydrophobia is an episodic three-part release with only the first portion being presented here — has you trying to find your way out of the lower decks by locating keycards and ciphers to decrypt the doors preventing your advancement.

Plus, what the game lacks in firefights it makes up for with a somewhat unique approach to combat, which rewards you based on how creatively you deal with the Malthusians. Armed with only a pistol (and non-lethal sonic rounds for much of the time), Kate’s options may seem limited at first. However, as you progress and become more comfortable with the combat system you’ll find yourself looking for inventive ways to kill your enemies.

Sure, you can simply fire fully charged sonic rounds into a baddie until he expires, but it’s much more fun to sever a live wire and watch him fry…or shoot a breach point to unleash a torrent of water, drowning your adversary…or maybe send an oil barrel rolling with some uncharged rounds and then detonating it once it reaches a terrorist’s cover point. The better your combos the more points you’ll rack up. Those are then added to your tallies for finding objects and documents to give you an overall score, which is posted on the game’s online leaderboards.

Once you’ve finished the game you will unlock the Challenge Room, which grants Kate the ability to manipulate water itself as you try to fend off five increasingly difficult waves of enemies. Once again you’re looking to rack up the points by killing with pizzazz to post the best score. It’s not too difficult, especially since you’re given the high ground while your enemies are stuck in the water below with no way to reach your level, but it’s a nice change of pace to feel more powerful than your foes, something you’re not during the main game.

While Hydrophobia is generally fun, it is not without faults. A couple of odd decisions regarding the controls (outlined above) combined with a difficult to navigate map make some things more of a chore than they should be. It’s also a relatively short experience — around five hours — and when the credits abruptly roll you’re left with more questions than answers. The developers are counting on gamers playing through multiple times searching for hidden collectibles and improving their high scores, but not everyone is wired that way, and those that aren’t may find it a bit light on content.

While not as strong as Toy Soldiers or Limbo, the titles that kicked off Microsoft’s first two XBLA promotions this year, Hydrophobia is worth experiencing. There are some issues I’d like to see cleaned up before the release of Episode 2, but the fact that I’m looking forward to the next installment is an endorsement in and of itself.

By Herija Green
This entry was posted on Thursday, September 30th, 2010 at 12:11 pm and is filed under Herija Green, Video Game Reviews. You can follow any responses to this entry through the RSS 2.0 feed. You can skip to the end and leave a response. Pinging is currently not allowed.