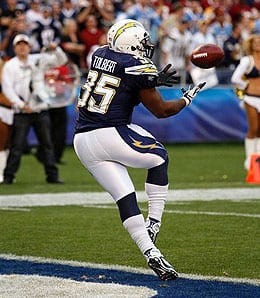 If you were lucky enough to nab Mike Tolbert off the wire, you need to use him.

Drew Brees for Matt Forte, what do you think of this trade offer? The guy with Brees has extra QBs and needs help at running back, and pretty much vice versa for me. Thanks for looking at it.

It’s hard to get a complete picture without knowing who else you have at running back as well as who your current QB(s) is/are. Scoring system could also play a factor. Assuming you can absorb the hit at RB, though, I’d say go for it. The Bears can’t run block to save their lives — 27 carries, 79 yards in two games — and teams are going to get wise to Forte. In fact, take out that 89-yard score and he’s got 11 catches for 99 yards in two weeks, not earth shattering. Conversely, Brees is a 4,400-yard, 30-touchdown lock, even with Reggie Bush sidelined.

Our waiver wire picks just hit…I didn’t use a WW pick so I stayed up tonight until the WW selections were processed in our league and I grabbed Mike Tolbert as a FA pick up. Now I have a dilemma…Tolbert or Jacoby Jones for my flex spot? We get one point per two receptions.

Also…would you keep Danny Amendola or grab Legedu Naanee or Mike Williams (SEA) for a fourth WR? I have Sam Bradford who will start for me in Week Four due to Tony Romo’s bye, so that’s why I have kept Amendola so long…the Rams play Seattle at home in Week Four.

I think Tolbert is the better option as your flex. He has more upside. It’s hard to imagine the Chargers pushing Ryan Mathews in a very winnable game against the Seahawks. I think you could see 12-to-18 carries from Tolbert this Sunday, and he’s a hard runner.

To me, Amendola is a JAG. You don’t win in the NFL throwing 40 times per game — ask both your Fantasy QBs, who rank first and fourth in attempts and have a combined record of 0-4 — and I can’t believe the Rams are going to keep passing this much. That’s how you get your young franchise QB killed. The jury is still out on both Williams and Naanee, but San Diego’s passing attack is legit, something you can’t say for Seattle or St. Louis. Naanee has more potential in that offense than the other two at this point.

By Herija Green
This entry was posted on Saturday, September 25th, 2010 at 1:28 pm and is filed under Dear RotoRob, FOOTBALL, Herija Green. You can follow any responses to this entry through the RSS 2.0 feed. You can leave a response, or trackback from your own site.