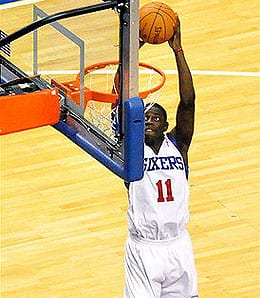 Jrue Holiday will be running the Sixer offense this season.

Unlike the Commonwealth Games, the 2010-11 RotoRob NBA Draft Kit is something you can count on, as there’s barely any corruption going on here. Barely. So while you worry about an NBA lockout next season, let’s concentrate instead on this coming season, and offer up our picks for the top 10 sleepers in Fantasy basketball.

Ah, sleepers. We all love ’em, we all want ’em, and everyone has his own idea of how to spot ’em. We tend to favour the time-honoured method of looking for good players who were formerly mired in less-than-ideal circumstances, and now are largely free of those limitations. If we could sum up this list of under-the-radar talents in just one word, that word would be: opportunity. Many of these ten players either have relocated to a more favourable setting, or stand to be the prime beneficiary of their team’s off-season moves.

The term “sleeper” has multiple connotations and myriad definitions, but for our purposes here let’s say that these are the players we think have the best chance to outperform their draft-day value, without the huge downside risk associated with so-called “deep sleepers” or “super sleepers.”

Keep in mind that situations change frequently during training camp, so keep an eye on how pre-season lineups shake out and be prepared to adjust your own sleeper lists accordingly.

1. Andray Blatche, PF/C, Washington Wizards: When the Wizards shipped Brendan Haywood off to Dallas, Blatche stepped into the void created by his former time-share partner and became a bona fide Fantasy stud. The big man averaged 22.1 points, 8.3 boards, 3.6 assists and 1.5 steals in the second half of the season, and there’s no reason to believe that more of the same isn’t in the offing for 2010-11. Blatche doesn’t draw a lot of attention in Washington, but his sound all-around game should be welcome on any Fantasy roster.

2. Jrue Holiday, PG, Philadelphia 76ers: The 20-year-old Holiday looks to have the inside track on the Sixers’ starting point guard slot this season, and all indications are that he could put up some big numbers. The youngster averaged 9.7 points, 4.7 assists and 1.4 steals as a starter last season, but his game improved markedly as the season wore on. After the Break, Holiday bumped his line to 11.9/5.5/1.5 – while averaging 1.2 treys and shooting 49 per cent from the field. Backcourt mates Lou Williams and rookie Evan Turner are more scorers than dishers, so Holiday should pull the bulk of the minutes at the point.

3. Andrea Bargnani, PF/C, Toronto Raptors: The departure of Chris Bosh, who has led the Raptors in scoring and rebounding in each of the last five seasons, kicks the door wide open for Bargnani to become a Fantasy star. The 24-year-old posted career bests in points (17.2), boards (6.2) and blocks (1.4) last season, and could make a strong bid for a 20/8 campaign now that he figures to be the Raps’ top offensive weapon. Oh, by the way, Il Mago also dropped in 121 treys, and he’s an 81 per cent free throw shooter for his career. Bargnani’s propensity to bomb away from downtown drops his field goal percentage below the typical big man levels, but a repeat of that 47 per cent (another career best) he shot from the floor last season would be just fine with his Fantasy owners.

4. Raymond Felton, PG/SG, New York Knicks: Felton quietly (which is the way non-NASCAR-related things happen in Charlotte) averaged 13.3 points and 6.5 dimes during his five-year sentence, errr…career with the ‘Cats. The move to the Big Apple (and an offense so good it made Chris Freaking Duhon Fantasy-relevant) should make Felton a Fantasy staple – and his career average of 1.5 steals is just an extra schmear on the bagel. Don’t look for big three-ball totals from Felton, but he should kick in 60-to-70 treys over the course of the season. What you can expect is 13-to 15 points and 8-to-9 dimes per night in coach Mike D’Antoni’s pinball offense.

5. Kevin Love, PF/C, Minnesota Timberwolves: With Big Al Jefferson now manning the middle in Utah, the stage is set for Love to become the main man in Minnie. Love averaged 14 points and 11 boards in just 29 minutes last year, and should be called upon to assert himself more on the offensive end this season. No one expects Darko Milicic to suddenly become an inside scoring threat any time soon, so the lane pretty much belongs to K-Love. He’ll need to improve his shooting – that 44.6 from the field last year just won’t do – but if he continues to develop his three-ball (35 in just 60 games) and crank out the double-doubles, we’re willing to wait.

6. Blake Griffin, PF, Los Angeles Clippers: Remember him? The No. 1 overall pick in the 2009 draft was named the MVP of the ’09 NBA Summer League, then averaged 13.7 points and 8.1 rebounds in the preseason. Unfortunately, the Clips’ wunderkind suffered a non-displaced stress fracture of his left patella during his last pre-season game – an injury that would eventually end his season. Griffin looks ready and rarin’ to go this season, and has the upside to become a double-double machine. One word of caution: he needs to improve his free-throw shooting (58.9 per cent at Oklahoma) if he hopes to become an elite Fantasy force.

7. Anthony Randolph, PF/C, New York Knicks: Randolph was reckoned to be one of last season’s breakout stars, but a funny thing happened on the way to the coronation. That funny thing was Golden State coach Don Nelson, who can be to Fantasy lineups what Godzilla was to Tokyo. Nellie never committed to allowing Randolph enough court time to refine his prodigious raw talent, and the youngster’s injury-shortened sophomore season was fraught with inconsistency. We saw flashes of brilliance, though: his 28-13-5 line against Orlando and his eight-block night against the Hornets showed what this freakishly athletic kid is capable of. Randolph’s per-36 minute numbers last season were downright scary: 18.5 points, 10.3 boards, 1.3 steals and 2.5 blocks. Be still my heart.

8. Mo Williams, PG, Cleveland Cavaliers: Hmmm…just skimming through the off-season news here, and it seems as though Lebron James now plays for Miami. Wow, that one sure slipped under the radar, huh? With Bron-Bron now gone-gone, there are plenty of stats looking for a Cavalier to call their own, and Williams figures to give quite a few of those wayward numbers a fine home. Williams filled more of a shooting guard role the past two seasons, with James oft employing the drive-and-dish style that typifies the play of a point forward. Those days are gone, though, and Mo-Will should see an increase in both his point and dime totals this season; think 18 and six and you’re in the neighborhood.

9. Hedo Turkoglu, SG/SF, Phoenix Suns: Hedo was no hero in Toronto last season, but at least some of his swoon can be attributed to lack of opportunity and the fact that just when he started to roll, he always seemed to get hurt. He was never a good fit in the Raps’ offense, averaging just 9.1 field goal attempts per game – his lowest total in six seasons. That was then, this is now, and a move to Phoenix’s wide-open offensive scheme (and a spot alongside uber-disher Steve Nash) should help rejuvenate the heretofore-steady vet’s career. Turkoglu’s 2009-10 stinker should depress his draft day value, but a return to 15-to-16 points, five rebounds and close to two treys per outing would not be at all surprising.

10. Gilbert Arenas, PG/SG, Washington Wizards: Before his suspension, Agent Zero was playing a very, ahem, high calibre game – firing away at a 22.3 PPG clip, with 7.2 assists and 1.3 steals to boot. The firearms fiasco that earned Arenas his ouster after just 32 games last season has caused his draft value to plummet, but if he can stay out of trouble, Agent Zero could have a huge season. The Wizards would love for top pick John Wall to take over at point guard, with Arenas sliding over to the two. The veteran would lose a few assists to the rookie, but he should still garner his share of dimes – with his scoring average sliding up into the mid-20s.

By Buck Davidson
This entry was posted on Thursday, September 23rd, 2010 at 1:44 pm and is filed under 2010-11 RotoRob NBA Draft Kit, BASKETBALL, Buck Davidson, Cheat sheets, Sleepers. You can follow any responses to this entry through the RSS 2.0 feed. Both comments and pings are currently closed.