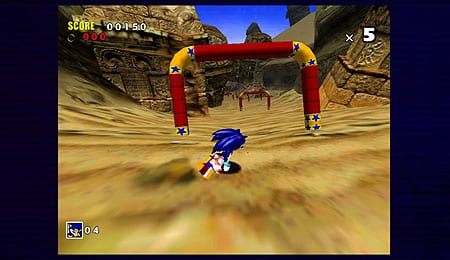 See if you can solve this gaming equation… Hedgehog + Snowboard – Snow = ????

If there’s a more underappreciated console in the history of gaming than the Sega Dreamcast I don’t know what it is. I poured untold hours into games like Shenmue, Power Stone and Soul Calibur, and even more than a decade after its release, the system holds a place of honour in my bedroom entertainment centre.

Thus the announcement that many of these titles would be re-released as downloadable games on Xbox Live Arcade and Playstation Network was met with much excitement. This past week Sega made its flagship launch title, Sonic Adventure, available on XBLA. Did it dampen my enthusiasm or get me even more jacked up for future downloads? The answer waits below…

With the Xbox 360 controller being essentially a modernized version of the Dreamcast’s, things should be familiar in regards to button mapping. However, the analog stick seems alternately unresponsive and entirely too sensitive — two extremely different yet equally annoying issues. I had trouble doing mundane things like picking up coins on the run, and I would also get hung up on areas I don’t recall having trouble with in the original game. After a few hours I was able to compensate better, but it’s still too inconsistent.

As a general rule of thumb, video game graphics don’t age well, and Sonic Adventure is certainly no exception. Despite being re-mastered to display in 720p high definition, backgrounds and character models alike still look pretty clunky. Also helping to make the game feel dated is the lack of widescreen support, forcing the game to run in a 4:3 aspect ratio with borders. On the plus side, the game motors along without a hitch for the most part, an essential quality for a game built around speed.

Sega didn’t mess much with the tunes, which was a good move. There’s plenty of nostalgia value to be found in the game’s pulse pumping tracks, though my favourites (Wind Valley) skew towards a decidedly mellower tempo. The voice work, however, is spectacularly bad. Listening to Tails, who must have been voiced by an eight-year-old, is downright painful. We’re talking epic levels of awfulness here.

The story is that Sonic’s nemesis, Dr. Eggman, has let loose a mysterious creature that he hopes will help him realize his nefarious goals. To achieve this, Eggman must gather the seven Chaos crystals in order to maximize the creature’s destructive potential. Standing in his way is serial do-gooder Sonic and his band of cutesy animal buddies like Tails, Amy and, of course, Knuckles.

It does depart somewhat from the classic Sonic formula as you’ll navigate an “over world” to reach the game’s various action stages. This is the weakest part of the game as you’re often left with minimal direction as to where you need to go next, leading to a lot of aimless wandering. Even when you know where you’re headed, the camera is so woefully incapable of keeping up with Sonic’s speed that you end up getting stuck on objects and banging into things.

Camera issues persist during sections of the action stages as well, though I was still able to navigate my speedy hedgehog through these areas. These levels can be pretty fun despite the fact advancements in gaming have made Sonic Adventure’s signature trait, its speed, somewhat primitive in comparison. My favourite sections are actually the ones where you have minimal control as you travel through sections as little more than a blur — those are definitely the moments that deliver the most nostalgia for me.

Unfortunately, the combination of shaky controls and shoddy camera work make some for frustrating moments during the game. Exacerbating these issues are some bizarre sections where your character will literally fall right through solid ground, leading to numerous deaths that have nothing to do with your skill. I don’t recall encountering this in the Dreamcast release, but it’s been nearly a decade since I played this particular title so I could be blocking it out.

Assuming you can work around the controls and camera, the game actually contains quite a bit of content as Sonic’s own quest spans ten action stages along with sub games and several boss fights. Plus, you’ll unlock the ability to play as five of Sonic’s friends along the way, each of whom has their own smaller quest to complete. There are also items to find, chao’s to nurture and emblems to earn.

The base game with set you back 800 MS points (US$9.99), but those that want even more hedgehog high jinks can download the Director’s Cut as an add-on for an extra 400 MS points (US$4.99), unlocking 60 additional missions as well as Metal Sonic as a playable character.

There are some fun times to be had playing through Sonic Adventure, but wonky controls and a camera that leads to more deaths than your enemies ensure that fun comes at a cost. Long-time fans may well enjoy the stroll down Memory Lane; others should spend some time with the demo before buying.