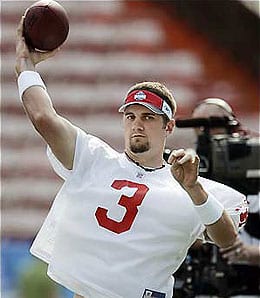 Derek Anderson needs to be firmly planted on your bench.

After another surprising week with the Cowboys and Vikings both dropping to 0-2, and the Texans and Buccaneers each going to 2-0, Peyton Manning beat Eli Manning in the Manning Bowl on Sunday night, as he usually does. There were many breakout games for players who didn’t do much in Week One, like Matt Schaub and Andre Johnson, but also many disappointments and the realization that certain players such as Kevin Kolb, Derek Anderson, Matt Moore and Vince Young should be benched.

Start of the Week: Adrian Peterson vs. Detroit Lions. Peterson should run wild against a poor Lion rush defense.

Biggest Jump: There are two teams with a nine-spot jump, the Dolphins (from 16th to seventh), and the Bears (from 22nd to 13th).

Biggest Drop: The Vikings dropped 12 spots from sixth to 18th, as Brett Favre has failed to play anyting like he did last season.

1. (1) New Orleans Saints, 2-0: Reggie Bush’s loss will show how valuable a player he is as the Saints have a tough divisional matchup against the Falcons. After a tough game against the 49ers’ defense, look for Pierre Thomas to bounce back on Sunday.

2. (2) Green Bay Packers, 2-0: Aaron Rodgers has continued to dominate, but now the Packers will face a harder test against the Bears. However, when the Pack’s running game struggles, look for Rodgers to throw down the field to Jermichael Finley and Greg Jennings.

3. (5) Indianapolis Colts, 1-1: After losing to the Texans in Week One, the Colts bounced back tough against the Giants in a game where Peyton Manning only had to throw the ball 26 times. This whole team should play well against the Broncos on Sunday, especially Joseph Addai and Donald Brown now that they got their running game going. With Anthony Gonzalez out several weeks, Pierre Garcon’s and Austin Collie’s stock goes up, as they did last year.

4. (10) Pittsburgh Steelers, 2-0: Defense is winning the games for the Steelers as they wait patiently for Ben Roethlisberger to get back into action. With Dennis Dixon injured, Byron Leftwich may get the start. Pittsburgh shouldn’t underestimate the Buccaneers, but look for Rashard Mendenhall to get 20+ carries again.

5. (11) New York Jets, 1-1: The Jets got a huge win Sunday, and a great game from Mark Sanchez to quiet the critics after his terrible first outing. It doesn’t help that Braylon Edwards got nailed on a DUI on Monday, but with LaDainian Tomlinson running like he is three years younger, this team is headed for many more wins. First stop is Miami, where Dustin Keller will continue to be Sanchez’s favourite target.

6. (7) Houston Texans, 2-0: What an amazing game it was for the Texans against the Redskins, as they showed the world their pass heavy offense with Matt Schaub almost eclipsing 500 passing yards and Andre Johnson pulling in 12 receptions for 158 yards and a TD. The throwing arms will be out again against a middling Dallas pass defense on Sunday.

7. (16) Miami Dolphins, 2-0: The Dolphins pulled off a surprising win in Minnesota as they intercepted Brett Favre three times, but were unable to contain Adrian Peterson (can anyone?). Next up, the Fins face the Jets — their toughest opponent yet — and they will need to either throw more, or bring the rain with Ronnie Brown and Ricky Williams.

8. (3) Baltimore Ravens, 1-1: The Ravens lost their third straight game to division rival Cincinnati, but their defense did not allow a touchdown. However, Joe Flacco will need a confidence booster to come back hard after throwing four interceptions. It is a perfect time for this game against the lowly Browns; expect Flacco to lead his team big time with help from Ray Rice and Anquan Boldin.

9. (4) New England Patriots, 1-1: It seems as though the Jets may have finally become a better team than the Patriots, however, New England is still a very strong team. The Pats are weak at the running back position after trading Laurence Maroney and losing Kevin Faulk to an ACL injury. And that gives the team even more of a reason to rely on Tom Brady, Randy Moss, Wes Welker, and rookie tight end Aaron Hernandez, as they all go to town on a struggling Bills team (although Buffalo’s pass defense isn’t awful).

10. (13) Atlanta Falcons, 1-1: The Falcons had a big rebound game against the Cardinals, running for 221 yards on 45 carries despite Michael Turner being held out for three quarters. Jason Snelling rose up and tore apart the Cardinal defense. With the Saints next up for the Falcons, things will be tougher and they will need everyone healthy if they want to win.

11. (17) Cincinnati Bengals, 1-1: The Bengals got a big win despite failing to score an offensive touchdown, but a win is a win. They got back to their running game, but look for Cedric Benson to have his big breakout game on Sunday against the Panthers (although Carolina’s run defense isn’t bad). Terrell Owens, Chad Ochocinco, Jordan Shipley, and Jermaine Gresham will be getting most of the targets this week.

12. (12) San Diego Chargers, 1-1: It was a disappointing game for Ryan Mathews as he fumbled once again and missed three quarters with an ankle injury. However, he should be able to go in Week Three, as he will look to have his breakout game against Seattle, although it won’t be easy against a very strong Seahawk run defense. Philip Rivers is back in winning mode as he has been targeting Malcolm Floyd and Antonio Gates.

13. (22) Chicago Bears, 2-0: Jay Cutler had a phenomenal game with 277 passing yards, three TDs and no interceptions. The Bears’ next game is on Monday night against the Packers, which will be their biggest game yet, and will need to get their running game with Matt Forte going again (and that could happen against a weak Green Bay rush defense), but regardless, Chicago is off to a great start.

14. (18) Philadelphia Eagles, 1-1: We all knew this day would come when Michael Vick would get out of jail and start in the NFL again. And man, did he do well or what? With the help of LeSean McCoy and DeSean Jackson, Vick led his team to a victory and on Tuesday was announced as the Week Three starter. Matched up against Jacksonville and its awful defense, this three-headed monster should put up big numbers.

15. (15) Washington Redskins, 1-1: The Redskins could be 2-0 if it wasn’t for Gary Kubiak’s timeout to ice Washington’s kicker, Graham Gano. Donovan McNabb has great chemistry with his new team; look for it to improve in St. Louis against a weak Ram defense on Sunday. Santana Moss and Chris Cooley are his favourite targets so far.

16. (9) Tennessee Titans, 1-1: Chris Johnson was completely shut down by the Steeler defense, however, he should be able to bounce back against a weak Giants’ rush defense. But Johnson will need help from Vince Young to spread the field, and that may be more difficult, as New York’s pass defense isn’t bad and, well…Young sucks.

17. (8) Dallas Cowboys, 0-2: Dallas is off to a surprising 0-2 start with another tough matchup against the Texans and their red hot offense. The Cowboy running game is struggling big time, but Tony Romo, Miles Austin, and Dez Bryant continue to shine on the Fantasy side of things.

18. (6) Minnesota Vikings, 0-2: Even though Peterson had a great game and got his first touchdown, Favre was terrible and the Vikings lost again. But with the Lions lined up on Sunday, things are looking up for Minny. It gives the Vikes a chance to dominate and boost their confidence with a win. Minnesota could use the help of Vincent Jackson, who was rumoured to be on his way to the Vikings, although that looks less likely now. For now, Peterson will continue to carry a heavy load.

19. (14) New York Giants, 1-1: Brandon Jacobs’s outbursts are giving Ahmad Bradshaw most of the carries. The Giants need to get Steve Smith back up to big numbers, but for now Hakeem Nicks is one of the go-to guys as Eli Manning tries to bounce back, but it’s a tall order against the Titans and their top-ranked pass defense.

20. (23) Kansas City Chiefs, 2-0: The Chiefs are relying heavily on Thomas Jones and Jamaal Charles, but when they are playing from behind, does Matt Cassel have what it takes to win?

21. (28) Tampa Bay Buccaneers, 2-0: I don’t think the Buccaneers’ winning streak will continue this week against the Steelers. Cadillac Williams continues to be worked hard with 27 carries last week, but he only averaged 1.9 yards against the Panthers, so don’t expect much against Pittsburgh.

22. (25) Denver Broncos, 1-1: What a debut by rookie Demaryius Thomas, who seems to be Kyle Orton’s favourite target now. The Bronco running game will need to average more than 1.7 yards per carry, which looks likely facing the Colts and the NFL’s worst rush defense this week.

23. (20) San Francisco 49ers, 0-2: The ‘Niners had a close call on Monday, but it was not enough to defeat the defending champions. Frank Gore had a breakout game but Vernon Davis was only targeted once in the first half. Gore and Davis should both have great games on Sunday against the Chiefs’ weak defense.

24. (19) Arizona Cardinals, 1-1: Max Hall is not yet ready, but hopefully he will be in the near future if Anderson keeps playing like this. Beanie Well’s status is still up in the air, but Larry Fitzgerald remains a big target for Anderson.

25. (24) Jacksonville Jaguars, 1-1: There you go, Mike Sims-Walker had his big game after not catching anything in Week One. Maurice Jones-Drew is struggling so far this season, but he gets the Eagles Sunday, and their run defense has struggled so far, so look for MJD to break out.

26. (21) Seattle Seahawks, 1-1: Matt Hasselbeck struggled last week and may do so again against the Chargers after San Diego’s defense tore up David Garrard last week.

27. (27) Oakland Raiders, 1-1: Darren McFadden is finally starting to become an NFL running back. He is healthy and showed it by carrying the ball 30 times for 145 yards against the Rams last week. Jason Campbell has now been benched for Bruce Gradkowski as the Raiders travel to Arizona to face the Cardinals and their weak pass defense.

28. (29) Detroit Lions, 0-2: What a game by Jahvid Best; he is the start of something big in the future for Detroit. Playing Minnesota and its strong pass defense on Sunday will not be easy, but Best, Brandon Pettigrew and Calvin Johnson are being targeted big time by Shaun Hill.

29. (26) Carolina Panthers, 0-2: The Panthers are another team falling apart without their running game, although DeAngelo Williams and Jonathan Stewart did do better than in Week One. Jimmy Clausen is the new starter and in his first game he’ll face the Bengals, a team that intercepted Flacco four times on Sunday.

30. (31) St. Louis Rams, 0-2: Sam Bradford was again close to a win, but is still seeking to bust his victory cherry. It won’t get any easier this weekend against a solid Redskins team.

31. (32) Cleveland Browns, 0-2: With no running game and an average passing game, the Browns do not have what it takes to beat the Ravens on Sunday. Replacement starter Seneca Williams didn’t have a great game, but the 65-yard TD strike he threw was the longest by a Brown QB in three years.

32. (30) Buffalo Bills, 0-2: Marshawn Lynch is the starting running back now, but benching Trent Edwards for Ryan Fitzpatrick won’t provide the spark the Bills are looking for.

By Trevor Blake
Tags: NFL
This entry was posted on Wednesday, September 22nd, 2010 at 12:05 pm and is filed under FOOTBALL, NFL Power Rankings, Trevor Blake. You can follow any responses to this entry through the RSS 2.0 feed. Both comments and pings are currently closed.