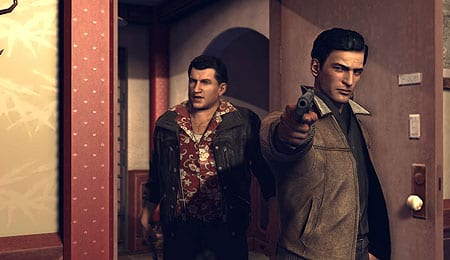 Vito dares anyone to say something about Joe’s snappy shirt.

Like the recently reviewed Kane & Lynch 2: Dog Days, Mafia II splits the sprinting (left bumper) and entering cover (A button) commands. However, with more objects to duck behind and a heartier protagonist, it doesn’t feel like as much of a hindrance here. What does make life unnecessarily difficult, though, is the inability to blind fire your weapon — it’s tough to emerge unscathed when you’ve got multiple enemies unloading on you. Making the omission even stranger, the A.I. possesses the ability to blind fire at you.

Melee combat is rudimentary as holding down the “A” button allows you to evade all punches, leaving you to simply wait for an opening to unload your own combos. Driving feels a bit loose, but considering the game is simulating car handling from the 1940s and ’50s it could be more of a design choice. Regardless, I felt like it was too easy to lose control of your car, and fishtailing was rampant.

Mafia II’s lengthy development cycle has allowed 2k Czech to work in an incredible amount of polish and detail into Empire Bay. The sprawling cityscape does a great job of capturing the era — check out the vintage propaganda posters during the gas stamp mission — and when the narrative skips ahead you’ll notice significant differences in the general ambiance. Vehicles are lovingly recreated and body shops around town allow for some modest customization.

Character models generally look very good, though the lip synching is frequently off and some of the movements have a robotic feel to them, particularly those of non-essential NPCs. The lack of authentic actions makes Empire City, a place teeming with people and cars, feel somehow hollow and more like a façade than a living, breathing metropolis where life goes on whether you’re present or not. Maybe it’s nitpicking given how beautiful so much of it looks, but I couldn’t shake the feeling and it hurt the level of immersion as a result.

Where Mafia II is nearly bulletproof is in the audio department. The voice acting is consistently excellent from the main characters on down, and it’s a credit to 2k that it didn’t cast any instantly recognizable talent. It definitely serves to help keep you invested in the story instead of thinking about how one of the characters sounds exactly like Tony Soprano. The dialogue also flows naturally and rarely gets bogged down in clichés as 2k continues closing the gap on BioWare and Rockstar.

The game’s soundtrack is also excellent, featuring well over 100 licensed songs from the era. Mixing those tunes with things like World War II news updates and deliciously cheesy DJ talk makes the in-game radio stations a major part of the overall feel.

You play as Vito Scaletta, an Italian immigrant sent to fight in Italy during WWII after running afoul of the law. The game begins in earnest when Vito returns to Empire Bay for extended leave after being wounded in battle. He’s barely off the train when longtime friend Joe Barbaro, now associated with some wise guys, helps Vito by getting him permanently discharged. From there it’s all about Vito and Joe as they attempt to rise through the ranks.

The narrative is Mafia II’s strongest selling point as you’re treated to a well-written and engaging cinematic experience over the game’s 15 chapters (roughly 12 hours). Dialogue is excellent, characters are well fleshed out, and the story does a good job of keeping you on your toes without relying on completely random plot twists added purely for shock value. It’s exceedingly well done.

However, the game’s deliberate pacing comes with some drawbacks. Most glaring is the excessive amount of time you’ll spend driving around Empire Bay. I’m not talking about high-speed pursuits here, either. I’m talking about what amounts to mundane errand running. For instance you might finish a mission and have to drive to a bar to discuss it, then to Joe’s house to drop him off before finally driving home to advance to the next chapter. Throw in cops that’ll pull you over for speeding and you’ll find a significant chunk of time is devoted to essentially puttering from Point A to Point B.

Exacerbating the issue is that despite the size and open-world status of Empire Bay, there really isn’t much to do. Sure, you can buy a handful of items or steal cars for cash, but this is a very linear game and for the vast majority of it none of the peripheral activities are necessary. That streamlined approach keeps the story driving forward, but it lacks the diverse selection of time wasting activities of a Grand Theft Auto or Saints Row title.

With few exceptions, missions boil down to third-person cover-based shooting, and for the most part it holds up very well. There’s ample cover to use and the game rewards patience while punishing those that charge into the open or spend too much time exposed, though the aforementioned inability to blind fire remains an odd exclusion. Cover will take damage with some pieces being fully destructible, while others simply chip away. Unfortunately, there are still occasions where you’ll appear completely sheltered and yet still absorb damage, which is always frustrating.

While most of your time will be spent shooting and/or driving there are a handful of missions that stray outside of that formula to great effect. The stealth mechanics, while not the most refined in gaming history, get the job done and are responsible for some of Mafia II’s coolest moments — such as sneaking through a slaughterhouse looking for abducted members of your crew.

Mafia II also gets props for delivering one of the more organic (and desirable) collectibles ever seen in a game as there are 50 vintage issues of Playboy scattered throughout the game. Find them and you’ll unlock the centrefold in all her glory. Sadly, no articles are included, which is of course what most of us buy Playboy for. There are also 159 Wanted posters to find that encourage exploration.

Even with no multiplayer and limited replay value, Mafia II still manages to carve out a niche on the strength of its characters and storytelling. It’s not the type of game you’ll play over and over again, but it’s absolutely worth playing through at least once.