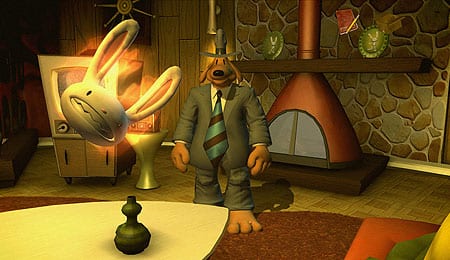 Even though Max is a giant monster, floating “Not Max” spores still provide his typical wit and maniacal wisdom.

When we last left Sam and Max at the end of Sam & Max: The Devil’s Playhouse, Episode 4 — Beyond The Alley Of The Dolls (you got all that?), Max’s Toys of Power had been destroyed and Max had been turned into a gigantic, city-stomping beast hellbent on destroying New York City. We also left with an episode that, well, just wasn’t that enjoyable outside of the strong writing and comedic characters.

Now comes the thrilling conclusion. Will Max survive? (That’s up to you to find out.) Are there more than just a few rooms to explore? (Yes, thankfully.) Is this the first time Satan has filmed a public service announcement in a game? (I believe so.) Yes, bring on Sam & Max: The Devil’s Playhouse, Episode 5 — The City The Dares Not Sleep.

Not much has changed from The Devil’s Playhouse Episode 4, so the control score remains the same. The gist of that — the controls are adequate for adventure gaming, but are clunky, and you’ll have to use the trigger buttons to cycle through possible interactive objects rather than trying to get Sam to face the right way. The big change is that Max’s Toys of Powers were destroyed at the end of Episode 4, so you won’t be going into the first-person perspective to enact psychic toy mayhem on anyone.

In some areas, the room spaces have large objects to maneuver around, and that makes this even more so. There are brief moments when the game takes on a different navigating perspective, but the movement issues even come through here. Such is the life of the adventure gamer, where precision is replaced with writing and puzzle-solving.

Episode 4 featured only a few areas that were revisited, and those were usually dimly lit. While Sam & Max games might have a pseudo-noir feel to them, low lighting takes away the whimsical nature of the series.

Fortunately, Episode 5 features more variety, both in areas and in colour. This makes the cartoonish graphics jump off the screen, and while the polygon count won’t rival Uncharted or Crysis (remember, this is released across all consoles and for PC), they’re crisp and fitting for the adventure at hand.

The voice acting is rock solid as always. Sam offers deadpan humour with appropriately restrained life, while Max (both in monster form and floating spore form) is enthusiastic in his ridiculousness. Other cameos from Satan, a German vampire filmmaker, a lonely talking computer, and other wacky characters have all been given perfect voice actors, and you’ll feel immersed in this very strange world that lays before you. One of the highlights of the game’s production is the opening credits, which sets our heroes in a ’70s cop show montage. I can’t even explain it, but it’s probably one of the biggest laughs in the game.

Beyond The Alley Of The Dolls suffered greatly from its limited amount of areas. There’s nothing wrong with having limited movement in an adventure game, but physically confining you to the same rooms really hampers the fun factor. With Episode 5, new areas are traversed, some in disgustingly interesting situations, and each new section has several rooms or areas to explore. It’s not an open-world adventure like the old King’s Quest games by any stretch, but the variety definitely works.

Puzzle solving, of course, is at the heart of any good adventure game. With the Toys of Power destroyed at the end of Episode 4, you won’t get to go into Max’s head for solutions. That means that a lot of the structure follows more traditional adventure game puzzle solving: dialogue and inventory. One of Tell Tale’s more puzzling design decisions is to emphasize dialogue on a number of puzzles. Usually, the dialogue opens up the quest for an object or action, but in many cases here, the dialogue is the answer. This feels almost too simplistic when the stakes are this high — after all, a giant mutant bunny is thrashing around New York City. Because of that, you get fewer a-ha moments that are the treasures of adventure games.

This higher emphasis on the dialogue does put a spotlight on the witty writing. For Episode 4, I mentioned that I would have put it away if the characters and dialogue hadn’t carried the game. Episode 5 is markedly better, but it’s still those two things that really push the game forward. Each character is distinct in motivation and personality, and the comic moments are plentiful. While Max is off being a giant monster, his spores (floating Max heads, or “Not Max” as Sam calls them) are still around to talk to, and they give indirect hints when necessary. One of the strengths of Sam & Max games is the chemistry and interaction between the titular pair, and this device allows that to keep up despite Max’s absence.

Episode 5 of The Devil’s Playhouse does what any good finale should, at least storywise — it ups the stakes and puts everything in a crisis situation. This is, however, a Sam & Max game, so absurd humour (yes, that robot is quoting song lyrics from the 1990s and early 2000s) peppers the journey. And for better or worse, this is a Tell Tale adventure game, so the controls are locked into the previously established engine, which means that those new to the adventure game genre will be frustrated by the lack of precision.

Still, despite the surprisingly streamlined puzzle solving, it’s a well-paced game with endearing characters. Most importantly, it’s fun — and funny — and for the price, you can’t really argue with that. Bring on the next season of Sam & Max!

By Mike Chen
This entry was posted on Sunday, September 12th, 2010 at 4:39 pm and is filed under Mike Chen, Video Game Reviews. You can follow any responses to this entry through the RSS 2.0 feed. You can skip to the end and leave a response. Pinging is currently not allowed.