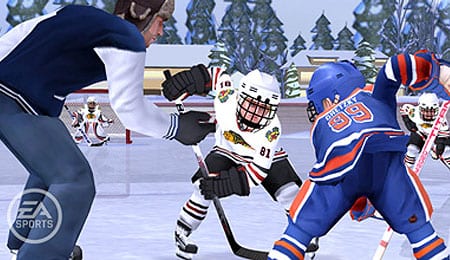 NHL Slapshot’s Peewee To Pro mode is the Wii equivalent of Be A Pro mode from the NHL series of games.

EA Sports’ NHL series is the undisputed leader of hockey video games, so much so that its main competition (NHL 2K) cut off its XBox 360 and Playstation 3 development solely to focus on the Nintendo Wii market. Now EA fires back with NHL Slapshot, an arcade-style hockey game featuring motion controls and Wayne Gretzky. While this isn’t The Great One of hockey video games, it’s an All-Star in its own right: easy to pick up and fun to play despite being fairly one-dimensional.

NHL Slapshot essentially includes two modes, skater and goalie. For the skater, the Wii remote and nunchuck are both put into a hockey stick attachment, with the nunchuck up top and the remote at the bottom. The nunchuck analog controls your skater, though you can leave this alone and let the computer control your skating. The stick is moved to simulate shooting — a quick flick for a wrist shot, a small wind-up for a slap shot. The “A” button passes the puck, and the “Z” button offers a speed burst. You can also use the stick to check by doing a cross-checking motion, which is obviously illegal in all levels of hockey. That’s right folks, EA Sports is teaching our youth to be dirty hockey players.

The “B” button acts as a modifier, turning your stick movements into dekes. Unfortunately, this whole action lacks precision, and there’s a lag between releasing the “B” button and trying to shoot again. Wii Motion Plus wasn’t incorporated so dekes feel stiff and canned; this aspect suffers, especially for anyone that was hoping for a motion equivalent of the right analog stick control from NHL 11.

Additional motion movements are available for playing defense by blocking or lifting the stick. However, the detection for these isn’t very accurate, and in most cases, this caused my player to attempt a check. In the end, I just stopped doing this and started checking everyone as a means to play defense.

Overall, though, it’s quite simplified compared to the many control of the parent NHL incarnation. And considering the target audience, it gets the job done. For the goalie controls, it’s even more simplified — the nunchuck is your glove hand and the Wii remote is your blocker. The lack of precision here also comes into play, and what seems like a fairly obvious but cool setup suffers and turns goalie mode into a glorified twitch session.

When sports video games made the leap to the Playstation 2 and XBox era, graphic fidelity had finally gotten to the point where you could actually recognize players by their facial model. That’s why it’s pretty disappointing to see NHL Slapshot’s graphics regress where much of the players look fairly generic. It’s difficult to tell if this was an intentional decision or if the development team focused more on other aspects of the game, as the Wii hardware is more than capable of exceeding PS2-level graphics (though its software library shows that the potential isn’t used often enough).

The arenas (NHL, AHL, and CHL) are fairly standard for sports games, with sprite-driven crowds and board ads. You can play on frozen ponds and outdoor neighborhood rinks, and these have nice touches, such as the lights from the neighborhood homes. It’s all given a cartoony look, which fits the arcade-style action. This is emphasized by the extra animations, like a comet tail on slap shots or a flash on a hit. If NHL 11 is the king of sim hockey, this is the polar opposite.

Slapshot’s commentary is essentially lifted from prior NHL games, so it’s up to the quality you expect. If you like Gary Thorne and Bill Clement, then it’s right up your alley. If you don’t, well, tough luck because you’re stuck with them.

One thing to note about the game’s musical soundtrack: it’s essentially a playlist of popular songs you’d hear at any sporting event. However, because of the game’s younger target market, it’s one of the few times you’ll hear The Ramones’ Blitzkrieg Bop censored, as the word “shoot” has been removed from the line “Shoot ’em in the back.”

The simple way to measure NHL Slapshot’s success comes down to one question: is it fun? The answer is yes, the core game mechanic with the hockey stick attachment is fun for kids of all ages. There’s something satisfying about physically doing a cross-check to check an opponent into the boards, or firing off a slap shot top corner. The controls are simple enough that anyone can pick them up, especially if you let the computer do the skating for you. On this level, it essentially replicates the success Nintendo had with the Wii Sports package.

Over the years, the NHL series’ AI has grown through leaps and bounds. Teams will trap, cycle the puck, and crash the net. Not so here; Slapshot is meant for arcade-style gaming, and the level of complexity from the computer reflects this.

Of course, EA Sports is known for its thoroughness, and NHL Slapshot comes with a variety of modes. You can play a season with a team or just the Stanley Cup Final, including the ability to create a logic-defying match-up between teams in the same conference. There are mini-games to test your skill, as well as the ability to play at the junior and minor league levels.

The meat — and longevity — of the game comes down to Peewee To Pro mode, which is essentially Slapshot’s version of Be A Pro mode from the NHL series. You can pick different starting points for your player, from a kid playing Peewee (in 3-on-3 games) to starting in the NHL. This includes optional character creation, though you can start as an existing NHL player, either as a kid in Peewee or as a newly drafted pro. Like in Be A Pro mode, you will be that player at all times. After games, you’ll earn experience points, which you can distribute to things like acceleration, agility, and shot power. You’ll also unlock additional bonuses to power up your hitting, shooting, or other attributes.

Peewee To Pro mode succeeds in that it ports over the depth (to a certain degree) from the NHL series, but integrates it into an appropriate level for the casual/arcade style in Slapshot. It also highlights one of the biggest disappointments of the game: goalie mode. When you select your player for Peewee To Pro, you also select your position. If you’re a goalie, then you’re going to go with a career using the goalie remote/nunchuck controls noted above.

In theory, the goalie control setup makes sense — one control to match each arm, with the ability to go down (both controls down) to block low. However, the Wii’s inherent inaccuracy turns this from a skill into a reflex game, and not much of one at that. A shake of the nunchuck does a glove save animation, and a similar movement of the remote does a blocker save. Both are canned animations, and aren’t terribly responsive, meaning that you may or may not be flailing either arm at the appropriate time — or trigger the move to drop down on your pads. Goalie positioning is computer-controlled and the view is awkward so you never really get the sense that you’re playing goal but just making motions hoping that it’ll work, kind of like that kid who used to suit up in full gear and mimic Martin Brodeur several rows behind the glass at Devil games.

NHL Slapshot is a lot of fun, and is the perfect hockey game for younger sports fans or casual gamers. The lack of control precision can be frustrating, especially for hardcore puckheads hoping for just a tad more realism out of the game. However, the core game mechanics translate hockey well enough that you’ll have a great time shooting and checking on the ice.

By Mike Chen
Tags: EA Sports, NHL
This entry was posted on Monday, September 13th, 2010 at 1:36 pm and is filed under HOCKEY, Mike Chen, Video Game Reviews. You can follow any responses to this entry through the RSS 2.0 feed. Both comments and pings are currently closed.