Dear RotoRob: Who Should I Dump? 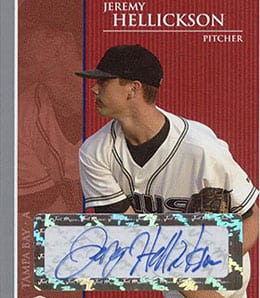 Jeremy Hellickson can now be cut in shallower formats.

This is my roster right now. I have a 2B going back on DL, a hurt Michael Brantley, and some SP that could lose rotation spots (Jeremy Hellickson), or have their innings pitched limited (Mat Latos, etc.).

I have a roster spot dedicated towards streamlining pitching. So anything you see I need to drop?

Or would I be better served moving Young to 2B, dropping Brantley and using both his spot and the DL replacement spot to shore up on offense?

We have a lot to cover here, so let’s get started. Your first question concerns Hellickson. He’s currently down at Single-A, where he’s working on making the conversion into a reliever for his September call up to help the Ray bullpen. Unless Tampa Bay is faced with an injury situation, he will be working out of the pen the balance of the year, much like David Price did in his first taste of the majors a couple of years ago. In a league as shallow as yours the pitching options will be plentiful, so assuming Hellickson remains in the pen over the duration of the season as I believe he will, you should cut him loose. His value to you as a reliever is minimal and you’d be better off looking for a starter on the wire.

Latos is enjoying an incredible year and, yes, in all probability his IP will be monitored. That being said, he is an integral part of the Padre rotation and he will be starting down the stretch as San Diego moves towards clinching the NL West. My guess is you’ll see him going no deeper than 90 pitches per start, but based on his recent performances that should still give him plenty of win opportunities.

Shifting Young to 2B is a solid plan. He’s going to get an extended look with the Rockies and with his speed should be an asset to your squad. The Indians are claiming that Brantley will be returning during their next homestand, but with a sprained ankle how effective is he going to be in the short term? I’d scan the waiver wire and find the best power bat available and insert him in your utility slot.

As a bonus, we’ve got a very short Fantasy football question here, so we’re going to toss it into the mix.

Thanks to your help last year I made it to my championship game. I am drafting second in our 14-team league this year. My question is I have offers to trade my spot. I can get anywhere from pick six to eight. Normally I would never consider giving up the No. 2 pick, but it’s a long snake draft back to me from the second pick. Am I crazy for even
thinking about a trade or do you see some value in drafting in the middle of 14 teams?

Well, there are several factors here: Do you believe that owning one of the top two picks gives you a distinctive advantage? If so, keep your pick. If not, are you getting enough back in return to justify dropping down to the middle of the pack?

If the long wait is your only worry about being at No. 2, I’m not sure I’d budge on this. Don’t forget that the beauty of being at the front or back of a snake draft is the near back-to-back picks you’ll get. Yes, there’s that long wait in between, but I’d still rather be top two than middle of the pack.

And as far as whether you’re crazy or not, we’ll leave that analysis to people far less crazy than ourselves.

Keep the pick and win your damn league!

By Tim McLeod
This entry was posted on Wednesday, August 25th, 2010 at 1:49 pm and is filed under BASEBALL, Dear RotoRob, Tim McLeod. You can follow any responses to this entry through the RSS 2.0 feed. You can leave a response, or trackback from your own site.