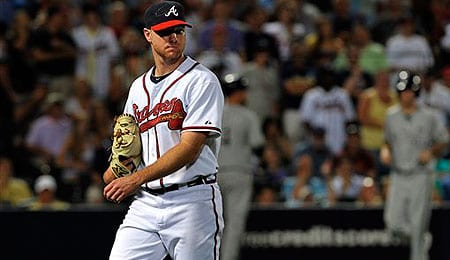 Possible closer of the future Jonny Venters has been so sharp this season, but he suffered a costly meltdown Wednesday.

The Tampa Bay Rays are still atop the standings, but who knows for how long. The season-long battle between division the Rays and division rival New York seems like it will continue until October.

Biggest Jump: The Florida Marlins jumped three spots from 19 to 16 after winning five in a row last week to get back above .500.

Biggest Drop: The Los Angeles Angels and the Washington Nationals dropped two spots each as they have both gone just 3-7 in their last ten games.

1. (1) Tampa Bay Rays, 78-49: While fiercely battling the Yankees for the top spot in the AL East and the best record in the Majors, the Rays continue to hold on after splitting their series with Oakland and winning their series against the Angels on Tuesday night. In seven starts since the All-Star break, David Price has gone 3-1 and surrendered just one home run in 42.1 innings.

2. (2) New York Yankees, 78-49: Despite losing their series in Toronto, the Yankees are still tied with the Rays for first place, and look to their veterans to keep winning with C.C. Sabathia inching towards his first 20-win season.

3. (3) San Diego Padres, 76-49: Only two wins behind the best record in the Majors, the Padres continue to be one of the hottest teams this year, winning seven of their last ten, and going 24-12 since the All-Star break. One of the biggest surprises of 2010 is closing in on its first division title in four years.

4. (4) Atlanta Braves, 73-54: Not only were the Braves swept by the Rockies in Colorado, but they threw away the win in the finale Wednesday, giving up a nine-run lead after the third inning, thanks to a meltdown by the normally dependable Jonny Venters, who gave up four earned runs in the eighth inning.

5. (6) Cincinnati Reds, 73-54: It looks like possible NL Triple Crown winner and/or NL MVP Joey Votto is leading his team to a NL Central division title if the Reds can keep holding off and solidifying their lead over the Cardinals during this last stretch to the playoffs.

6. (5) Minnesota Twins, 72-55: After not having lost a series since the All-Star break, the Twins dropped three in a row in Texas by scores of 4-0, 4-3, and 4-3. They hope to prevent a four-game sweep on Thursday in what should be a low-scoring affair with the great pitching match up of Francisco Liriano vs. Cliff Lee.

7. (7) Texas Rangers, 72-54: Since being swept by the Rays in Tampa, and losing two of four to the Orioles in Baltimore, the Rangers made a quick turnaround, winning four in a row and taking their last three against the Twins. In the opener, Rich Harden made a great comeback start and on Thursday, Texas gives the ball to Lee in the hopes of finishing off the four-game sweep.

8. (8) Boston Red Sox, 73-55: Even with all of their injury problems, the Red Sox continue to win, and even though they are 5.5 games behind both the Rays and the Yankees, the Sox are second in the AL Wild Card race, four games ahead of the White Sox.

9. (9) San Francisco Giants, 71-57: The Giants have struggled to string together a real winning streak lately, and Tim Lincecum has been a microcosm of the problem, as he has struggled to find consistency, dropping four straight starts and giving up 18 earned runs on 19.1 innings pitched in August after a strong July.

10. (10) Philadelphia Phillies, 70-56: Only 2.5 games behind the Braves, the Phillies continue to match Atlanta game for game, as each team has dropped three straight. But while Atlanta has been losing to a decent team in Colorado, the Phils have lost the first three games of a four-game series against Houston — a team they need to be chewing up and spitting out. If the Phillies want to avoid a sweep at the hands of the Astros Thursday, they’re going to need Kyle Kendrick to pick up his game.

11. (11) St. Louis Cardinals, 68-56: The Cards are not showing how much they want to beat the Reds for the division after losing a series this week to the NL’s worst team, Pittsburgh. St. Louis now heads to Washington; can the Cards shake off their doldrums against another weak team?

13. (14) Colorado Rockies, 66-60: A bad second half of the season has been slightly alleviated by the sweep over the Braves. Colorado flashed some of that second-half magic it’s become known for in recent seasons when it overcame a nine-run deficit Wednesday to complete the sweep as Troy Tulowitzki sealed the win with a go-ahead RBI single in the eighth.

14. (13) Toronto Blue Jays, 66-60: Winning their series against the Yankees must feel nice for the Jays, coming off Monday’s good vibes of Jose Bautista reaching 40 homers. Yes, we want him to pee in a cup as well.

16. (19) Florida Marlins, 63-62: This streaky team can seem only to lose the same amount of games that they end up winning, although you have to be impressed by the stinginess of Anibal Sanchez, who has only given up six home runs in 24 starts after getting tagged for ten long balls in just 16 starts last season.

18. (16) Los Angeles Angels, 63-65: Since joining the Angels, Dan Haren has gone 2-4 and seen his strikeout drop to 5.9 Ks/9 after he averaged a whiff per inning in the desert. Could Haren even throw one past the Rally Monkey at this point?

20. (20) Detroit Tigers, 63-64: The Tigers have won five of their last six games including a sweep of the Indians after losing three of four against the Yankees. Will Rhymes has done a great job, batting .310 since taking over second base from Scott Sizemore in July.

21. (21) Milwaukee Brewers, 59-67: The Brew Crew played great last week, going 4-1 against the Cardinals and Padres only to lose their last three and face a possible sweep by the Dodgers on Thursday at home. Milwaukee has blown mid-inning leads in both of the first two games of this series against an LA club that had previously struggled badly on the road. Nothing like a visit to Sausage City to shake off a slump, eh?

22. (22) Houston Astros, 57-69: The Astros started out their ten-game road trip through the NL East by losing the first two, but turned it around to win the next four, including three in Philadelphia as Houston looks to complete the sweep on Thursday before continuing its road trip in New York against the Mets. The Astros have done it with pitching, limited the Phils to two runs in each of the first three games of the series.

23. (25) Kansas City Royals, 54-73: After playing 31 innings in less than a full day against the White Sox, the Royals won two of three behind unlikely heroes Yuniesky Betancourt and Jason Kendall.

24. (24) Chicago Cubs, 54-74: Lou Piniella is gone, and since then, the Cubs are actually winning. They swept the Nationals, in part thanks to Carlos Zambrano’s performance Tuesday, his second straight strong outing since returning to the rotation.

25. (23) Washington Nationals, 53-74: The Nats are skidding, going 3-7 in their last ten games including four straight losses during which they’ve been outscored 24-5. And now they face a tough four-game series against the Cardinals, a team against which Washington has dropped its last six games.

26. (26) Cleveland Indians, 50-76: The Indians have lost five straight including being swept by the Tigers, and a facing another sweep by the Athletics on Thursday in what would be Oakland’s first series sweep in Cleveland in eight years. It looks like Cleveland’s sudden winning ways after the All-Star break are long gone as this team has dropp back down the rankings thanks to a 7-15 mark in August.

28. (27) Arizona Diamondbacks, 49-78: After losing seven of their last ten games, things don’t get any easier as the Diamondbacks must face the Padres and the Giants twice each over the next two weeks. On Thursday, the D-Backs will look to avoid an 0-9 season sweep at home against the Padres. Yes, it’s been a long summer in the desert.

29. (29) Baltimore Orioles, 45-82: Thanks to Josh Bell’s first two major league home runs, the Orioles managed a split in their four-game series against the Rangers.

30. (30) Pittsburgh Pirates, 43-84: Surprisingly, the Pirates have won three of their last four including winning their series against the Cardinals this week, but I don’t think this will last long going as Pittsburgh now heads to Milwaukee and then Chicago. Daniel McCutchen looked very sharp in a spot start Wednesday to help the Pirates to a win, but he’s headed back to the bullpen. Of course he is. When have they ever stuck with what works in Pittsburgh? By the way, for those of you that had August 20 as the date that the Buccos would clinch an 18th consecutive losing season, congrats!

By Trevor Blake
This entry was posted on Thursday, August 26th, 2010 at 1:20 pm and is filed under BASEBALL, MLB Power Rankings, Trevor Blake. You can follow any responses to this entry through the RSS 2.0 feed. Both comments and pings are currently closed.