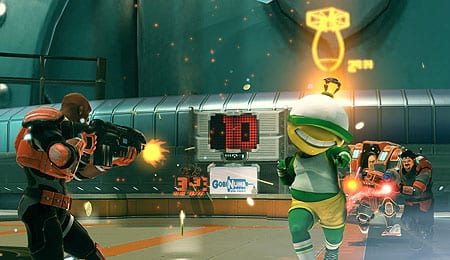 Bullets fly and money rains when Bullseye is around…and no, the character isn’t modeled after Pacman Jones.

For the second time in the past couple of weeks an Xbox Live Arcade shooter has found its way onto my review desk. However, the similarities between Monday Night Combat and Blacklight: Tango Down end there as Uber Entertainment chose to differentiate rather than emulate full retail releases like Modern Warfare 2, making for a much more unique game.

There’s a pretty standard setup at work here, though a couple things feel out of place. The two biggest ones were using the right bumper to reload and having the left trigger aim down sight with some guns and not others — even after several hours I’d still end up tossing bombs when I meant to reload. You’ll also have to familiarize yourself with the face buttons as outside of A (which jumps) they’re different for each class. It’s not tough, but do expect a modest learning curve.

Anyone that’s played Team Fortress 2 will immediately make the comparison given the similarly cartoonish appearances of the characters. That we’ve seen a graphical style like this before doesn’t diminish how effective it is, however, as the bright colours and over-the-top presentation convey the game’s light-hearted vibe.

The only significant area of concern is the amount of slowdown you’ll see when too many bots fill the screen at once. Making matters worse is that the dip in frame rate tends to happen during key situations like when your Money Ball is being overrun.

How you feel about the game’s audio presentation will depend greatly on whether or not you like the hokey announcing. I fall somewhere in the middle. He’s got the right tone and cheesiness factor, but his lines repeat too frequently, which can make the act wear thin. Sound effects such as explosions and weapon fire are dynamic and compliment the visuals well.

Monday Night Combat is more than just a standard third-person shooter as it adds layers of strategy by offering six different characters classes (each with their own pros and cons) and a tower defense element that has you constantly adjusting and shifting tactics on the fly. It’s a balancing act between upgrading your skills, building defense turrets and spawning bots to attack the enemy. The game’s ability to pull this off gives each match a different feel and helps offset what would otherwise be considered a pretty light content offering.

In fact, Uber Entertainment’s debut effort comes packed with a handful of stadium locations and just two modes: Blitz and Crossfire. Blitz, which can be played locally or online, pits you and up to three teammates against waves of enemy bots as you must protect your Money Ball. Crossfire has an identical goal but places six human-controlled players on each side. Both modes can get pretty chaotic and they’re a nice reprieve from the ubiquitous Team Deathmatch.

Each game starts with you choosing from the game’s six classes, and your decision greatly influences your tactics — Assassins are agile but weak while Gunners can deal and absorb damage, but make stationary targets. You spawn with limited funds to improve your skills and/or build defenses, and once it starts, each kill nets you more cash for additional upgrades. Monday Night Combat’s wacky mascot, Bullseye, will also show up randomly to drop money and items while being pelted with bullets.

The in-game action is crisp and there’s usually plenty of ebb and flow to each match. All six classes have their uses in both modes, and when your team achieves that perfect blend of offense and defense it’s really a lot of fun. My primary concerns centre on longevity given the dearth of modes and minimal variety from one combat arena to the next. Uber Entertainment is promising continued support, but only time will tell if it can do enough to maintain an active community, an area where plenty of full retail games have failed.

Monday Night Combat combines tongue-in-cheek humour, cartoonish graphics and well-balanced gameplay to create a refreshing change of pace from the cookie cutter shooters currently saturating the gaming landscape. There are still a few kinks to be ironed out, but at 1,200 MS points (US$15) it’s well worth the investment.

By Herija Green
This entry was posted on Tuesday, August 17th, 2010 at 12:12 pm and is filed under Herija Green, Video Game Reviews. You can follow any responses to this entry through the RSS 2.0 feed. Responses are currently closed, but you can trackback from your own site.