Video Game Review: Lara Croft and the Guardian of Light 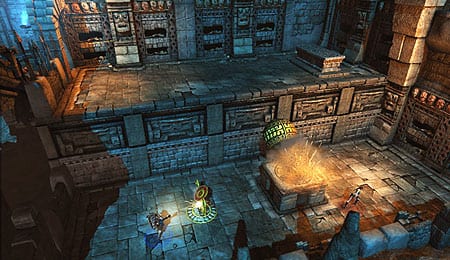 Even at 2,000 years old, Totec can still wield a gatling gun…

Xbox Live’s Summer of Arcade comes to a close this week with the release of Lara Croft and the Guardian of Light. It’s a reimagining of sorts for Eidos’s long-running Tomb Raider series, which once again puts you in the signature short shorts of Lara Croft for plenty of platforming, puzzle solving and dual-wielding in what is one of the most enjoyable games I’ve played this year.

Developer Crystal Dynamics has handled Lara’s foray into the isometric realm beautifully. Using the dual analog sticks to move (left) and aim (right) allows for elusive movements and strafing with “X” executing a roll for quick escapes. The functions needed for solving puzzles are smartly mapped to the bumpers, allowing your hands to concentrate on the sticks, triggers and face buttons during combat — plus, you can assign up to four weapons to the d-pad for switching on the fly. Jumping can be a bit imprecise, though part of the blame for that falls on the camera angle.

This is easily one of the best looking games on Xbox Live Arcade to date. The environments are meticulously constructed with accessible areas visible far in advance of reaching them. That visual clarity is so important because it’s a fairly dark game, yet you’ll never have difficulty making out enemies, objects to be picked up or what places can (or cannot) be reached. Lara and Totec, AKA The Guardian of Light, look very fluid as well as they spring around, clamber up ancient ruins and unleash tremendous hails of weapon fire.

One area where I did run into issues were with destructible objects as there are times where an item will be destroyed as part of a sequence — such as a bridge collapsing behind you — but will still read as being somewhat solid. This leads to objects floating in mid-air or even Lara/Totec clinging to nothing. They don’t affect gameplay, but they’re worth noting.

There are just three speaking parts in Lara Croft: GoL and while the voice acting itself is fine, the dialogue itself won’t be earning consideration at the next Writer’s Guild Awards. The music serves as a nice accompaniment to the mood on screen, and the sound effects are strong as well.

The story in Lara Croft: GoL is about as deep as a Tomb Raider mad-lib. Lara is treasure hunting in an exotic location (South America) and locates a lost artifact (Mirror of Smoke), which is promptly taken from her by mercenaries that don’t comprehend its full destructive powers. From there a demon is unleashed (Xolotl) and it’s up to Lara and Totec, the long dormant protector of the artifact, to join forces and save the world. It’s pretty standard fare.

As it turns out, however, a cookie cutter story is the strongest criticism I can level against the game as it is masterfully constructed and an absolute blast to play. You have the option to play alone, but this was meant to be played with a partner. I sunk north of ten couch co-op hours into Lara Croft: GoL over the weekend and was consistently delighted. It’s just a great mix of puzzles and combat with more than enough content to encourage numerous trips through each level.

The game contains 14 levels in all, though a handful of them consist of a single boss fight, and should take you around six hours to complete depending on how much exploration you want to do. Each level has numerous secondary goals, point tiers and challenge tombs, all of which help you to acquire new weapons, artifacts and relics. For example, you may be asked to finish a sequence without taking damage or destroy a series of objects. Add to that ten hidden skulls on most levels and speed run challenges and there’s just a ton to do.

In addition to beefing up your arsenal with new weapons, the artifacts you find can be equipped to boost your attributes — early on it’ll be a trade off (plus-1 speed, minus-1 weapon), but more powerful ones found later in the game will bump all four categories. The combination of stronger guns and stat increases will definitely have you feeling like a much stronger character.

Puzzle solving is also a major part of the fun and, although there are no truly mind bending puzzles, they do become more elaborate as you progress. Most hinge on you and your partner’s ability to use their unique skills to progress. Lara is equipped with a grapple gun, allowing her to run across walls or create a tight rope for Totec to cross. Conversely, Totec can throw spears into the wall, which Lara can use as steps, or put his shield over his head for Lara to leap from. It’s a lot of fun to mix and match these skills when searching the levels for hidden items.

Single-player mode is surprisingly different from co-op as Crystal Dynamics elected not to saddle you with a cumbersome A.I. partner. Instead, Totec simply advances through the level alone, leaving Lara to face modified versions of the co-op puzzles. It’s a bit easier and less rewarding, but anti-social gamers should still enjoy the ride.

One thing worth mentioning is that online co-op will not available at launch, and instead is being added as a free patch when the game launches on the Playstation Network on September 28.

Microsoft knew what it was doing when it selected this to close the Summer of Arcade. Lara Croft and the Guardian of Light is everything a great Arcade game should be — it looks wonderful, has superb gameplay mechanics and packs levels with multiple goals, challenges and tons of items to collect.

By HC Green
This entry was posted on Tuesday, August 17th, 2010 at 8:36 pm and is filed under Herija Green, Video Game Reviews. You can follow any responses to this entry through the RSS 2.0 feed. You can skip to the end and leave a response. Pinging is currently not allowed.