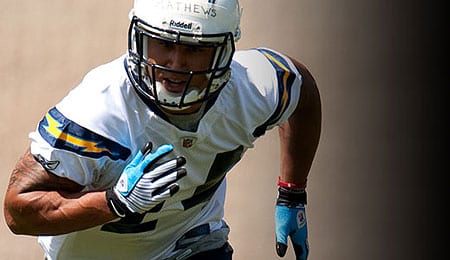 If you’re scouring for rooks that will be Fantasy worthy, look no further than Ryan Mathews.

The 2010 RotoRob NFL Draft Kit kicks off today. We’ll be offering up cheat sheets at every position, as well as rookies, busts and sleeper picks. While you’re wondering how much the Patriots have left, let’s take a look at the Top 10 rookies you need to consider on Draft Day.

The NFL draft has become an event unto itself, and what was once called the Annual Player Selection Meeting now plays out across the television sets of football-starved fans everywhere, introducing us to the players that could become the NFL’s Next Big Thing. Hyperbole flows like champagne as each player is accorded the full analytical breakdown, and  Fantasy football owners salivate at the thought of drafting this beast of a man to carry their team’s fortunes in the upcoming season — which now can’t get here soon enough.

Steady it up there, Sparky — not all of those college studs will perpetuate his football fortunes at the professional level, and very few will become worthy Fantasy additions in their first year in the league. The 2010 draft class does contain a few players worthy of your draft day attention, though, and we have profiled them here.

Please note that while we have featured at least one rookie at each skill position, it’s important to keep these general guidelines in mind before pulling the trigger on that first-year man who looked so good back in April.

Rookie quarterbacks receive most of the hype, but the adjustment to the pro game generally takes its toll on the former Big Men on Campus. Compounding the problem is the fact that the cream of the crop are often drafted by the bottom of the barrel, and the substandard supporting cast doesn’t allow the young signal-caller to properly spread his wings and fly. If you’re in a redraft league, think twice – nay, think three or four times – before pulling the trigger on that rookie quarterback.

Like quarterbacks, rookie tight ends and wide receivers not named Randy Moss tend to struggle with the press coverage and general physicality so prevalent among NFL cornerbacks. It’s a well-known Fantasy axiom that wide receivers tend to blossom in their third year, and while that’s not always the case, it is a virtual certainty that a rookie receiver will not live up to his potential his first year in the league.

Rookie running backs, on the other hand, frequently make a huge splash in the Fantasy pool – so if you’re looking to reap some big benefits, look no farther than the men who tote the rock. Much the same can be said for rookie defenders, who can post Fantasy starter-worthy numbers right from the get-go…assuming they land in a favourable situation, of course.
Let’s have a look at 11 players who could make a big impact on the Fantasy football landscape in 2010 – and beyond.

1. Ryan Mathews, RB, San Diego Chargers: The Chargers are counting on Mathews to revive a running game that finished next-to-last in the league a season ago, and he looks ready to fill that bill. Mathews is a 220-pound north/south runner who rushed for over 1,800 yards and scored 19 touchdowns last year for Fresno State. His cutback style and excellent balance should make him a great fit in San Diego’s offense, and the Bolts figure to give him the rock early and often in 2010. He’s not much of a receiver, but Mathews’s combination of talent and opportunity makes him the no-brainer pick as this year’s top Fantasy football rookie.

2. Dez Bryant, WR, Dallas Cowboys: Bryant (like every other Cowboy) was probably over-hyped as he first got off to a strong start in training camp, then ignited the blogosphere by refusing to carry Roy Williams’s pads as part of his rookie indoctrination. We don’t blame Dez for that tiny transgression – it’s our view that Roy-Will needs plenty of practice holding onto things. Bryant’s recent high ankle sprain will suppress his draft day value a bit, and probably will delay the breakout numbers many see coming in 2010. He’s No. 2 on our list, but doubts surrounding his problematic ankle temper our enthusiasm for the talented wideout – at least for his first few games.

3. Montario Hardesty, RB, Cleveland Browns: Incumbent starter Jerome Harrison is more scatback than workhorse, and keep in mind that 561 of his 862 rushing yards last season came during the final three weeks of the campaign – AKA “Garbage Time.” It’s also noteworthy that he averaged less than four yards per carry in two of those contests. Enter Hardesty, a 225-pound banger who rushed for 1,345 yards and 13 touchdowns for the Tennessee Vol last season. The Browns figure to be a run-first (and probably run-second, third and fourth) team in 2010, and Hardesty could emerge as the team’s feature back. His injury history is a bit concerning, and the fact that he has already twisted his knee in pre-camp drills is cause for pause. He should be ready by late August, though, and we think he has a chance to be a solid RB3 in 2010.

4. Ben Tate, RB, Houston Texans: Former starter Steve Slaton fumbled his way into the Chateau Bow-Wow, underwent neck surgery during the offseason and lacks the size to be an NFL feature back. Enter Tate, a 220-pounder who rushed for 1,362 yards and ten touchdowns for Auburn last season. He is a no-nonsense, north/south runner who should receive every opportunity to become the Texans’s top ball carrier in 2010. He’s not much of a pass catcher (that’s Slaton’s forte), and Arian Foster is still ahead of him on the depth chart, but Tate could rack up some nice numbers this season in Houston’s explosive offense.

5. C.J. Spiller, RB, Buffalo Bills: Spiller is a first-rate playmaker who should inject some excitement in Buffalo’s boring, ground-tapping (it’s not good enough to be “pounding”) attack. What he’s not is big or physical enough to be an every-down back in the NFL. Even so, the Bills figure to get the ball into C.J.’s mitts 15 times per game or thereabouts — possibly including him in the return game, where he has the talent to become one of the game’s best. We still reckon Fred Jackson will see most of the touches for the Bills, with Marshawn Lynch also playing a minor role. Spiller’s acumen as a receiver should bump him up your board in PPR formats, and if he becomes a return man he’s pure gold in Fantasy leagues that count return yards.

6. Mike Williams, WR, Tampa Bay Buccaneers: If you don’t know the name, you’d better make the acquaintance of Mr. Williams, who has already grabbed the starting split end job in Tampa Bay. He is a big, fast wideout that can stretch the defense, and he still has the hops to out-leap defensive backs for those end zone “jump balls.” He dropped to the fourth round in this year’s draft after a series of off-field problems culminated in his leaving the Syracuse football team late last season. Williams’s skills are undeniable, though, and if Tampa Bay head coach Raheem Morris can keep the youngster’s head on straight, his ceiling is just about unlimited. Williams has both the ability and the opportunity for stardom, and it would not be shocking to see him finish the year as the game’s top rookie wideout.

7. Jahvid Best, RB, Detroit Lions: Like Spiller, Best lacks the size to be an NFL feature back, but he is quick as a hiccup and a fine pass receiver. With former starter Kevin Smith’s health a big question mark, the Lions figure to feed Best the football in a variety of ways – and when the former Cal Golden Bear has the ball in space, he’s a threat to visit The House. To the downside, Best has a rather extensive injury history of his own, so it would be very surprising to see him subjected to anything close to a full-time workload this season. He should be a fine No. 3 Fantasy back or flex play in most PPR leagues this season, and the upside for more is there — especially if Smith’s injury woes return.

8. Sam Bradford, QB, St. Louis Rams: Rookie quarterbacks typically take their lumps early in their careers, and Bradford should be no exception. His O-line is suspect, his feature back has a creaky back and his receivers aren’t well known outside their respective hometowns. Be still my heart. Bradford is probably worth drafting as a Fantasy backup in deeper or two-quarterback leagues, but he’s mainly a target for dynasty league owners. Keep an eye on him as the season unfolds; the Rams figure to stink like zoo dirt again in 2010, and should end up playing from behind a lot. That can sometimes be Fantasy gold for a gunslinger like Bradford. We don’t anticipate a long “watch and learn” period with the Ram rookie — and besides, we’d rather he didn’t learn what A.J. Feeley has to teach.

9. Jermaine Gresham, TE, Cincinnati Bengals: Gresham is flying under the radar in Cincy — which is easy enough to do when your team’s starting wideouts are the NFL version of Paris and Nicole. A knee injury cost the 261-pounder his senior season, but the 66-950-14 line he posted as a junior at Oklahoma convinced the Bengals to make him the 21st overall pick in the 2010 draft. Gresham is an athletically gifted receiver that has all of the tools necessary for NFL success, and he could become Carson Palmer’s go-to guy when the Kardashian sisters…errr…Tee-Oh and Cee-Oh are covered…which happens a lot more than either of them care to admit. The youngster has been slow to pick up the offense in the early going, and probably shouldn’t be drafted in any but the deepest of Fantasy leagues. Dynasty leaguers, though, should be all over this guy – and he could become a spot starter in deeper formats during the latter part of the 2010 campaign.

10. Rolando McClain, MLB, Oakland Raiders and Eric Berry, S, Kansas City Chiefs: All right, IDP fans, this duo’s for you. McClain looks to be on track to step in at the mike for the Silver and Black — a position that produced 268 total tackles over the past two seasons for the departed Kirk Morrison. McClain is bigger than Morrison, and his intensity and playmaking skills should make him a star for years to come. Berry, meanwhile, should step in as Kansas City’s starting strong safety and wreak havoc from that Fantasy-friendly position. The 210-pounder totaled 241 tackles and 14 picks during his three-year career at Tennessee, and should be a fixture in NFL secondaries (and Fantasy lineups) for the next decade.

By Buck Davidson
Tags: 2010 NFL Draft Kit
This entry was posted on Friday, August 13th, 2010 at 2:00 pm and is filed under 2010 RotoRob NFL Draft Kit, Buck Davidson, Cheat sheets, FOOTBALL, Rookies. You can follow any responses to this entry through the RSS 2.0 feed. Both comments and pings are currently closed.