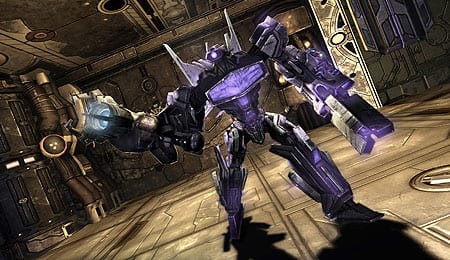 Even though he doesn’t turn into a giant gun, Shockwave is still bad ass.

A couple months back, High Moon Studios accomplished the seemingly impossible, creating an excellent video game based on the Transformers universe with Transformers: War for Cybertron. Now High Moon is back and looking to extend the game’s online lifecycle with the first batch of downloadable content, aptly dubbed Map and Character Pack #1.

The new characters are selectable for the game’s Escalation mode, and as a G1 fan everyone except Demolisher (who wasn’t part of that series) is an exciting addition. Downloading the DLC unlocks each of their chassis for use during the game’s competitive multiplayer as well, allowing for more choices. Considering the price that the pre-order bonus skins were fetching on eBay, this alone may be enough to convince some to purchase the new content.

For those looking for more than just external enhancements, four new maps (detailed below) have also been included. However, like BioShock 2, no DLC-specific playlist has been created, meaning you’ll either need to host private matches or encounter the maps organically.

With so many unreachable heights in the various multiplayer maps, it’s refreshing to take your scientist class transformer skyward, perch atop the large piping and rain death down on your hapless foes. That’s not to say the map isn’t well balanced, however, as there’s plenty of cover to be found for ground-based classes as well as narrow passageways that are just begging for a little melee combat. The map’s bright visuals also help make it stand out.

A two-tiered central gathering point serves as the primary spot for hostilities to break out. The wide open spaces found there are in stark contrast to the rest of the map, which favours enclosed hallways ideal for close quarters fighting. A river of Energon flows underneath the structure, and while it can cause damage, you’d have to go out of your way to be wounded by it.

The Decepticons are confined to a small space when the map starts, but you can open it up considerably by unlocking the level’s numerous doors. There are also a couple of sentries available for activation, one an Ion turret and the other a healing ray, which helps differentiate it from the game’s other locations. It may not feel as unique as Forsaken, but it’s a very cool addition nonetheless.

This one casts you in the role of an Autobot defending against waves of Decepticons. It’s considerably different than the other locations offered in this mode, featuring some very tight corridors and a large section completely flooded with Energon. That gives the advantage to the Autobots that transform into jets as they can fly over it quickly while leaving pursuing ground units in the dust — as the waves get tougher be prepared for a lot of hit and run tactics.

If you’re a fan of Escalation, the Map and Character Pack #1 is a fantastic addition. It doubles the number of available locations and provides the opportunity to use alternate strategies while defending against the never ending waves of enemies. If you stick to competitive multiplayer the value is diminished, but the two new adversarial maps and combat chassis still breathe some new life in Cyberton’s online war.