Is Josh Tomlin for Real? 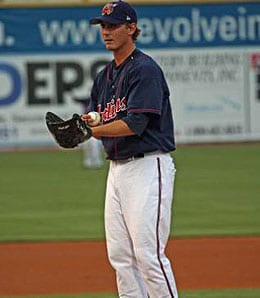 Seemingly out of nowhere, Josh Tomlin has become a fixture in the Indian rotation.

The Cleveland Indians continue to hold their own lately, and have suddenly pulled into fourth place in the AL Central, just 6.5 games behind the reeling Tigers. Okay, so they put themselves in too big a hole in the first half for this season to matter, but third place in the Central doesn’t seem so outlandish now, and that’s something to be excited about if you’re unfortunate enough to be a fan of the Tribe.

One other thing worth getting excited about in Cleveland is the emergence of rookie hurler Josh Tomlin. The 25-year-old righty has looked pretty sharp in his first three starts, and if not for a grand salami by Adrian Beltre on Thursday night, his ERA would be well under 2.00. Tomlin’s hit rates have been phenomenal, he hasn’t walked very many, and he’s managed to rack up a few Ks along the way.

This 2006 19th rounder has quietly put together an impressive minor league career, so this early success shouldn’t have come as a big of a surprise as it seems to. Still, the Indians threw him to the wolves, pitting him up against the Yankees for his big league debut, and if nerves were a factor, it sure didn’t show as he took a shutout into the eighth inning.

A control specialist (he had averaged just 1.7 BB/9 in his minor league career heading into this season), Tomlin racked up 14 wins at Double-A last year, while compiling a marvellous 125/27 K/BB ratio in 145 IP. Tomlin isn’t overpowering, generally throwing his fastball in the 90-91 mph range, but he has good lately movement on his cutter and gets by on his control. Desperate for long-term solutions, the Indians may have found someone here who is capable of handling a rotation spot for the long haul.

Go ahead and pick Tomlin up in AL-only leagues, although note that his next start Wednesday at home against the Orioles isn’t as easy as it sounds – Baltimore is currently the hottest hitting team in the AL.

While we’re discussing the Indians, how about a tip of the hat to Kenny Lofton, who will be inducted into the team’s Hall of Fame Saturday? In three separate stints with the Indians, he managed to set the franchise record for steals and racked up the third highest total of runs in team history. Back in the day, as many of you may remember, Lofton was one of the best lead-off men in the game, probably surpassed only by Rickey Henderson in his era.

By RotoRob
This entry was posted on Saturday, August 7th, 2010 at 12:30 pm and is filed under BASEBALL, RotoRob. You can follow any responses to this entry through the RSS 2.0 feed. You can leave a response, or trackback from your own site.