Has George Steinbrenner Rolled Over in his Grave? 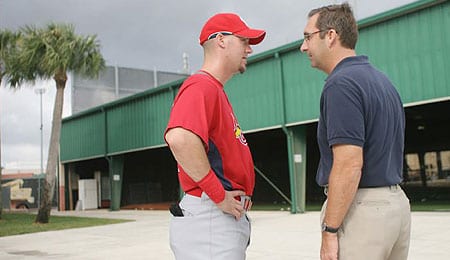 Now that Ryan Ludwick (left) has been dealt to the Pads, the outfield crunch has eased in St. Louis.

So, you think Joe Girardi is in the hot seat now that the Rays have passed his Yankees? Oh, that’s right…the Boss has shed his mortal coil. Never mind.

Now that Ryan Ludwick has been dispatched to the West Coast, it not only opens the door for the scorching Jon Jay, but it also means that Colby Rasmus won’t be sitting as often. Rasmus scuffled in July, and saw his PT dwindle a bit as a result, and there’s a chance in more shallow leagues that he was even dumped. If that’s the case in your league, pick him up pronto.

On Tuesday – even though the Cards were hammered by the suddenly scorching Astros –Rasmus smoked another three hits, including his second long ball in four games, and he’s now hit safely in six of his last seven games. He is quietly putting together a very strong sophomore effort, having already surpassed his rookie home run total, and closing in on a new career high in doubles as well. Throw in the double-digits in steals and a decent BA, and you’ve got yourself a player that is now a must-own Fantasy asset.

We expected Rasmus to be a top 60 outfielder this year, but he’s vastly exceeded those expectations, playing at close to top 30 levels. Rasmus, who won’t be 24 for another week and change, is obviously a superb keeper asset, but in year two, he’s proven to be a pretty darn good redraft league asset as well. The most exciting part of Rasmus’s development has been his improvement against lefties. The left-handed hitting youngster struggled against southpaws as a rookie (.160), but he’s having no problems this year (.270). Any fears owners had that Rasmus would be platooned can be tossed aside.

Still with the Cards, who have been spinning their wheels of late, if you’re one of those NL-only league owners that’s still keeping Jason Motte on your roster, you may want to send him packing now. He came up lame after Monday’s ugly outing (1 IP, 1 H, 2 ER, 2 BB) and had to have his shoulder looked at by team doctors on Tueday. Uh oh. Apparently, everything was fine (it was just discomfort) and he may be available to pitch as soon as Wednesday, but do you really need another sign that it’s time to look elsewhere? It’s not as if Motte has had a bad year – although he’s clearly not been quite as valuable as we anticipated when we ranked him as a top 45 reliever in the preseason — but as long as he remains one of those relievers who averages less than an inning per outing, the counting stats will be restricted. And he doesn’t record enough wins, holds or saves to be of great use. If you’re going to sacrifice the Ks in a low-inning set-up man in your NL-only league, you may as well bag one that’s getting you holds, like Arthur Rhodes. Better yet, grab someone that’s getting holds, wins and strikeouts and has the potential to earn saves down the stretch, like Tyler Clippard.

While we’re discussing the St. Louis bullpen, which has been solid (although not as good as the team’s rotation), one reliever we sold a bit shot in our rankings is Kyle McClellan. The dude’s on a roll, having given up just one run in his last 13 appearances to shave his already excellent 2.50 ERA down to 1.94. McClellan has been touched up for five homers, but he’s made up for that with a WHIP of 1.00 and a team-leading 15 holds – already matching last season’s total. He’s starting to get a bit of traction in NL-only leagues, but not enough considering that if closer Ryan Franklin ever falters or gets hurt, smart money’s on McClellan taking over the save duties.

The humiliation that Houston laid on the Cards that I alluded to before included 18 runs and 22 hits as the retooled Astros cruised a seventh straight win. Now that Lance Berkman is gone, Houston needs another three-hole hitter. Jeff Keppinger of all people got the call in the first three games, and he was up for the challenge, going 6-for-11 with a run, two RBI, a walk and a homer. And then Hunter Pence – a more likely candidate for the long-term three-spot – took over.

Pence was 2-for-5 with two runs and an RBI on Monday (while Keppinger had two hits and four RBI out of the five hole), but Tuesday, Pence only managed a 1-for-5 showing (although he did drive in a pair of runs), despite Houston’s offensive explosion. In our view, Pence was a top 30 outfielder entering the season, and he’s definitely met our projections, perhaps even exceeded them slightly.

Best of all, the loss of Berkman doesn’t seem to have hurt Pence – he’s hit in 10 straight games now, continuing into August what was a very strong July (four homers, 15 RBI, .312 BA, 844 OPS). One of the more durable players in the game in the last three years, Pence has a decent chance to put up a third straight 25-homer season and he’s shown nice improvement on the basepaths, currently sitting just one steal shy of matching the career high he set last year. Pence will likely be a 20-20 man for the first time in his career and if he continues his current batting hot streak, will probably surpass his BA from last season in the process. This 27-year-old has become a consistent performer, and while there’s nothing dominating about his game, Pence is just a solid across-the-board contributor and that’s something that’s quite valuable for Fantasy owners.

Back in St. Louis, how about Jeff Suppan’s 5 1/3 shutout frames Saturday for his first win since September 19? Now, in fairness, Suppan’s 4.14 ERA since joining the Cardinals once again proves what a genius Dave Duncan is (remember that Suppan had a 7.84 mark before Milwaukee finally said “seeya”), but let’s get real: Suppan is still miles from Fantasy relevance. And when we say miles, we’re not talking about Aaron Miles…we mean galaxies.

By RotoRob
This entry was posted on Wednesday, August 4th, 2010 at 11:59 am and is filed under BASEBALL, RotoRob. You can follow any responses to this entry through the RSS 2.0 feed. You can leave a response, or trackback from your own site.