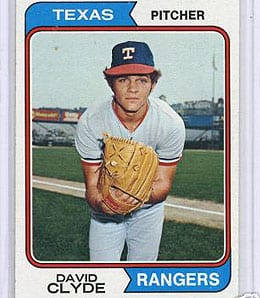 Once upon a time, David Clyde was all that.

Isn’t it scary that Stephen Strasburg is most often compared to David Clyde, the pitcher the Texas Rangers took first overall way back in 1973? While Strasburg was a mind-bending 13-1, 1.32 at San Diego State, check out what Clyde did in his final year of high school: 18-0 with 14 shutouts and five no-hitters. Just saying…

Nick Swisher has never hit higher than .262 in his big league career, but a .374 May has him up to .310 through almost two and a half months. Better yet, he hasn’t really sacrificed any power to achieve this. God damn, I hate the Yankees…as if they needed another .300 hitter. Last night, they continued to feast on the Orioles, beating Baltimore for a tenth straight time to move three games ahead of the Red Sox.

Speaking of the Red Sox, the AL’s top scoring team that somehow got shut down by the lowly Indians, how does Kevin Youkilis just keep getting better every season? He’s hitting .455 in June to take his season average up to .320. Now check out his year-by-year OPS: 780, 805, 810, 843, 959, 961 and 1061 this season. Getting better into your 30s is an impressive feat and while he broke into the bigs too late to put up really impressive career numbers, Youk can simply rake and is an absolute Fantasy stud.

Speaking of lowly, the Pirates continue to scuffle, especially their pitching, although their bullpen has been somewhat better than their awful rotation. One reliever who isn’t helping, however, is Brendan Donnelly, who actually looked really sharp for the Marlins last season, but he’s getting roughed up this year. More walks than strikeouts is never a good sign, especially for a pitcher that’s career ratio is almost 2.5. He’ll be 39 next month, and I think it’s about time for Donnelly to be set adrift on an ice floe.

In Washington, less than half as many people were at the Nats’ game a night after Strasburg’s debut, but Adam Dunn went yard for the second straight game to lead his team to victory. He hit a career-best .267 in his first season in Washington, and this year Dunn is at .280 while continuing to show 30+ HR power. The Nats, meanwhile, continue to hang around, sitting five games back of the NL-East leading Braves.

The Jays have now lost nine straight series against the Rays and have suddenly fallen 4.5 games behind the second-place Yankees in the AL East. Aaron Hill, one of our pre-season flop picks, took a third straight 0-fer to drop to .180. The scary thing is, Hill’s .185 mark in June makes this his best month of the season so far. Yikes. Fantasy owners could swallow this a lot easier if the dude were anywhere near the pace that allowed him to slug 36 dingers last season, but he’ll likely fall well short of that in 2010.

Tampa Bay’s offense has kicked it up a notch, scoring at least nine runs for the third straight time for the first time since August 29-31, 2008. With their win over the Jays last night, the Rays have now built a five-game bulge over third-place Boston and B.J. Upton owners have to pleased with how he’s responded to spending the majority of the time at the top of the Ray lineup since Jason Bartlett got hurt. He recorded a third straight multi-hit game Wednesday, swiping bases in two of those tilts, and scoring seven runs over this stretch. After a seriously forgettable May, Upton is scorching so far in June, and he’s actually managed to stay healthy so far this year. Bartlett’s injury isn’t serious, but Upton owners have to be praying that Bartlett experiences a setback as their man B.J. is on pace for over 110 runs, pretty impressive considering he’s yet to even have a 90-run season.

Seattle continues to struggle offensively and is now nine games off the pace in the AL West. Of course, a 2-7 mark against division leading Texas sure isn’t helping. Additionally, keeping players like Matt Tuiasosopo on the roster is also hindering the wet-noodle Mariner offense. Simply put, there’s nothing even so-so about Tuiasosopo. Although he actually drew a pair of walks Wednesday – his first free passes in almost a month – he took another 0-fer to drop to .170. While Tuiasosopo was enjoying a fine season at Triple-A and, having just turned 24 a month ago, has great upside potential, he’s not helping himself in his limited PT opportunities in Seattle right now. Send the kid down so he can play every day in the minors.

The blowout of the Mariners Wednesday marked Texas’ most lopsided victory of the season, as they’ve opened up a two-game lead over third place Oakland in a very tight AL West race. One guy I’ve been watching is Craig Gentry, who has kind of snuck up in the Ranger system as a player with top-of-the-order potential. He got into 11 games with Texas last year, failing to distinguish himself. This year, Gentry is seeing more action, and showing some potential. Texas has a deep lineup, so there’s no room for him right now, but keep in mind that this lineup is also littered with injury prone players, so Gentry is someone who could be a bigger factor than we expect in the second half. If an injury opens the door for serious PT for him, he’d be worth the gamble.

Milwaukee continues to crumble like grandma’s cookies, and now finds itself three games behind the third place Cubs in the NL Central and – more disturbingly – just a half-game ahead of the fifth place Astros. Thankfully, the Brewers finally bit the bullet and ate Jeff Suppan’s salary, and to take his place they’ve brought up Chris Smith, who was closing at Triple-A. Smith is no longer a kid, but he showed some promise with Milwaukee last season, and given their bullpen situation, anyone with a pulse who can get people out has a chance to emerge with value. Watch how this plays out.

By RotoRob
This entry was posted on Thursday, June 10th, 2010 at 11:03 am and is filed under BASEBALL, MLB Today, RotoRob. You can follow any responses to this entry through the RSS 2.0 feed. You can leave a response, or trackback from your own site.