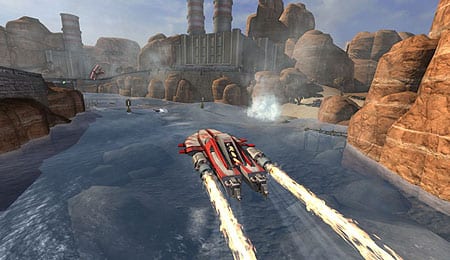 The prospect of running the perfect race is downright addicting.

After kicking off the Summer of Arcade with the critically acclaimed Limbo, Microsoft is following up with a much truer arcade experience in Hydro Thunder Hurricane, the latest installment in the long-running powerboat racing series first seen by console gamers on the Dreamcast back in 1999.

Fast-paced arcade racers are always best served keeping things uncomplicated and Hydro Thunder Hurricane ably follows suit. Accelerating and braking are mapped to the triggers while boosting (A) and boost jumping (X) are on the face buttons. It all lays out well; though there are times you’ll wish you could manually control the camera via the right analog stick.

Bright and colourful, Hydro Thunder Hurricane does a great job of matching the boats’ frenetic pace by launching a near constant barrage of scripted events, many of which affect gameplay. Dinosaurs breach and crash back in the water, icebergs tumble down around you and planes drop explosives in your path, all of which cause the waves to become more turbulent. There’s also plenty of stuff going on above and around you to maintain that frantic feeling.

The game’s eight levels feel markedly different from one another as well, with tropical paradises, dark icy waters and cityscapes all represented. There aren’t a huge number of boats to choose from, but they all manage to look unique while falling in line with the game’s overriding theme of being over-the-top with the number of engines and wild designs.

Anyone that’s played arcade racers will instantly recognize the standard issue musical score that always seems to accompany the genre, and odds are you’ll be following the on-screen action far too intensely to even notice it. The sound effects are fine while the announcer (or is he in your pit crew?) becomes tiresome by repeating his handful of lines in the same spots.

There are no weapons on your boat and efforts to ram or dislodge an opponent are almost always futile, which makes Hydro Thunder Hurricane purely about speed and your ability to successfully navigate the level so that you pick up enough boost fuel to maintain your pace. Yes, it’s simplistic, but that plays into the throwback nature of the game. Developer Vector Unit wasn’t trying to revolutionize the genre here, instead focusing on what has made these games successful: instant accessibility.

You aren’t offered that same access to the various modes and tracks, however, with nearly everything beyond the bear minimums locked when you first fire it up. The game’s race mode, which contains eight tracks, offers you the chance to compete against 15 A.I. boats on one level only. From there you’ll need to earn points by finishing in the top three to unlock additional boats, levels and challenges. It’s actually quick and easy to earn points but rewarding nevertheless.

The races themselves are varied and well designed with plenty of content packed into each one such as the scripted events noted in the graphical section, which can produce massive waves that send your boat crashing into walls, and plenty of shortcuts just waiting to be discovered in the never-ending quest to shave those precious few seconds off your time. Beyond the variety in appearance there’s also a blend of lap and point-to-point races to keep things varied. None of the races ever feel like they’re dragging, which itself is an accomplishment.

Outside of the primary races you’ll also run the tracks solo in a pair of time attack modes. One has you maneuvering through a series of rings — miss a ring, incur a time penalty — while the other drops a bunch of explosive barrels in the water and challenges you to avoid them. There are 24 ring master and eight gauntlet events in all, and they serve as a nice alternative to racing against the computer.

In fact, the ring master races may rate as the truest test of skill as there are no A.I. boats there to add seconds to your run. It’s all about who’s able to race through the rings the fastest with three different runs on each level. As the difficulty increases the rings shrink in size and the route changes, guiding you to alternate paths and shortcuts you may not have discovered yet. Things get pretty harrowing on the Expert difficulty, though, so be prepared for plenty of trial and error.

Of course, much of Hydro Thunder Hurricane’s appeal is found in the multiplayer. It supports up to four players locally via split screen (eight online) and even allows your entire group to venture into cyberspace together to take on other gamers. It’s a cool option that not enough games embrace and underscores how much the developers were aiming for this to be a communal game. The online races move briskly without noticeable lag and a persistent leaderboard always keeps you informed of which friends are above you needing to be passed. Racing against your buddies or trying to topple each other for best track times is a blast and surprisingly addictive.

When they announced the five Summer of Arcade titles I thought this one had the most potential to fall flat — I was wrong. There’s a lot of content packed in here, and whether you’re trying to improve your standing on the leaderboard, searching for hidden items or racing against friends Hydro Thunder Hurricane is simply a lot of fun to play.