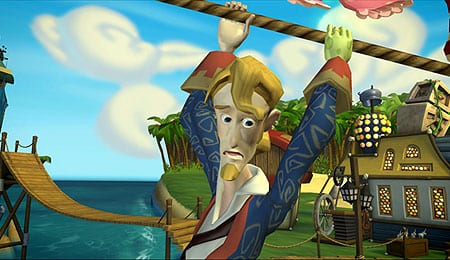 Guybrush Threepwood hasn’t learned a damn thing in his ten years away — and we’re happy with that!

Monkeys. Pirates. Grog. Insults. If any of those make you think of a hapless wannabe pirate with a ridiculous name, then chances are you grew up on The Secret of Monkey Island back in the heyday of PC adventure gaming. Guybrush Threepwood, Mighty Pirate (TM) last starred in Escape From Monkey Island a decade ago, and that game had a reasonably successful PS2 port. Now there’s a bit of an adventure game resurgence as classic Monkey Island games are getting special editions, and Tell Tale Games is heading up episodic content of old LucasArts favourites.

Tales Of Monkey Island first came out several months ago for the PC and Wii, but now it’s getting the full high-definition treatment on the XBox 360 and PS3. Has much changed for Guybrush Threepwood and company? Yes and no; the spirit of the series remains the same, but some technical issues lower the quality of the experience just a tad.

The old Monkey Island games came from the days of cursor-based adventure gaming. That doesn’t really translate to consoles; it didn’t work that well for the PS2 version of Escape From Monkey Island, though it fares better here. The analog stick is used to move Guybrush around, though the collision detection can be iffy and you’ll find yourself getting caught on invisible corners or unable to turn around cleanly in a seemingly clear area. Fortunately, Tell Tale has included a button to cycle through the accessible objects on the screen. This helps a lot, as you’ll try to point Guybrush in the right direction and the game sometimes just won’t highlight the item you want.

In adventure games, inventory items were made to be combined, and that was always easier done with mouse-based inventory management. Since this is a console experience, Tell Tale has managed the best that it could; one button opens up the inventory menu, then you highlight the item to be used. This goes into a sub-menu that allows it to be combined with another object in your inventory or in the active game. It sounds clunky, but there’s no real way around it. PC-style inventory management simply doesn’t work smoothly on a console environment, though Tell Tale has done its best to try to make it streamlined and accessible.

Tales Of Monkey Island looks like it could be a PS2 game. That’s no insult to the developers, as they don’t have the budget of a God Of War team. The game was released across platforms and caters to a specific demographic that would play an adventure game on DOS if it was well written and fun, so the graphics are on par with expectations. They’re a step up from Escape From Monkey Island and serviceable for their purposes, but definitely nothing to write home about.

Voice acting, however, is very critical to an adventure game. Poor voice acting can make adventure games too painful to play. Fortunately, the Tell Tale team has stuck with what works: Dominic Armato as the clueless-but-plucky Guybrush Threepwood and a cast of returning characters, such as Alexandra Boyd as Elaine (Guybrush’s ever-patient wife) and Earl Boen as LeChuck (Guybrush’s rival and ghost-pirate extraordinaire). Other characters return, but I won’t spoil long-time fans with a list. I’ll just say that you’ll be very pleasantly surprised.

All of the music plays off the original themes and styles established by The Secret Of Monkey Island way back in the DOS days. There’s a Caribbean vibe through the whole thing, though it can take a modern swing when the setting calls for it. You might even find yourself humming the familiar Monkey Island theme song after a few days of playing this.

Let’s face it: adventure games have never been about the graphics or the controls — it’s all about the puzzles and the story. That’s why old LucasArts and Sierra games are still fun to play (seriously, if you’ve never played Indiana Jones And The Fate Of Atlantis, get thee to a DOS emulator now), and Tales Of Monkey Island doesn’t disappoint here. The game opens at the end of a cliffhanger, with Elaine captured by LeChuck, and Guybrush dashing to her rescue. The developers joked that it’s the ending of the never-actually-made Monkey Island 5, and it’s a great place newcomers to figure out who these characters are.

From there…well, it goes on to a very Monkey Island experience. There’s pop-culture references, a wide range of goofy characters, so-bad-they’re-funny puns, and puzzles, plenty of puzzles to advance the plot. In their simplest form, adventure games are about solving puzzles to get to the next bit of story. How do you solve puzzles? Maybe you need to talk with someone in another town, or come up with a creative use for the nose-shaped pottery you stole, or drink the right type of grog to thicken your phlegm for a spitting contest (blatant Monkey Island 2 reference). A development team has done a successful job if the puzzles seem obtuse upon first glance, but have a logical solution in the end. For the most part, Tell Tale has done a solid job in this department, and the puzzles provide a sense of satisfaction without ever being too out in left field.

Longtime genre veterans will understand when I say you have to play adventure games for a little bit to really get in the proper frame of mind. Every item you pick up or interact with should get your mind running into “how else can I use this?” territory. For newcomers used to blasting space marines with a plasma rifle, this might be a drastic change of pace. Fortunately, Tell Tale has included a hint system, so you won’t have to go old school and buy a hint book with invisible ink like the good ol’ days.

“You fight like a dairy farmer!” If that phrase means anything to you, then your prayers have been answered. The biggest compliment I could pay Tales Of Monkey Island is that it could be ported over to the old LucasArts SCUMM engine and it’d be the same game. Outside of the control scheme and episodic distribution, not much has changed — and that’s a good thing. Tales Of Monkey Island is a Monkey Island game in the truest sense. It’s funny, engaging, creative, and occasionally frustrating, just like the other games. The only difference is that it comes with a somewhat clunky control scheme for console gaming. I’m ranking this a four out of five for casual gamers open to different experiences, but five out of five for anyone who ever loved old LucasArts and Sierra adventure games.

By Mike Chen
This entry was posted on Friday, July 9th, 2010 at 11:23 am and is filed under Mike Chen, Video Game Reviews. You can follow any responses to this entry through the RSS 2.0 feed. You can skip to the end and leave a response. Pinging is currently not allowed.