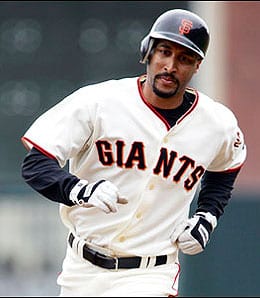 Former Giant Randy Winn is playing well for the Cards with Ryan Ludwick out.

Where has the Cardinal offense gone? They piled up 46 runs in their eight-game winning streak, but have been shut out in back-to-back games since then — the first time they’ve been blanked in consecutive games in a major league record 2,370 contests. Veteran Randy Winn walked in his only plate appearance and then swiped a bag and, based on his play lately, he deserves some consideration in NL-only leagues while Ryan Ludwick remains out. Winn is batting .296 with a couple of homers and a couple of steals this month in limited PT, and has really turned it on lately, batting .412 in the last week.

Well, so far, so good for the Phillies in the Greg Gross era. Hitting coach Milt Thompson got axed Thursday, and under new mentor Gross, the Phils and their revised batting lineup responded with six runs and a dozen hits – their best output in almost two weeks. Clean-up hitter Ryan Howard has been one of the few Phillie hitters who has continued to produce consistently. He only managed one hit Friday, but he scored one of the runs and drew a walk, while extending his current hitting streak to nine games.

After a slow start, RyHo has really stepped up the past couple of months, and he continues to improve as the season wears on. He’s been extremely durable, only missing three games in the past three seasons and continues to be an RBI machine. Unfortunately, Howard’s little speed spurt last season (if you want to call eight thefts a spurt) has gone by the wayside, but he continues to get on base at a nice clip and put up the power numbers. While approaching the 45 dingers he hit last year will be hard, I have no doubt that by season’s end the rest of his numbers will be right in line if not better than what he put up in 2009.

By RotoRob
This entry was posted on Saturday, July 24th, 2010 at 7:08 am and is filed under BASEBALL, MLB Today, RotoRob. You can follow any responses to this entry through the RSS 2.0 feed. You can skip to the end and leave a response. Pinging is currently not allowed.