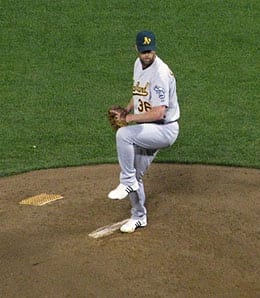 The Reds hope that old-timer Russ Springer has something left in the tank.

Okay, so the Reds don’t boast the best bullpen in the National League, but it’s not that bad, is it? News that the team has signed 41-year-old Russ Springer and 37-year-old Jason Isringhausen probably won’t send rival GMs scrambling for their phones to land relief help. Still, the added depth won’t hurt and with Carlos Fisher looking extremely sharp Thursday in his first outing since he was recalled from Triple-A, Cincy’s bullpen could get a nice boost in the coming weeks.

The Marlin offense isn’t exactly tearing the cover off the ball lately, yet Florida has won five of its last six games – including four one-run wins – to pull within a game and a half of the third-place Mets. Now, I don’t claim to have all the answers about how to fix Florida’s sagging attack, but here’s an idea – stop giving at-bats to Wes freaking Helms. It’s called addition by subtraction, Fish dudes. Look into it.

The general perception is that of the three big surprise Nl teams that are either leading their division or are knocking on the door (Atlanta, Cincinnati and San Diego), it is the Padres that are most likely to fall by the wayside down the stretch. Well, that theory bore itself out to a small extent this week as the Padres dropped two of three games against Atlanta, getting smacked around like a stepchild in the rubber match Thursday night. Getting strong top-of-the-order hitting has been a real Achilles’ heel for the Pads, as after Tony Gwynn, Jr. failed, they turned to another junior, this time Jerry Hairston and his whopping .312 OBP. Now, in fairness, Hairston Jr. has really kicked it up a notch this month, putting up a .316/.418/.421 line with a couple of dingers and a couple of steals. As a result, he’s recently been an attractive waiver wire option, and it’s hard to quibble with that. Consider Hairston a must-own NL-only asset and someone to consider in deeper mixed leagues.

By RotoRob
This entry was posted on Friday, July 23rd, 2010 at 1:58 pm and is filed under BASEBALL, RotoRob. You can follow any responses to this entry through the RSS 2.0 feed. You can leave a response, or trackback from your own site.