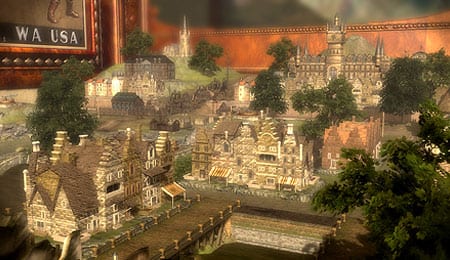 Despite controlling the French, surrender is not an option.

One of the most pleasant surprises on Xbox Live Arcade this year had to be Toy Soldiers, the hybrid strategy/shooter that allowed you to oversee the entire battlefield while also micro-managing each unit by assuming direct control. Now Signal Studios is back with some brand new DLC entitled The Kaiser’s Battle.

Released Wednesday at a cost of 400 MS Points (US$5), The Kaiser’s Battle contains:

Given the connection issues that seem to plague the online multiplayer, the added single-player levels will be the primary draw for most. The three new locations – Blucher-Yorck, Operation Gneisenau and The Last Offensive – are among the game’s best with a pair of large-scale maps mixed with another frontal nighttime assault.

Of that group, The Last Offensive really stands out for its size and cool visuals as well as the presence of the K-Wagen, which doesn’t meander about the battlefield like some other bosses and also has a little surprise up its sleeve. In fact, it feels like Signal Studios upped the difficulty with the French mini-campaign as they really throw a ton of different units at you, requiring you to rapidly upgrade, sell and replace tower placements.

As noted, you’ll also obtain a pair of new multiplayer maps (Georgette and Mountain of Reims) along with new achievements to add more value and further extend the life of Toy Soldiers’ new content.

If you enjoyed Toy Soldiers it seems nearly impossible that you wouldn’t like The Kaiser’s Battle. It’s loaded with the same signature charm and frantic action that made the full game so memorable and is well worth downloading.