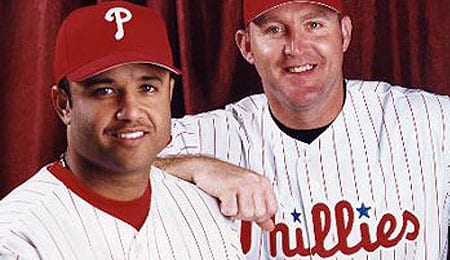 Placido Polanco, left, is enjoying a fine year for the Phils, but is hardly an adequate replacement for Dustin Pedoria.

Re: Any Roster Advice?

Anything glaring you see that needs to be met? I know I could improve my team, I’m just not sure how.

Any preference there, as I don’t imagine I can get much trade wise?

You are one of the many Fantasy players that got hurt badly by Boston’s West Coast follies this week. Losing Pedroia is going to hurt so I’d keep my eyes open for a 2B type, but would imagine it is probably very thin on the waiver wire at that slot. For the most part, I like your team. You have a good balance of speed and power on offense, but I do agree that your pitching could use a few tweaks.

Cahill is absolutely on fire right now so getting him rostered would be a priority. You’ve got the right two pitchers targeted to drop in Lilly and Cecil and several other pitchers that could be solid options are De La Rosa, Morrow and Erik Bedard. Morrow has a relatively tough schedule over the next several games, but the kid has been pitching exceptionally well over his past five starts and is really ramping up the strikeout numbers.

In short bursts, Bedard can provide value — especially in the strikeout department — and he looks just about ready to roll. His numbers from the past two partial seasons have been solid and if he’s healthy the potential is always there to see him moved at the trade deadline to a contender, something that would further increase his value. As a rule, pitching can be found on the wire, so it shouldn’t be tough to upgrade in that area. If you’re looking at the saves category keep an eye on Chris Perez and also on Evan Meek and the situation in Pittsburgh. The odds are very good we will see a change in the next month or so in both of those bullpens.

I need OPS, RBI and homers. I’m looking at Miguel Cabrera, Hanley Ramirez, Joey Votto and Evan Longoria. Am I aiming too high? I would need an add a bargaining chip with Jimenez, right? Possibilities on my team include Adam Lind, Marlon Byrd, Derrek Lee, Carlos Lee or Pablo Sandoval.

I like where you’re going with this trade, but unfortunately this year is one where at last count 20 starters an ERA of under 3.00. It is the year of the pitcher and with the wealth of quality talent the trade value on the top end isn’t what it normally would be. When Tim Hudson, Colby Lewis, Mat Latos, etc., are all late-round picks that are performing exceptionally well, and call ups like Stephen Strasburg are currently pitching lights out, the top tier guys don’t carry nearly the weight as, say, Tim Lincecum from 2009. I think to acquire a top-end bat you are going to have to offer up a bit more than just Ubaldo to get a deal done. On your list the one guy that I would target would be Votto. He’s an amazing talent that fills your needs and he should come at a bit better price than Hanley or Cabrera.

Of the guys that you have listed as potential add-ons in a deal scenario, Lind, Byrd and Derrek Lee would be my first choices to offer up. I think Carlos Lee still has some pop left in his bat and he’s been such a consistent HR and RBI guy for so many years I think come year end his numbers will be solid. What I would also attempt to do is get something of value back in a second player. Even a speculative pick on a potential closer in waiting such as Chris Perez, or bottom end type in Alfredo Simon might make this deal a bit more palatable, but either way I don’t think Ubaldo for one of the four stud bats you’re targeting is enough to get a deal done.

By Tim McLeod
This entry was posted on Thursday, July 1st, 2010 at 2:37 pm and is filed under BASEBALL, Dear RotoRob, Tim McLeod. You can follow any responses to this entry through the RSS 2.0 feed. You can skip to the end and leave a response. Pinging is currently not allowed.