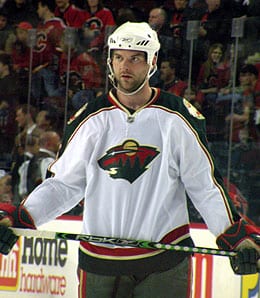 The Hawks have lost a lot of toughness, and the answer is…John Scott?

In the wake of a Stanley Cup victory and a Norris Trophy as the NHL’s top defenseman, Duncan Keith is essentially some kind of deity around the league – especially in the Windy City.

In fact, Keith is suddently so in demand that he will be the Grand Marshall of the LifeLock.com 400 NASCAR Sprint Cup Series race next weekend at Chicagoland Speedway.

You know the Chicago Blackhawks are a hot commodity when a sport that’s popularity dwarves that of ice hockey in the U.S. is trying to ride the wave of Blackhawk love.

By the way, how in the zone has Keith been this year? He’s the first player to ever win a Gold Medal, a Stanley Cup and a Norris Trophy in the same season. Like I said…he’s a demi-god now. It’s just a matter of time before a cult that’s raison d’etre is to worship the very ground that Keith walks on springs into existence.

Of course, the “big” news around the Hawks these days is that they just signed 6’8” John Scott to a two-year deal, a move that negates to a tiny extent the loss of grit and toughness since Adam Burish (free agency), Ben Eager and Dustin Byfuglien (traded to Atlanta) have all flown the Blackhawk coop in the last week and a half.

Scott, a 27-year-old defenseman who weighs in at a dainty 258 pounds, recorded 90 minutes in penalties in just 51 games with the Wild in 2009-10 – and he managed that despite averaging just 8:36 of ice time per game. I don’t know how much protection Scott can provide to Jonathan Toews, Patrick Kane et al., considering how sparsely he will likely play.

Of greater concern is that the Hawks have some serious holes to fill up front with the departure of those three players mentioned above, plus Kris Versteeg (traded to Toronto) and Andrew Ladd (traded to Atlanta in a separate deal). One player that’s expected to get a big opportunity to step up is youngster Jacob Dowell. He’s seen a sprinkling of action over the last three years with the Hawks, but has played in just four games with the big club since 2007-08. Clearly, the Hawks have some work to do this summer if they have any designs on repeating.

By RotoRob
This entry was posted on Saturday, July 3rd, 2010 at 2:21 pm and is filed under HOCKEY, RotoRob. You can follow any responses to this entry through the RSS 2.0 feed. You can skip to the end and leave a response. Pinging is currently not allowed.