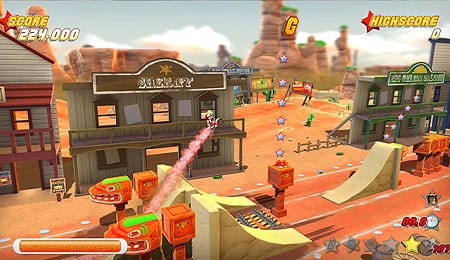 Trying to earn stars, pull off stunts and beat previous high scores give Joe Danger a ton of replay value.

The debut effort from newcomer Hello Games, Joe Danger is a hybrid stunt driving/racing/platforming title that has clearly drawn influences from all different genres. The result is a game that is a blast to play through and a bitch to master.

Although the game chooses to slowly introduce the various controls during the career mode, everything is so responsive and intuitive that it really isn’t necessary. After just a few games you’ll be pulling off back flips and waving to the crowd as you soar through the air. My lone quibble is that it feels a bit odd to switch from the throttle (R2) to the L1/R1 buttons to perform aerial stunts, but it’s something you’ll get used to as you play more.

Bright and decidedly cartoonish, Joe Danger is one of those games that is so overflowing with whimsy that even repeated failure can’t suck the fun out of it. I’d be ashamed to admit how many times I flew into the shark tank, and yet it still made me chuckle to see him dragged around Jaws style under the water before escaping…only to crotch himself on the pool and slide right back in. The animations are fluid, the backgrounds are charming and the tracks are well constructed.

There’s not a ton of music here, but what’s included fits the upbeat, happy nature of the game quite well. It also manages to not get old despite being fairly repetitive. Rounding out the presentation, the announcing voice is deliciously cheesy and the sound effects are great.

Cut from the same cloth as “Super” Dave Osborne, Joe Danger is a motorcycle stunt man that’s down on his luck after a bad accident, and it’s up to you to guide him back into the limelight. It won’t be an easy journey, however, as the game throws some truly difficult tracks your way and often asks you to complete multiple objectives within the same race. Completing these objectives will earn you stars, which you’ll then trade in on certain races to advance through the solo career.

It’s those numerous secondary goals that really help give this game some serious staying power as they can be downright brutal. I didn’t come close to completing them all during my rather lengthy jaunt through the career mode, but I had a hell of a lot of fun trying. There’s actually an impressive variety of goals to be found throughout Joe Danger, ranging from the straightforward (win the race) to the complex (beat the track time while landing on every target).

The levels are varied as well with many of them featuring more than one path. Some will have you hopping over speed bumps and ducking under hurdles, while others will have you flipping through the sky in what is essentially a form of platforming. Some levels contain Excitebike inspired A.I. racers competing against you, and I’m happy to say that I didn’t really see any rubber banding going in. I can’t tell you how nice it was to have a smartly run race result in a solid victory.

In addition to the single-player mode, there’s also an intuitive level editor that allows you to drive the track as you’re creating it. It’s pretty cool to be cruising along and think to yourself, I need to put a shark tank here, and then a couple of button pushes later there it is. There aren’t a ton of options, but there’s enough to make some impressive tracks. On the downside there’s no dedicated hub housing user-created levels, meaning you’ll need to send/receive them directly to/from other gamers.

Although the game does feature online leaderboards, there is no online multiplayer to be found, which is a bit disappointing. There is a split-screen offline option for racing against your friends (or whooping your significant other in the interests of “completing a review”), but it doesn’t contain anywhere near the depth as the career mode.

Joe Danger is easily one of the Playstation Network’s top exclusive titles, and it’s pretty incredible to think this is the work of just four people. It’s got plenty of content to keep you busy for dozens of hours and is worth every penny of its US$14.99 asking price.

By Herija Green
This entry was posted on Tuesday, June 22nd, 2010 at 2:49 pm and is filed under Herija Green, Video Game Reviews. You can follow any responses to this entry through the RSS 2.0 feed. You can skip to the end and leave a response. Pinging is currently not allowed.