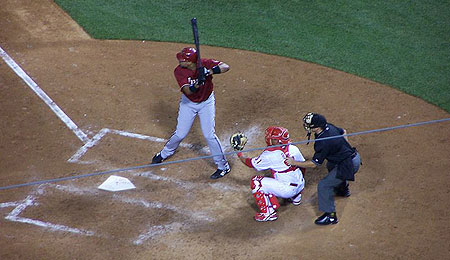 Could Tony Clark stay healthy as a DH? The Twins are considering the possibility.

On the weekend, we took a look at the key remaining American League free agents, in Part One and Two of our examination of the market. Today, we’ll shift our attention to the National League.

Jeff Cirillo: The BoSox are seeking a role player to replace Eric Hinske and Cirillo could fit the bill. Florida also needs someone like this, but Cirillo is likely too old for a club that tends to focus on youth. Despite some key hits, Cirillo struggled badly after being claimed by the D-Backs, and barely wound up getting off the bench, so it’s unclear if he has much left other than being a sparkplug.

Tony Clark: Apparently, Minnesota is desperate enough to be looking at Clark as a possible DH. The Twins also like Luis Gonzalez for that role, so assumedly Clark would be Plan B. Clark can still slap the occasional ball into the gap, and he is somewhat of a power threat, but surely Minny can find better options with actual upside. In reality, Clark is just a bench player at this stage; far too injury-prone for anything more. If being a DH helps keep him healthy, he has a shot to have some value. He isn’t likely to return to Arizona, but could wind up on division rival Los Angeles.

Livan Hernandez: The Mets are talking with Hernandez, but they don’t seem overly driven to land him. Washington is also a possibility, but the fact is that Hernandez’s K rate has dropped so low that I’m quite sure his massive workload is finally catching up. He’s an innings eater at best now.

Bob Wickman: The Pirates are shopping for bullpen help, but Wickman is probably too old and would command too much money for Pittsburgh’s tastes. You’ve got to figure someone will grab him and give him yet another chance to close. The problem is, I have my doubts about his ability to handle a big workload anymore. He’s no longer a closer worth spending much money on, from a fantasy perspective.

Octavio Dotel: Baltimore definitely needs help, but will be cautious about spending too much money on such an injury risk. Milwaukee, having already signed Eric Gagne, might also make a play for Dotel. Colorado is another possible suitor. The bottom line here, however, is that Dotel has only totaled 56 innings pitched over the past three years combined.

Julio Franco: I definitely will be surprised if Atlanta brings back the 49-year-old Franco even though he showed some signs of life with the Braves after sucking most of the season with the Mets. Let’s get real, though. Sure, we’d all love to see him still playing next August when he turns 50, but the bat has already been taken away by the van man.

Ron Mahay: The veteran is seeking a multi-year deal, so that might preclude the Yanks (who need a lefty), who aren’t interested in giving any reliever more than one year. Mahay’s K rate dipped last season, but he’s become a very steady reliever over the past couple of years, so someone may very well offer him more than one year.

Chris Woodward: The Yankees are expected to sign Woodward to a minor league deal. What? An OBP of just over .250 and a BA under .200 isn’t good enough to land a major league contract? What’s up with that?

Cliff Floyd: There seems to be plenty of talk that the Rays will sign him to platoon with Jonny Gomes in right field. Of course, Tampa Bay is also considering Andre Ethier and Geoff Jenkins for RF, among others. Floyd proved he can be productive in a limited role, but ironically, he fared better against lefties than righties last season.

Steve Trachsel: The Rockies are looking for a swingman type, and Trachsel could suit their purposes. He remains as middling as they come, and I still find it hard to believe that his awful command doesn’t come back to bite him in the ERA department, but that’s his skill: bending but not breaking. One of these days, that will burst in a big way.

Eddie Guardado: He was declined arbitration by the Reds, but they still may want to bring him back. The Rangers are a team that’s seeking bullpen help and now that bringing Gagne back isn’t an option, Texas may look closer at Everyday Eddie. He was obviously nowhere near full strength after returning late last season from Tommy John surgery, but if his command can bounce back, he might be useful.

Eric Milton: Milton also was not offered salary arbitration by the Reds, but again, that doesn’t mean Cincy won’t bring him back. Of course, considering he underwent TJS in June and won’t be back until around the All-Star Game or later, the offers won’t exactly be filling up his in-box this winter.

Jeremy Affeldt: After his fine season, it’s looking doubtful that the Rox will be able to retain him, especially since he’s likely after a three- or four-year deal. The Yanks will look at him, but again, New York has expressed hesitance in signing any reliever not named Mariano Rivera for longer than a year. I can’t really blame them; relievers are so inconsistent generally. Not many are worth the risk of a multi-year deal, but that’s where the market is headed as seen in recent years. Affeldt, for his part, proved durable last year, but his fantasy value is very limited as long as he pitches well less than an inning per outing.

Josh Fogg: It’s doubtful the Rockies will bring him back, even though he was strong down the stretch as the team wrapped up a playoff spot. The Cardinals may make a play for him. It’s not a bad idea; he’s durable, even if he doesn’t qualify as much of an innings eater. Fogg has reached double digits in wins five times in past six years, and in this day and age, that makes him a highly sought after commodity, even if he’s not much of fantasy option.

LaTroy Hawkins: The Yankees have reportedly signed him, but the deal is still incomplete. This veteran doesn’t log heavy innings anymore, but he rebounded nicely last year.

Rodrigo Lopez: After elbow surgery, he won’t be able to pitch again until August or later. Colorado could re-sign him, but there’s certainly no rush here. Houston has also been mentioned as a possibility, but it’s doubtful that anyone will offer more than a minor league deal for the rehabbing Lopez, even though he’s twice won 15 games in his career.

Mark Redman: The Rox have already extended a minor league contract offer to the southpaw, and they have hopes he can fill a swingman role. As pathetic as he was with the Braves, Redman was a bit of a revelation in his late-season cameo with Colorado.

Next up, we’ll tackle the rest of the Senior Circuit.

By RotoRob
This entry was posted on Wednesday, December 12th, 2007 at 3:07 pm and is filed under BASEBALL, RotoRob, Rumours. You can follow any responses to this entry through the RSS 2.0 feed. You can skip to the end and leave a response. Pinging is currently not allowed.