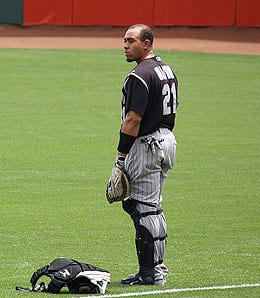 I need guidance on how to improve upon my standings and become master of my H2H, 20-team league, which uses 23 players maximun, daily. Currently, I’m in the upper middle on offense, but am lower than lowest for all pitching.

What can I do to better my team to win great pride and honour?

After a quick review of this team, the first thing that is very apparent is that from an offensive perspective, for a 20-team format, this roster is loaded. Most teams can only dream of having Pedroia, Tulo, Votto, Bourn, and Abreu rostered in this type of format. You should rock and roll right to the top or very near it in all five categories.

With each and every reaction there is an equally opposite one and with your offense being such a huge strength there had to be a dilemma, and we’ll call that pitching. My focus would be on ramping up the starting pitching. In this format, wins and strikeouts are going to have to be your friend, so let ‘em rip each and every week and, if possible, add one or two starters to your bench.

If you can finish strong in those two pitching categories each and every week it should leave you in decent shape considering the huge hitting numbers that you can roll out. In a H2H format, Contreras has virtually no value with Brad Lidge now back, unless you believe that Lidge won’t stick as the closer. Now if Contreras isn’t garnering saves what value does Axford have? One closer is a waste of roster space in this format. You need two going to gain points in that category on a weekly basis. I’d look at trading Axford for a starting pitcher and cutting Contreras for the same. I believe this then affords you the best overall opportunity to dominate your league and roll onto victory.

Thanks for publishing my last question. 🙂

You said Shaun Marcum and Alfonso Soriano are a better fit…does that mean that Zack Greinke would be too much for Manny Ramirez? I got just that offer for Greinke.

Keep in mind that I need power, ribbies and doubles and triples.

Even though Greinke has struggled (although he looked much more like his old self in his last start), I think Manny is simply not enough at this stage. Greinke has the potential to carry a Fantasy pitching staff (12 Ks in his last start) and although Ramirez is heating up and has smacked a couple homers in his last two games, he just doesn’t fill me with confidence. He’s 38 now and the potential for him to miss time just scares me. It’s a tough call but after that 12-strikeout effort I’d be shooting for something a little bit higher on the food chain if I were dealing Greinke (Mark Teixeira, maybe? He’d be a good buy-low candidate).

Who do you like better? Lyle Overbay, Justin Smoak, Gaby Sanchez, Blake DeWitt or Travis Hafner? I need HRs, RBI and OPS for a 12-team, 6×6 Roto mixed league.

Also, I’m staring at Pedro Alvarez…will he have an immediate impact? I could drop Smoak or Freddy Sanchez for him.

Let’s take a look at some possible solutions. Looking at the five bats you have the option of acquiring, I think we have to be looking at either Overbay or Sanchez. Overbay got off to a horrid start, but seems to have turned the corner as of late. Sanchez has been plugging along at a steady pace this season and has provided decent returns for those that have stuck with him. I’d be looking at Sanchez as my preferred choice simply because I believe he will provide a higher level of consistency over the duration of the season. He also can run so expecting five to ten stolen bases over the long haul is not out of the realm of possibility — something Overbay won’t give you.

Part two of you query looks at Alvarez. The 23-year-old was playing exceptionally well at Triple-A Indianapolis: 13 homers and 53 RBI with four thefts and a solid 896 OPS is nothing to sneeze at. More importantly, the Pirates didn’t call him up to sit on the bench and be a spectator. Note that Aki Iwamura was DFAed this week. The Pirates have committed themselves to the kids — a very smart move — and are now going to give them the opportunity to get in some serious playing time. With playing time comes opportunity and with opportunity comes counting statistics. Freddy Sanchez is what he is – hollow batting average. He has never been a power threat and coming off shoulder surgery he is not likely to show us any power in 2010 or, for that matter, at any time in the future.

Alvarez’s immense potential makes dropping Sanchez an easy decision. Even if the kid struggles, there will always be opportunities to find a Sanchez-type replacement on your league waiver wire. Find your way to the waiver wire or spend the FAAB cash, but get the Alvarez rostered ASAP.

By Tim McLeod
This entry was posted on Friday, June 18th, 2010 at 1:08 pm and is filed under BASEBALL, Dear RotoRob, Tim McLeod. You can follow any responses to this entry through the RSS 2.0 feed. You can skip to the end and leave a response. Pinging is currently not allowed.