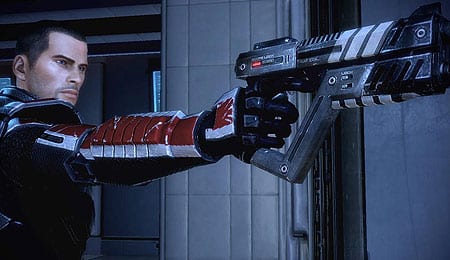 You don’t tug on Superman’s cape, you don’t spit into the wind, you don’t pull that mask off the old Lone Ranger, and you don’t mess with Commander Sheppard…

Back in late 2007, BioWare released Mass Effect, a shooter/RPG hybrid that was announced as the first chapter in a planned trilogy. The original was a revelation in many ways, giving legitimate weight to your decisions throughout the game while introducing a fantastic cast of characters and locales. Some technical issues and bland planet exploration dampened the enthusiasm of some, but it still earned nearly universal acclaim from reviewers and gamers alike.

Fast forward a little over two years, and the long-awaited Mass Effect 2 has been unleashed. The sequel picks up where the original left off in telling a compelling tale while once again putting all of the game’s key decisions in your hands. BioWare has also done a tremendous job of addressing the criticisms leveled at the first title, creating a surefire contender for Game of the Year and arguably one of the greatest experiences in gaming history.

If you stripped away all the cinematic elements of Mass Effect 2 what you’d be left with is a solid shooter, and therefore fans of that genre will find the controls familiar. You’ll always have a targeting reticule as long as your gun is drawn, but by holding down the left trigger you’ll zoom for more accurate aiming. Firing is handled with the right trigger. Tapping X will reload your gun, and if you hold X down you’ll switch to your previous weapon. You can also melee (B) your enemies if they get too close.

Mass Effect 2 definitely takes some cues from the Gears of War series with the vast majority of your firefights taking place behind cover. Pressing “A” near anything your character can hide behind will send them into cover — you can then leave by either pressing B or moving the left stick away. You also have the option of climbing over your cover by hitting “A” again. This is actually the only notable sticking point with the controls as there are times you will sprint (also mapped to the “A” button) into cover and instead of nestling behind it you may find yourself vaulting over it into oncoming fire. It doesn’t happen too often, but it can be annoying, especially during intense battles.

Stepping away from traditional shooters, you’ll also find you have powers that can be accessed for both you and your two squad mates by holding down the right bumper. This includes unleashing biotic powers (such as pulling an enemy from cover), equipping different types of ammo and more. You have the ability to map three of your powers to hot keys (Y, LB, RB), allowing gamers to utilize their most frequently used skills without using the power wheel by tapping the assigned button. Switching guns is done by holding down the left bumper, and the d-pad can be used to issue basic commands to your team such as to follow you or move to a specific location.

While there are certainly games out there with better graphics, Mass Effect 2 does a tremendous job when it comes to the detail and polish that help create a unique universe which is both incredibly deep and diverse. You’ll visit numerous planets during your quest, some civilized and others not so much, but they all feel as though they’re being inhabited. Machines show decay, some species live in squalor amid crime and corruption while others dwell on beautifully maintained worlds. However, even with the stark differences from one environment to the next the technology creates a common thread — the computer systems, weaponry, armor and Omni tools are exquisitely detailed in making all the diverse locales feel like they’re part of one universe. A byproduct of creating that level of familiarity across numerous planets is that it makes the encounters with truly alien technology feel that much more foreign.

The aliens themselves all look excellent with distinct personalities. Salarians are intelligent, Asari are sensual creatures that live unusually long lives, and the Krogan are hulking warriors that respect strength and embrace combat. Beyond the races seen in the original, the sequel also introduces some new, largely adversarial extra terrestrials, including the game’s primary protagonist, the Collectors. As usual, all of the additions are given their own history and culture, which helps in explaining their role within the world of Mass Effect.

However, although BioWare’s fantastically designed and implemented alien races look amazing, their human counterparts can be hit or miss. The two areas you’ll notice most are their hair and teeth, neither of which look particularly natural, especially on the peripheral characters you meet during your journey. The main character, Commander Sheppard, also has an unusual looking run as he moves through levels and his sprint, while better than the original, is also a bit off. Still, this amounts to little more than nitpicking given the game’s overall visual aesthetic.

A few months back I wrote in the Episodes From Liberty City review that when it came to voice acting there was Mass Effect, the Grand Theft Auto series and everyone else. Well, after hearing the voice work in Mass Effect 2 I feel compelled to amend that and say that BioWare has created the best, most compelling dialogue I’ve ever heard in a video game — leaving even Rockstar in the rear view mirror. The words come so naturally that you’ll find yourself nodding your head even as completely abstract concepts are seemingly explained with ease. It’s an absolutely incredible feat.

BioWare spared no expense in snaring some big names to voice key supporting roles, including veteran actor Martin Sheen, Carrie-Anne Moss, Tricia Helfer and Seth Green. There is simply a staggering amount of dialogue to be found here, especially when you consider that nearly every conversation in the game offers you multiple responses at several different points. Great writing and excellent delivery combine to create compelling characters, which is so vital because at its heart Mass Effect 2 is a character-driven tale. I simply can’t say enough about the job that was done here.

Going beyond the spoken dialogue, gamers are also in for a treat courtesy of an excellent score that really builds tension throughout the adventure. Combine that with great sound effects that cover everything large (explosions and gunfire) and small (ambient noise) and you’ve got a phenomenal all-around audio effort.

Those that played through the first one will have the option of importing their character, which brings with it all the choices you made and creates a unique experience others that made alternate decisions won’t see. Those that are new can start from scratch and will be given the option to select the status of certain characters from the first game along with the state of the universe’s governing body. Once you’ve imported your character or made your choices (including the ability to select six different combat classes for Sheppard) the game begins. Mass Effect 2 picks up two years after the original, and to say it opens with a bang would be an understatement.

Without giving away any plot details let’s just say BioWare creates a good reason for your character to “start over” in terms of abilities. After being brought up to speed by your new allies you’re charged with the unenviable task of saving humanity (if not the entire galaxy) once again. Humans have been disappearing from colonies, and it’s up to you to determine why and then stop it. You’re presented with a ship and two team members to start off with, but from there you’ll need to traverse numerous worlds in an effort to recruit additional allies to aid you on your suicidal mission.

Not surprisingly, few are willing to give their help unconditionally, which means in most cases they’ll need your assistance before offering theirs. As part of this recruiting effort you’ll encounter numerous different species, all with their own motivations for aiding or opposing you. While nearly all of the action in this game boils down to moving from one bit of cover to another and blasting enemies, Mass Effect 2 presents so many interesting scenarios that things never feel bogged down. Plus, the inclusion of biotic and tech abilities (think of Force powers from the Star Wars universe) add another layer of strategy and gives gamers multiple ways to fight battles.

As you talk with your unlikely assemblage of bad asses, you’ll find they each have a story to tell. Past events and deeds haunt some of them and define others. Through these conversations you’ll unlock a series of loyalty missions, which you can choose to complete or not. Of course, by doing them you will strengthen your team along with adding an ability to each of their repertoires. As enjoyable as the main story is, a strong case can be made that the loyalty missions are the game’s high point.

It’s during these quests that your squad becomes even more defined. Their frailties and strengths are brought to the forefront, and it’s an absolutely fascinating ride. One story has you trying to help a hardened assassin reunite with his estranged son, who is on his way down the same path. Another has you defending a team member that has been accused of treason. Ultimately many of these loyalty quests revolve around family issues, but despite the common thread they’re all unique to the character and never feel recycled or familiar.

Exploration also plays a fairly large role in Mass Effect 2, as you’ll open up side missions via emails you receive or conversations you have on one of the primary worlds. You can also scan any of the dozens of planets in the Milky Way, some of which contain their own side quests. Scanning those planets is also the primary way to acquire the elements needed to research upgrades for your squad and ship. It can become a little tiresome to manually scan each one, but those that are patient are rewarded with enough materials to max out their various weapons and armor.

All told, I spent over 45 hours before beating the game, but additional content is already available via the Cerberus Network, which is included with the purchase of a new game. Additional free downloadable content is also already on tap, which is great news after the pledged support for the original fell well short of expectations.

However, it’s more than just the promise of more content that gives Mass Effect 2 its replay value. Instead it’s the amount of choices that BioWare puts at your fingertips throughout the adventure that can and will dramatically alter your individual experience with the game. Just as a small sample size I played through the final mission a couple times and watched drastically different outcomes. Plus, the fact that all these decisions will carry over to the already announced Mass Effect 3 lends them even more weight.

Any fans of the original that haven’t already picked up the sequel may find it a bit lean on the role-playing aspects found in the first, including grinding for experience and sorting through a nearly endless array of weapon drops. I can honestly say, though, that while I did miss some of those elements, the streamlined gameplay of Mass Effect 2 eventually won me over.

Ultimately Mass Effect 2’s greatest achievement is how it makes itself a very personal experience. Seeing the Sheppard I created in the original carry forward with the same look (albeit with some new scars) with all the choices I made rippling through the sequel truly made me feel like I was playing something unique to me. It’s a beautiful cinematic experience that breaks new ground for the industry and is the kind of game that should cause console gamers that don’t own an Xbox 360 to pick one up. It’s easily one of the best games I’ve ever played, and I can’t wait for the final installment.