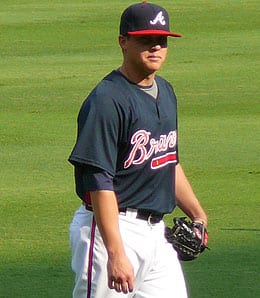 Kris Medlen’s recent success in the rotation is worthy of your attention.

The time has come for the kids to start getting the call and in one of the most highly anticipated debuts in many a moon young phenom Stephen Strasburg takes to the hill Tuesday in his MLB debut against the Pirates. Don’t worry about owning him if you don’t already as he’s currently been scooped up in 92 per cent of leagues playing at CBS. There will be plenty more prospects getting the call in the next several weeks likely including Mike Stanton, Jeremy Hellickson and Carlos Santana. Spend the FAAB money now or use the waiver wire priority and get these kids rostered. The upside potential is simply too high to be ignored.

Without further ado, let’s take a look at some of this week’s waiver wire recommendations.

Kris Medlen, SP/RP, Atlanta Braves: Medlen has now amassed four consecutive quality starts since being shifted from the bullpen to the rotation to replace the injured Jair Jurrjens. He has allowed only two earned runs in three of those four starts and a scant nine free passes in 48 1/3 IP overall this season is a huge key to his success. With Jurrjens slated to be returning mid-June, the Braves have a very interesting dilemma that most teams would love to be facing. Medlen should be rostered in all formats even knowing he could be returning to the pen in the next couple of weeks.

Neil Walker, 2B/3B, Pittsburgh Pirates: The Pirates’ first round pick in 2004 (11th overall) was enjoying a very mediocre career up until this season. He got off to a hot start for Triple-A Indianapolis and simply hasn’t slowed down. Since being recalled by the Pirates, Walker has now replaced Aki Iwamura at second base, gaining eligibility in most leagues at both middle and corner infield – a nice bonus. He’s currently batting a superb .359 with one homer and five RBI. Get Walker rostered in all formats and enjoy the streak.

Jake Arrieta, SP, Baltimore Orioles: The Orioles are struggling to say the least. Chris Tillman hasn’t got it done since his recent promotion and, after a promising stint, Brad Bergesen has lapsed into his old ways. The 24-year-old Arrieta is next in line to get the call. In 71 IP at Triple-A Norfolk, he’s posted a 6-2 record while allowing 45 hits and 34 walks and striking out 62. In an interesting bit of news, Arrieta pitched two innings in a relief role on Saturday. Is this a tune-up for a promotion to the Orioles this week? I think so, and those in AL-only and deeper formats should take the plunge and get him rostered for the upcoming period.

Lyle Overbay, 1B, Toronto Blue Jays: After an abysmal start to the 2010 campaign, Overbay has now gone 13-for-28 with two homers and six RBI over the past seven games. An adjustment in his stance is rumoured to have sparked the resurgence and, like all the Jays, he is currently on fire. Overbay has turned the corner and is a solid option in both AL-only and leagues requiring corner infielders.

Kelly Shoppach, C, Tampa Bay Rays: The Rays activated the 30-year-old Shoppach Friday and are now faced with an interesting dilemma. John Jaso has filled in very ably in Shoppach’s absence and Dioner Navarro could be looking for a new home to hang his hat in the not-so-distant future. Shoppach has managed to hit 35 long balls over the past two seasons and can’t be ignored in AL-only and two-catcher leagues.

Mark Ellis, 2B, Oakland Athletics: Since returning from the hamstring injury that forced him to miss a month, Ellis has returned to form by hitting one homer and driving in eight runs with a great .314 BA. He has posted double digit home runs in each of the past five seasons, an asset that shouldn’t be ignored in both deep and AL-only formats.

Felipe Paulino, SP, Houston Astros: Ignoring the fact that Paulino just won his first game of the season Friday after seven losses, the underlying peripherals tell a bit of a different tale. He now has put together a nice little string of four quality starts and, in 67 1/3 IP, is sporting a 4.01 ERA and 1.40 WHIP with 61 strikeouts. Paulino’s walk rate is high, but in both deeper formats and NL-only formats the value of his high strikeout rate simply can’t be ignored.

Nick Hundley, C, San Diego Padres: Hundley is undervalued, underappreciated and — most importantly — under owned. He’s currently rostered in a ridiculous 12 per cent of leagues playing at CBS. What’s up with that? In his past ten games, Hundley is tearing the cover off the ball to the tune of a .483 BA with one homer and nine RBI. He’s now brought his season average up to .308. For the 88 per cent that didn’t listen to our advice at the end of April, get with the program and get him active in all two-catcher and NL-only leagues.

Chris Coghlan, OF, Florida Marlins: The slump that started with Day One of the 2010 campaign appears to be over. The 2009 NL Rookie of the Year is now back on track and after an April that saw him struggle and fall short of the Mendoza line, is now up to a .259 mark on the season. In his past ten games, Coughlan is batting .450 with one homer, eight runs scored and a couple of thefts. He’s back at the top of the order for the Fish and should be owned and active in all formats.

Freddy Sanchez, 2B, San Francisco: In his past ten games, Sanchez is spraying the ball all over the park to the tune of a .445 BA. He is what he is, an all-average no-power middle infielder that will contribute in two categories for Fantasy teams. Sanchez might not be a huge help to your Fantasy team, but at the same time he won’t hurt you either and should be rostered in both NL-only and deep mixed formats.

Brett Myers, SP, Houston Astros: Two Houston pitchers in one Wire Troll? That’s bordering on blasphemy, but you can’t deny that Myers has quietly been performing extremely well for the ‘Stros this season. In 74 IP, he has a 3.04 ERA, 1.39 WHIP, three wins and 59 strikeouts. The 2009 hip surgery seems to have been a success and he should be active in all formats. Houston is in free fall and will be moving players in the near future, so don’t be surprised to see Myers’s value moving upwards in the event he is shipped off to a contending team at the trade deadline.

Brad Lidge, RP, Philadelphia Phillies: It’s worth a quick look to see if Lidge has gotten lost in waiver wire land in your league. He’s a walking band aid, but in two appearances since returning from his most recent elbow woe, he’s been lights out and contributed a save Friday against the Padres, striking out both Adrian Gonzalez and Chase Headley. Get Lidge active in all formats while he’s showing some semblance of health as it might not be a long ride.

Mike Minor, SP, Atlanta Braves: Now here’s this week’s pick for those of you playing in keeper formats. The Braves just keep on churning out great pitching and Minor is continuing that trend. The 22-year-old has managed a mind boggling 91 strikeouts in 63 1/3 IP for Double-A Mississippi. He’s still young and a work in progress, but his current pace dictates a promotion to Triple-A in the near future and don’t be shocked to see him pitching as early as this September in Atlanta (there are many in the Braves’ organization that believe he’s very close to major league ready now). If Minor is not owned, find your way to the waiver wire and get him rostered.

By Tim McLeod
This entry was posted on Sunday, June 6th, 2010 at 1:28 pm and is filed under BASEBALL, The Wire Troll, Tim McLeod. You can follow any responses to this entry through the RSS 2.0 feed. You can leave a response, or trackback from your own site.