Dave Trembley Booted out of B-More 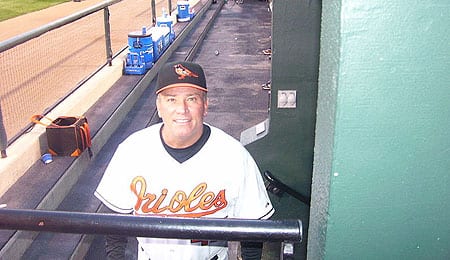 Dave Trembley’s historically bad tenure at the helm of the Orioles is over.

In the least surprising news of the day, Baltimore Orioles manager Dave Trembley was sent packing on Friday, and the team responded under interim manager Juan Samuel by getting humiliated 11-0 by Boston – at home.

This move was perhaps the worst kept secret in baseball, as rumours of Trembley’s demise had been circulating for days. In fact, on Thursday, as I Tweeted the Oriole game, I called him a “Dead Manager Walking.”

The Orioles needed to do something as, while injuries played a factor, the bottom line here is that the losses were piling up and a change was in order.

We’re talking about one of the worst-hitting and pitching teams in the majors here – a true trainwreck as the team careens out of control towards a 13th straight losing season.

I mean, jeez Louise, it’s early June and this team, thanks to a laughable 15-40 mark, finds itself 21 games out already. Twenty-one games off the pace in the first week of June? Woah, that’s some serious stinkage going on.

The O’s just wrapped up a tidy 0-6 road trip, getting outscored 34-8 in the process, and Friday’s loss makes it nine straight defeats overall.

Samuel, previously the third base coach for Baltimore, isn’t likely long for the job. But President of Baseball Operations Andy MacPhail needs to be very careful in picking the right man for the job to guide the Orioles out of this dark period. Among the names being mentioned as possibilities: Tom Kelly (who MacPhail hired to be the long-time manager of the Twins, but a man who has been retired for almost a decade and doesn’t seem interested in getting back into the game), Bob Brenly, Jim Fregosi, Phil Garner, Clint Hurdle, Bob Melvin, Willie Randolph, Buck Showalter, Bobby Valentine, Don Baylor (another manager who worked under MacPhail when the two of them were with the Cubs), Mike Hargrove (who managed the O’s for four seasons) or even Ryne Sandberg (who has risen to the Triple-A level as a manager in the Cubs system).

Whoever takes over this team faces an uphill battle as the club has been besieged by injuries and players who have been squeezing the bat a bit too hard in what’s been described as an “overly tight” environment. The loss of Brian Roberts, limited to just four games this season due to various health woes, has really hurt. But on the plus side, Roberts is expected back within a couple of weeks, and his presence at the top of the Oriole lineup will surely give it the kick start it needs.

Then there’s the absolute mess that is the B-More bullpen. Not that there have been many opportunities to earn saves, but four different Oriole relievers have closed out games this year due to injuries or ineffectiveness. Just when Alfredo Simon stabilized the situation, he went down as did Koji Uehera, who many believe could get the job done as the closer.

The O’s got off to a blazing 2-16 start (one of the worst starts in franchise history) and have kept rolling, going 13-24 since then. Trembley’s final tally? How about a 187-283 mark, good for a .398 winning percentage. For those of you keeping score at home, 294 managers have been at the helm for at least that many games in major league history, and only eight of them have a worse winning percentage. Yikes.

The first order of business has to be trying to figure out a way to get the offense going. The O’s have been shut out five times already and have managed to scrape together just eight runs in the past seven games. As mentioned, the return of Roberts will help, but unfortunately, there’s not a lot of immediate help on the way in the minors. Third baseman of the future Josh Bell is still adjusting to Triple-A. First baseman of the future Brandon Snyder has been a big disappointment at Triple-A, although at least he’s starting to turn things around so he may be a factor in the Show later this season. Outfielder Nolan Reimold, expected to be a big part of the O’s attack this year after such a strong rookie season in 2009, has looked even more lost since he was demoted.

As far as pitching goes, Jake Arrieta is clearly ready to help the rotation, so that’s just a matter of when, not if. I’d also like to see Dennis Sarfate get another shot in the bullpen as he’s been splendid at Triple-A Norfolk, however he’d have to be added to the 40-man roster, which means someone else would have to be taken off.

So those of you who had Trembley as the second manager to get axed this season (after the Royals got rid of Trey Hillman last month) win the prize. Who’s next? Manny Acta will likely be given a bit more rope in Cleveland; I expect him to make it through the season and possibly be replaced in the offseason. Similarly, Brad Mills has to be given a bit more time in Houston given that it’s his first season at the helm. So in my opinion, that leaves Arizona skipper A.J. Hinch as the most likely candidate to get the next pink slip.

By RotoRob
This entry was posted on Saturday, June 5th, 2010 at 1:49 pm and is filed under BASEBALL, RotoRob, Team report. You can follow any responses to this entry through the RSS 2.0 feed. You can skip to the end and leave a response. Pinging is currently not allowed.