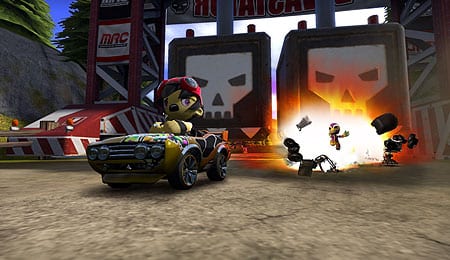 You know what elegance and artistry get you? Carjacked!

If you were to play word association with any gamer and throw out the phrase “kart racer,” they’d almost universally respond “Mario Kart.” And with good reason; Nintendo’s juggernaut has been going strong for 18 years across four generations of home consoles. However, with the release of Playstation exclusive ModNation Racers, Sony and developer United Front Games is looking to change all of that.

Released as part of Sony’s Play, Create and Share initiative, ModNation Racers follows in the footsteps of LittleBigPlanet in putting the power to produce truly original content in the hands of gamers. The result is an endearing title with nearly limitless replay value.

With kart racers aimed at gamers of all ages, simple and accessible controls take on a higher-than-usual level of importance. ModNation Racers delivers on this front with one caveat — at times things feel too touchy, which had me inadvertently weaving around like Lindsay Lohan after a night at Chateau Marmont (too soon?). I also found it odd that, in a game built around customization, there’s no option to remap your controller to fit your style.

The default settings hold up fairly well, however, with accelerating/braking (R2/L2) and boosting (L1) mapped to the shoulders, and drifting/jumping (X), weapons (square) and shields (circle) on the face. You can also sideswipe other karts by flicking the right stick toward the offending vehicle. So while things are still straightforward, there’s some strategy lurking just below the surface.

Although nothing you see in ModNation Racers will wow you with its technical prowess, the game accomplishes what it sets out to do as everything on the screen just screams “adorable.” The tiny little characters and undersized karts are all vibrantly cartoonish, highlighted by some charming cut scenes that play throughout the Career Mode — there’s even an evil monkey! The settings are also distinct with plenty of cute trappings found in and around the tracks themselves.

The aforementioned cut scenes feature some legitimately funny dialogue, which is delivered perfectly by a talented cast of voice actors. Announcers Biff Tradwell and Gary Reasons are great playing off one another and really make you look forward to the next race to hear their banter. The other characters sound great as well, particularly Uncle Richard, who has some of the funniest lines.

ModNation Racers boasts some pretty forgettable tunes, but I never found them annoying. Those that do can take solace in the fact that the game supports custom music. The sound effects are good, if a bit limited, and they’re also critical to your success as you’ll need to use the alert for incoming weapon fire to time your shield use properly.

While most will no doubt be purchasing ModNation Racers for the local and online multiplayer, the game does come packed with a five-circuit, 28-race Career Mode. Each race features three objectives: one to simply advance to the next race and two (payoff and bonus) that require you to rack up a set number of points or meet certain goals while also finishing in first place. In some races there’ll also be a boss racer of sorts. Defeat them and you’ll be challenged to a grudge match. Win and you unlock that character. Needless to say, it’s a lot easier to just advance than it is to complete the secondary objectives and win the head-to-head race.

The carrot here is that by going through the single player story you’re actively unlocking parts that can be used later on when you’re modifying your racer or kart. You’ll also be treated to the humourous cut scenes I alluded to earlier. There’s not much actual story going on here, but the whole affair is being played for laughs anyway and also doubles as a tutorial with your crew chief introducing various gameplay mechanics as you advance.

A word of warning, though, for those thinking they’ll just blow through the Career Mode to unlock everything and move on to the multiplayer: ModNation Racers is difficult. A couple of weeks ago I complained about the rubber banding in Split/Second. Well, let’s just say that the A.I. here is every bit as cheap and even more infuriating because so many things are tied to you winning the race. Come in second and it doesn’t matter if you met all the secondary objectives as nothing unlocks.

The way the races often play out can add to the controller wringing as there’ll be plenty of instances where you carry a lead late in a race only to be waylaid be numerous weapon attacks. Sure, your shield can stop some of them if your meter still has juice in it (you fill the meter by doing things like drifting and catching air), but at times so many will be unleashed you have no chance. Plus, your speed boost is tied to the same meter, which can make for a Catch 22 — Do you risk losing the lead to keep enough in reserve for a shield? Or do you go for it with a speed burst and hope no one has a weapon waiting to destroy you within spitting distance of the finish line?

Weighing these decisions does make for some sneakily strategic racing, though, and it is things like the ability to shield your kart from attacks or collect multiple levels of weapons that help differentiate it from the likes of Mario Kart. Plus, the upside of the maddening difficulty level is that when you do finally win it creates a great sense of accomplishment.

When you’ve decided you’re ready for a break from Career Mode, jumping online to race up to 11 other gamers proves to be great fun. Racing other people rather than cheap A.I. provides a more compelling (and authentic) challenge, and it’s one of the primary reasons this game has such high replay value. Lag was almost completely a non-factor during my forays onto the World Wide Web as well. There’s also offline split-screen with up to four players, though it suffers from some dipping in the frame rate and is a poor substitute for getting 12 karts on the course.

Ultimately, however, what really sets this game apart is the customization — in less than a week there’s been an amazing influx of character, kart and race track designs. In fact, the wealth of options already available reminds me of iPod commercials. Want to race as Iron Man? There’s a Mod for that. Want to drive the Mystery Machine from Scooby Doo? There’s a kart for that. Want to race on recreations of tracks from Mario Kart? Yup, there’s a track for that, too.

The best part about ModNation Racers is how user-friendly the creation process is. For example, designing a track is as simple as driving around an empty space while using the right stick to control elevation. From there you can choose to auto-populate it or micro-manage your creation. The Mods and karts are equally accessible, and you should have no trouble creating something that looks nice in 10-to-15 minutes. And this is coming from someone that has never enjoyed making content for games — Halo 3’s forge? Nope. WWE SmackDown vs. Raw 2010’s create-a-storyline? Maybe next week. But this is so easy and fun that even I was designing stuff (some of it without double entendres!).

Everything is centrally located via the ModSpot, which is the game’s central hub. From there you can jump into the Creation Station or Career Mode, go online, run a single race, see the top original designs, interact with your friends or challenge top times. There’s a ton to do, and with the ability to race user-created tracks online there’s really no ceiling to what can be done.

All that being said, I would remiss if I didn’t mention the interminable load times associated with ModNation Racers. The game’s initial load time can take upward of a minute, and you’ll frequently need to wait 30-plus seconds before a race will begin. By no means should it dissuade anyone from buying the game, but it’s definitely an annoyance.

ModNation Racers isn’t perfect. The load times are too long, the A.I. is cheap and the controls can be overly touchy. And yet, none of that comes close to outweighing the fun you’ll have playing it. It’s a great pickup-and-play title that can be enjoyed by all ages, and the amount of community support this game is already receiving suggests the content stream will be flowing steadily for a long time.

By Herija Green
This entry was posted on Wednesday, June 2nd, 2010 at 11:32 am and is filed under Herija Green, Video Game Reviews. You can follow any responses to this entry through the RSS 2.0 feed. You can leave a response, or trackback from your own site.