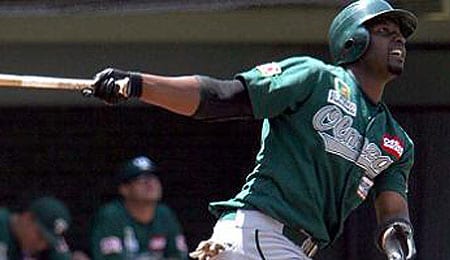 After flaming out in organized ball, Reggie Taylor spent parts of three seasons in Mexico.

It’s only been a couple of weeks since I last checked in on the Indy Leagues, but I came across an item last week that jumped out at me.

Speed was his ticket to the Show – Taylor swiped 40 bags at High-A in 1997, but a lack of patience doomed him – he drew 28 walks against 163 strikeouts in the Show and, even in the minors, his OBP rarely careened above .300.

By 2006, he found himself in Indy Ball and over the next four years, bounced around between the Indy Leagues, the Mexican League and about a third of a season back in organized ball with the Braves Triple-A club.

Now 33, Taylor is back with the Lancaster Barnstormers of the Atlantic League, the same team he turned in an All-Star performance for in 2006. Signed last week, Taylor has wasn’t no time in making an impact, going 4-for-9 in his first two games. He’s probably too old at this point to ever make it back to the majors, but who the hell knows? If nothing else, it’s always nice to keep tabs on former top prospects.

By RotoRob
This entry was posted on Tuesday, June 1st, 2010 at 11:22 am and is filed under BASEBALL, Independent leagues, RotoRob. You can follow any responses to this entry through the RSS 2.0 feed. You can leave a response, or trackback from your own site.