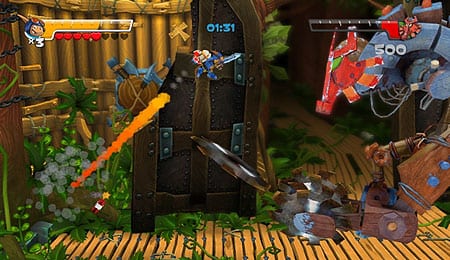 While Sparkster may fight a pseudo-Metal Gear, his game’s graphics doesn’t look anywhere near as good as Solid Snake’s adventures.

Most children of the 1990s remember Sonic The Hedgehog as the pre-eminent Sega Genesis mascot. One of his competitors was Sparkster, an opossum with a rocket pack and suit of armour. Konami’s marsupial with an attitude came and went into the annals of video game history, but now Sparkster’s getting an HD makeover in a brand-new adventure.

Is it worth revisiting, even for people who don’t remember the original? The answer is yes. Rocket Knight, Sparkster’s new PS3/Xbox 360 entry, is as successful a platform/action game as Capcom’s Bionic Commando: Rearmed. While it won’t win any awards for innovation, it’s a fun play for the uninitiated and a must-play for fans of 2D platformers.

One of the few complaints about LittleBigPlanet – the current standard bearer of platforming games – is that the controls can be a little too precise, so much so that they can be over-responsive at the wrong time. Rocket Knight doesn’t suffer from this — movement is crisp and feels solid. In terms of action, it’s what you’d expect from a platformer: one button for jump, one button for attack. Rocket Knight differs by having buttons for rocket boosts (hence, the name) in different ways.

It all works like you’d want from a platformer. Once you get used to the rocket-pack mechanic, you’ll find yourself zooming all over the game map. The responsive controls are necessary, as the action gets in close quarters during some points, and the jump/rocket-boost/attack combination can get frantic. However, you’ll never feel like you’re out of control.

There’s nothing too groundbreaking about Rocket Knight’s control scheme, but it performs its job admirably. That’s really all you can ask for with games of this type.

Let’s be straightforward here: Rocket Knight looks like a PS2 game played on a widescreen HDTV. Models are effective enough to pull off a semi-cel shaded feel, but are not particularly detailed, and larger objects can look blocky at times. Enemies can be repetitive, and the background music is just that – you won’t remember a single note of it, but at least it’s fitting for the tone and pace of the game.

There are occasional graphical pleasant surprises, such as a cartoonish Metal Gear-esque mech coming out to attack Sparkster. These moments don’t occur enough to put the visuals above anything other than functional. Some downloadable games are graphically notable, either because of style (PixelJunk games) or sheer beauty (Trine). Rocket Knight is neither.

When you first start Rocket Knight, it feels like any other 16-bit-era platformer. Jump, avoid bad guys, attack, etc. Then, when the in-game tutorial adds in the rocket aspect, the game opens up. Much like Bionic Commando’s grappling arm, Sparkster’s rocket pack changes how you view the game’s action. Rocket boosts can be used for quick travel, overcoming obstacles, ricocheting off walls, and powering attacks. After a few minutes with the rocket pack, you’ll have Sparkster moving with the speed of Sonic The Hedgehog; unlike Sonic, though, gravity doesn’t confine you to the ground. That means you’ll be playing both vertically and horizontally, and with waves of enemies coming at you across unique level designs, you’ll be making good use of it. Sometimes these waves get too be too much. While Rocket Knight’s gameplay and level design are excellent, enemies can be repetitive, and when yet another wave comes out in one section, it can feel like unnecessary grinding.

Konami breaks up the action when Sparkster takes to the air. In essence, the game becomes a re-skinned Gradius clone, with Sparkster taking the place of spaceship. These levels are a nice change of pace, and they’re fun, but not particularly innovative. Those old side-scrolling shooters were more about pace than invention, and in this case, Rocket Knight fits the mold.

Old-school platforming doesn’t get much better than Rocket Knight. Despite some minor pacing issues and paint-by-numbers graphics, this game is a heck of a lot of fun. If you’re a born-and-bred platform gamer that swears by the phrase “16-bit,” then Rocket Knight will be the highlight of your month. For other gamers, it’s definitely worth downloading the free demo – you might find yourself hooked.

By Mike Chen
This entry was posted on Thursday, June 3rd, 2010 at 10:46 am and is filed under Mike Chen, Video Game Reviews. You can follow any responses to this entry through the RSS 2.0 feed. You can leave a response, or trackback from your own site.