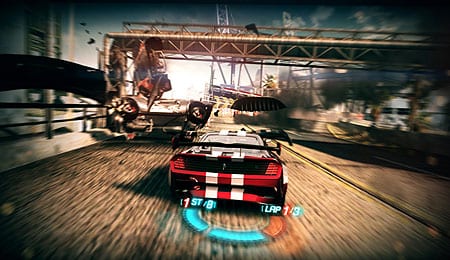 It goes to eleven.

Allow me to say right off the bat that I’ve never been a big fan of racing games — for whatever reason they just haven’t done it for me. In fact, prior to checking out a copy of Black Rock Studios’ Split/Second the last retail racing game I owned was Project Gotham Racing on the original Xbox. A few spins through the demo had me cautiously optimistic, but I was curious how well a game seemingly built around initiating and avoiding gigantic explosions could hold up. The answer: extremely well.

When you’ve got a game built around speed and the need to adjust to your surroundings on a moment’s notice, simplistic and responsive controls become critical. Thankfully, this is an area that Split/Second really delivers. Even as you’re driving through explosions at breakneck speeds, the game never makes you feel like you’re not in control of your car. Sure, you’ll still spinout or get knocked off course at times, but it rarely feels cheap.

The learning curve isn’t very steep, either, making it accessible to all levels of racing enthusiasts. That’s not to suggest you won’t improve as you play the game — you absolutely will — but it doesn’t feel like a major undertaking to become competent on the track, meaning you’ll be drifting around corners and drafting behind cars in no time.

Triggering the game’s signature Power Plays couldn’t be easier. Icons pop up on the screen when your meter is charged and one is available, and you simply press one of the face buttons. The X and square set off the weaker Level 1 Power Plays, while circle unleashes the course-altering Level 2 versions. It’s great fun from the very first race.

If you took a snapshot of the cars and environments found in Split/Second it’s unlikely you’d be overwhelmed. However, seeing the vehicles fly through makeshift tracks as explosions detonate all around you without a hint of slowdown is a sight to behold. It’s also a testament to the clarity of the graphics that you can spot Power Plays just beginning to trigger in the distance and yet also see clearly even as the shit hits the fan everywhere you turn.

One item that is brilliantly designed (and key to enjoying all that visual eye candy) is the streamlined and completely unobtrusive HUD. Instead of plastering information all over the screen, everything is essentially glued to your car’s bumper. The lap you’re on, your current place and the Power Play meter all seamlessly blend beneath your vehicle, making it easy to monitor what’s going on without ever distracting from it.

I already touched on the explosions, but you really need to see them to appreciate just how awesome they can be. Parked cars burst into flames and tumble across your path, buildings crumble to the ground threatening to crush you underneath and massive objects are completely demolished. They’re all rendered beautifully and rate as the game’s visual highlight.

As you might expect from an adrenaline-fueled racing game, the soundtrack is heavy on pulse-pumping beats that look to amplify the experience. The music is a bit repetitive, though given the intensity of the driving itself I often found myself zoning out the tunes and focusing on the action. The sound effects more than hold their own as well with the high-pitched whine of the engine and screech of the tires reinforcing the sense of speed.

When it comes to the actual racing, you’ll find that the driving aspects are fairly basic with most of the strategy and uniqueness coming from the Power Plays. To activate these game changers you’ll need to fill a meter by drifting around turns, drafting behind other cars or catching air. The meter has three sections with Level 1 Power Plays each exhausting one section and Level 2 costing you all three.

Therein lays the strategic element of Split/Second. Do you unleash your Power Plays to take out vehicles that seem to be pulling away from you? Or do you save it up to alter the course and potentially leapfrog the seven other drivers at once? There are numerous chances to utilize Power Plays on every track, and it makes it a constant game of cat and mouse as you’ve got to decide when to hang back and when to push for the finish line. It’s unbelievably satisfying to wreck a first-place car at the perfect moment and catapult yourself into victory lane.

In terms of game modes, a reality television series serves as the backdrop to the primary single-player mode in Split/Second as you’ll play through a 12-episode season. Each episode contains six races, four of which can be selected from the start and two more that must be unlocked. The bonus race will become available once you’ve used your Power Plays to wreck a certain number of rivals.

The elite race is the sixth and final contest, and it’s unlocked by acquiring a set amount of credits. These are earned in the other races, and the higher you finish the more credits you’re awarded. Once you’ve racked up enough you’ll drive head-to-head with the other top racers on the show, and at the end you’re given points based inversely on your finish (first place gets eight points, eighth gets one). You’ll need to finish at a certain level to advance to the next episode, and the points accumulate toward the overall season standings.

Split/Second contains a total of 72 races to compete in during the season and even though things definitely repeat, it manages to keep the experience pretty fresh by mixing in different kinds of challenges. There are two basic types: race and elimination. Race is self explanatory, while Elimination starts off with that same compliment of eight vehicles, but then it starts knocking out the last place car until only one is left. This creates a constant sense of urgency and requires a more aggressive, less strategic approach.

The other four are a bit more unique. Detonator puts you on the track alone for what amounts to a time trial with explosions, forcing you to outdrive the track’s obstacles and beat the computer’s times. Air Strike has you dodging missiles from helicopters hovering overhead, and yes, it’s just as nerve racking as it sounds. I found Air Strike to be the most challenging mode as it requires a lot of precision driving to weave through all those explosions. Its cousin, Air Revenge, isn’t nearly as strong, as it has you dodging missiles to build up your Power Play meter and then miraculously deflecting them back until you destroy the chopper.

That leaves Survival, which was obviously inspired by the chase sequence in Terminator 2 when the T-1000 is pursuing young John Connor through a massive drain. Here you’ll work to get ahead of semi trucks that are tossing explosive barrels at you. Pass one and you’ll be awarded with points and a time bonus. Get struck by the red barrels three times and you’re done. It’s great.

Where some might find Split/Second lacking is in the number of environments (five), track variety (there are 12) and lack of customization for the cars. You’ll unlock up to 30 vehicles as you progress through the season, but the only option you’re given is what colour they’ll be for a given race. No add-ons or upgrades. The game does proudly display all your earned achievements/trophies as decals on your car so others will know what you’ve done, which is nice, though you’re unable to arrange them.

Easily the biggest issue to me, however, is the game’s inconsistent A.I. No matter how well you drive or how many cars you wreck you will never win a race going away. The rubber banding nature of your opponents is downright absurd at times, and it doesn’t return the favour. Therefore, you’ll find most races play out one of two ways: (a) you win narrowly; or (b) you finish well behind the lead car because the computer buried you for a 10-second victory. It does make for a more intense experience knowing the A.I. is always breathing down your neck, but it feels artificial as well.

Split/Second also comes with online multiplayer, allowing up to eight participants and filling in any empty slots with computer-controlled drivers. Online races match or exceed the chaos that permeates the offline component especially given the screw-or-be-screwed nature of the game. I never detected any lag during my online forays, though anyone looking to jump right in should know that you’ll need to play through the season to unlock cars to be used online. And if you think you’re winning a race with the default vehicles, guess again.

There’s a lot to like about Split/Second, and that’s coming from someone that doesn’t typically enjoy the racing genre. By simplifying the driving aspect and adding thrilling explosions, Black Rock Studios has expertly crafted an accessible and, above all else, intense experience that carries mass appeal.