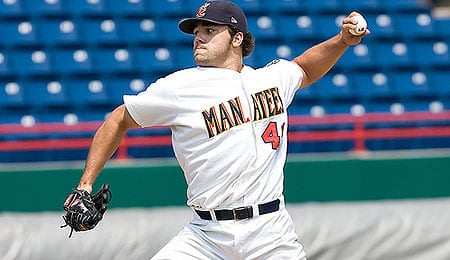 Zach Braddock was sharp in the AFL, carrying that into a filthy good showing at Triple-A, earning a promotion to Sausage City.

I have won one week since Week Two. I am in third place, but double digits behind second. My offensive stats are middle of the pack or worse across the board. My pitching is the only reason I’m even this high at this point.

Expert after expert was telling me to stay put week after week, when I knew trades had to be made. Now I find myself losing in a week that I had to win if I wanted to make up any ground.

This is my roster; what trades do I need to make to improve my team?

When reviewing your roster I have several concerns looking down the road. You have undoubtedly been hit hard on the injury front with the loss of both Rollins and Ethier. Ethier is scheduled to return Monday, while Rollins could be back next weekend. The return of both of these players will make a huge difference to your team.

My first concern, and it’s a rather large one, is Wright. He is currently on pace to approach Reynolds’ strikeout record for the season. Wright’s numbers have been regressing against righthanded pitching for several years, but are now at that stage where they are simply abysmal. He has struck out 53 times in 132 at-bats against righties this season, a shocking 40 per cent of the time. Now take that and add another 400 at-bats (assuming the usual 80-20 split of righties to lefties), and that brings Wright to 200+ strikeouts. Find the Met fan in your league and move Wright to him quick. You have some flexibility in that you can slide Reynolds over to third base so finding a quality corner infielder has to be a priority.

You have a great pitching staff as both your starting rotation and bullpen are solid. Why not look at trying to convert some of that depth into a bit more offense? Currently, Jimenez is the best in the business and his numbers are totally off the charts. His value will never be higher than it is today. See what you can get for him. Maybe a top-tier shortstop and then you don’t have to either wait or worry about the prognosis on Rollins? You have a great chip there and if it gives you the offensive numbers that you need, trade him and get top dollar. Your pitching is both deep and strong enough that you should be able to make this move and better your overall results.

The one thing that I wouldn’t do under your current set of circumstances is stand pat. You need a quality corner infielder and Wright is not the answer. An upgrade there and possibly at shortstop would go along way in improving your chances this season.

What do you think about Zach Braddock in an NL-keeper league?

Roster him up, pronto. Yes, Braddock did implode Sunday against the Mets, but young pitchers will have their ugly moments. The Brewers will need his arm for many years to come and those 28 strikeouts in 16 IP at Triple-A Nashville pretty much says it all about how good his arm is. Braddock allowed eight earned runs in the minors, but if you look carefully, you’ll find that they were all in one major implosion on May 9. The kid has some serious heat and again I’d roster him up immediately, especially in a keeper format. Milwaukee’s relief pitching has been a wasteland this season, so Braddock has a golden opportunity to stake an important role within the Brewer bullpen.

By Tim McLeod
This entry was posted on Monday, May 31st, 2010 at 9:31 am and is filed under BASEBALL, Dear RotoRob, Tim McLeod. You can follow any responses to this entry through the RSS 2.0 feed. You can leave a response, or trackback from your own site.